Successful 3D Printing of One of the Strongest Stainless Steels 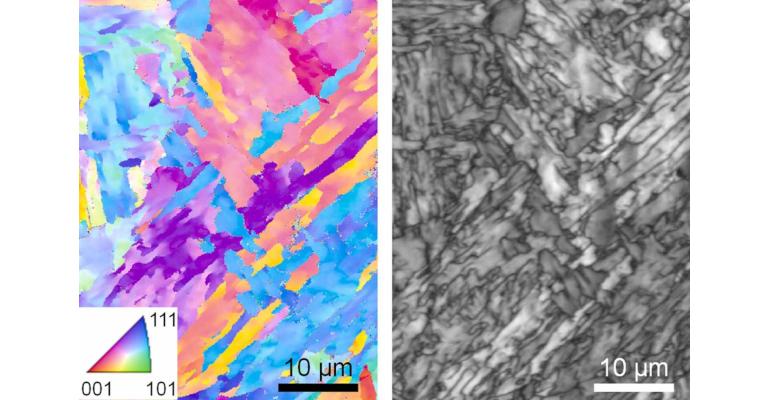 A microscopic image of 3D-printed 17-4 PH stainless steel. The colors in the left-side version of the image represent the differing orientations of crystals within the alloy.
Additive manufacturing can now be used to produce stainless steel material robust enough for aerospace, nuclear energy, and shipbuilding industries.

Researchers have found a way to reliably 3D-print one of the strongest stainless steels that currently exists for parts that can be used in industries in which durability and high quality is essential, such as aerospace and aviation, nuclear energy, and shipbuilding, they said.

Scientists from the National Institute of Standards and Technology (NIST), the University of Wisconsin-Madison, and Argonne National Laboratory have identified particular compositions of 17-4 precipitation hardening (PH) stainless steel that, when printed, match the properties of the conventionally manufactured version, they said. This type of steel is a strong and corrosion-resistant alloy used for building cargo ships, airliners, and nuclear power plants.

The discovery means that for the first time, 17-4 PH steel can be consistently 3D-printed without losing the properties it has that make it well-suited for these critical applications, said Lianyi Chen, a professor of mechanical engineering at UW-Madison who co-led the project.

“Our 17-4 is reliable and reproducible, which lowers the barrier for commercial use," he said in a post on NIST's web site. "If they follow this composition, manufacturers should be able to print out 17-4 structures that are just as good as conventionally manufactured parts."

The results of the research, which is based on high-speed data about the printing process that scientists obtained using high-energy X-rays from a particle accelerator, mean that industries that produce and use 17-4 PH parts can adopt 3D printing in their manufacturing processes to cut causes and create more flexibility, researchers said.

Though manufacturing plastic parts using 3D printing has become more commonplace across industries, working with metal in additive manufacturing (AD) processes—which typically involve powders as their base material—has always been more complex. One of the reasons for this is how quickly the temperature in the printing process shifts, with the powders undergoing a rapid fluctuation in a short period of time, said NIST physicist Fan Zhang, another researcher on the project.

“When you think about additive manufacturing of metals, we are essentially welding millions of tiny, powdered particles into one piece with a high-powered source such as a laser, melting them into a liquid, and cooling them into a solid,” he said in the post. “But the cooling rate is high, sometimes higher than one million degrees Celsius per second, and this extreme nonequilibrium condition creates a set of extraordinary measurement challenges.”

Specifically, this quick heating and cooling process causes the crystal structure of the atoms within this type of steel also to shift rapidly, researchers said. This, in turn, has made it notoriously difficult for them to understand what's happening to the material at an atomic level during printing, and thus unable to create the precise crystal structure—a type called martensite—needed for printing the material at its most optimal, researchers said.

To solve this problem, researchers used a special tool—in this case, synchrotron X-ray diffraction, or XRD—to investigate the crystal structure during the fast temperature changes so they could create the internal structure necessary in a printing process to recreate martensite, they said.

Working at the Advanced Photon Source (APS), a powerful light source at Argonne, researchers smashed high-energy X-rays into steel samples during printing. “In XRD, X-rays interact with a material and will form a signal that is like a fingerprint corresponding to the material’s specific crystal structure,” Chen explained in the post.

In this way, researchers could create a map of how the crystal structure of the steel changed over the course of a print. This revealed how certain factors that they themselves can control—such as the composition of the powdered metal—influenced the process throughout, they said.

While iron is the primary component of 17-4 PH steel, its composition also can include various amounts of up to a dozen different chemical elements. Given a clearer picture of the steel's structural dynamics during printing, researchers could fine-tune the makeup of the steel to find a set of compositions for the metal that allowed them to control the outcome of printing, researchers said. The compositions they came up with include just iron, nickel, copper, niobium, and chromium, Zhang said.

“We showed that, over a wide range of cooling rates, say between 1,000 and 10 million degrees Celsius per second, our compositions consistently result in fully martensitic 17-4 PH steel,” he said.

Moreover, researchers also discovered some compositions resulted in the formation of strength-inducing nanoparticles that, when created using the traditional method, require the steel to be cooled and then reheated. This means that by 3D printing 17-4 PH steel, manufacturers actually could skip a manufacturing step that typically requires special equipment, additional time, and production cost, researchers said.

The team published a paper on its findings in the journal Additive Manufacturing.

Researchers conducted mechanical tests that showed that their 3D-printed steel—equipped with its martensite structure and strength-inducing nanoparticles—matched the strength of 17-4 PH steel produced through conventional means, they reported.

Their approach also can be applied to other materials as well, using XRD to optimize other alloys for 3D printing as well as provide useful information for building and testing computer models that can predict the ultimate quality of printed parts, they said.