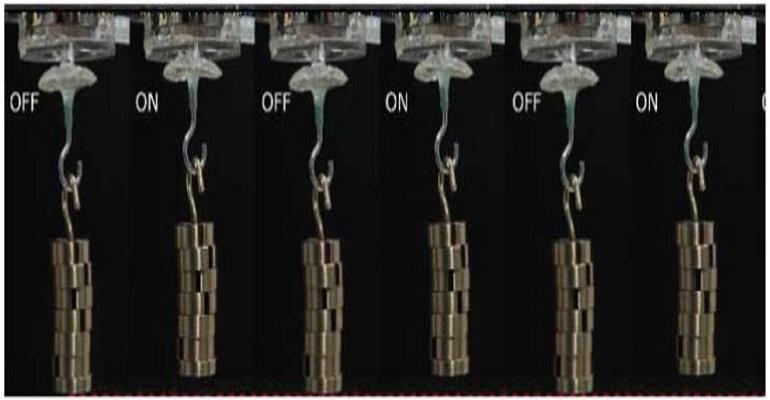 A biosynthetic material developed by researchers at Penn State was used to develop a series of protein-based artificial muscles that showed performance enhancements over biological muscle. Other soft robotic parts could include soft grippers and soft actuators.
Researchers developed a biosynthetic polymer that can heal itself, is biodegradable, and recyclable, making it useful for soft robots and environmentally friendly.

Soft robots are useful for performing tasks their rigid counterparts find difficult, such as navigating small spaces and handling delicate objects. However, repeated activity can wear on the material of their actuators, causing reliability issues and requiring repair of the devices.

To help avoid these problems, researchers at Penn State have developed a biosynthetic polymer that can heal itself as well as has the added benefit of being biodegradable and recyclable, making it not only cost-efficient and useful for soft robots, but also friendly to the environment.

The team was inspired by squid ring teeth—which can heal themselves after being broken—to create the material, which they also envision could be used in hazmat suits and other applications where tiny holes in a material could cause a dangerous situation.

"Our goal is to create self-healing programmable materials with unprecedented control over their physical properties using synthetic biology," Melik Demirel, professor of engineering science and mechanics at the university, said in a press statement.

Researchers developed the polymer in standard bacterial bioreactors using high-strength synthetic proteins that can self-heal both minute and visible damage. The polymer’s structure relies on a series of DNA tandem repeats—or a short series of molecules arranged to repeat themselves any number of times—comprised of amino acids and produced by gene duplication.

By adjusting the number of tandem repeats, Demirel's team created a soft polymer that could not only heal rapidly but also is 100 percent biodegradable and 100 recyclable into the same, original polymer.

Demirel cited a number of reasons for wanting to minimize the use of petroleum-based polymers.

"Sooner or later we will run out of petroleum and it is also polluting and causing global warming,” he explained in a press statement. “We can't compete with the really inexpensive plastics. The only way to compete is to supply something the petroleum-based polymers can't deliver and self-healing provides the performance needed."

Key to creating a useful self-healing material is the time it takes for the healing to occur, with shorter time spans, of course, being optimal, said Abdon Pena-Francesch, a former doctoral student in Demirel's lab who worked on the research.

In the case of the polymer developed by the team, the material uses an application of water, heat, or light for near-instantaneous healing, reduced from a typical 24-hour healing period, he said.

"In nature, self-healing takes a long time,” Pena-Francesch said in a press statement. “In this sense, our technology outsmarts nature.” The healed part of the material also shows the same strength that it displayed in its original form, Demirel added.

Regarding the recycling of the polymer, Demirel pointed out a unique aspect of the material. Many petroleum-based polymers can be recycled; however, they are typically recycled into something different—i.e., plastic bottles are recycled and turned into clothing or shoes.

In the case of the biosynthetic polymer the Penn States team developed, it can eventually be recycled back into the same, soft-healing polymer even after use, Demirel said. This is achieved by the addition of an acid-like vinegar, which turns the polymer into a powder that can be manufactured back into its original material, he said.

Researchers at the Max Planck Institute for Intelligent Systems in Stuttgart, Germany, have been working with the polymer, creating holes and healing them and seeing how the material responds.

They also created soft actuators that indeed could heal themselves in about one second, said Metin Sitti, director of the Physical Intelligence Department at the institute.

The material’s performance in these tests shows promise for its use to develop “robust and fault-tolerant soft robots and actuators” in the future to advance robotics, Sitti said.