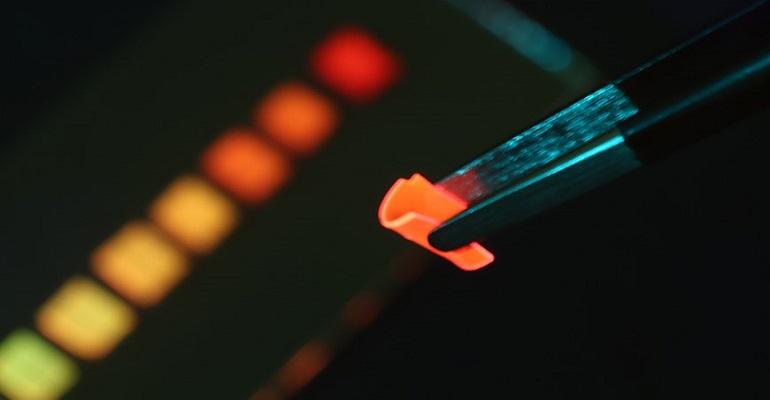 Shown here is a newly developed solar concentrator developed by researchers at the Swiss Federal Laboratories for Materials Science and Engineering (Empa) and ETH Zurich and irradiated with blue LED light. The polymer material is so flexible that it can be bent with tweezers. Researchers said it can be used to turn textiles into solar-based power sources.
A polymer material developed by researchers in Switzerland can turn clothing into energy-generating solar power sources.

Smartphones are almost ubiquitously with us these days, but their batteries still don’t ever seem to last long enough to meet our daily needs without needing a recharge.

That’s why it would be handy to charge your smartphone directly with whatever clothes you happen to be wearing, which is the promise of new technology developed at the Swiss Federal Laboratories for Materials Science and Engineering (Empa) and ETH Zurich.

An interdisciplinary research team led by Luciano Boesel from Empa’s Laboratory for Biomimetic Membranes and Textiles has developed a new type of polymer that can be applied to textile fibers for the development of clothing such as jackets, T-shirts, and other items that can generate solar energy and serve as a mobile energy supply.

The technology builds on existing materials that use indirect or ambient light to generate energy. They contain luminescent materials and thus are dubbed luminescent solar concentrators (LSC), capturing diffuse ambient light and transmitting its energy to a solar cell where it’s converted to electricity.

Related: Ultra-Thin Solar Cell Is Waterproof, Stretchable for Repeated Wash and Use

While these materials are certainly useful to providing solar energy in conditions where there isn’t abundant sunshine, they haven’t yet been useful for use in textiles because they are only available in rigid components and thus can’t bend and flex. They also aren’t permeable to air and water vapor, which makes them unsuitable for this use.

To solve these issues, Boesel’s team combined several types of luminescents into a polymer that can provide the flexibility and air permeability necessary for integration into textiles.

The new material is based on amphiphilic polymer co-networks (APCN), a polymer that’s already being used commercially in silicone-hydrogel contact lenses. Researchers chose this polymer because they could incorporate two immiscible luminescent materials at the nanoscale and let them interact with each other.

“There are, of course, other polymers, in which these materials could be integrated; but this would lead to aggregation, and the production of energy would thus not be possible,” he said in a press statement.

Specifically, the team—which encompassed researchers from several Empa labs of various disciplines—added two different luminescent materials to a gel material, turning it into a flexible solar concentrator. In tests, the luminescent materials functioned on par with rigid, large-scale light collectors to capture a much wider spectrum of light than is possible with conventional photovoltaics.

The team published a paper on their work in the journal Nano Energy.

Researchers said that the solar concentrators can be applied to textile fibers in a way that makes them conducive to developing clothing, as they don’t become brittle or susceptible to cracking or accumulating water vapor in the form of sweat.

Researchers hope they one day can be used in the production of textiles that will help meet the ever-increasing demand for energy on the go, particularly for portable devices.