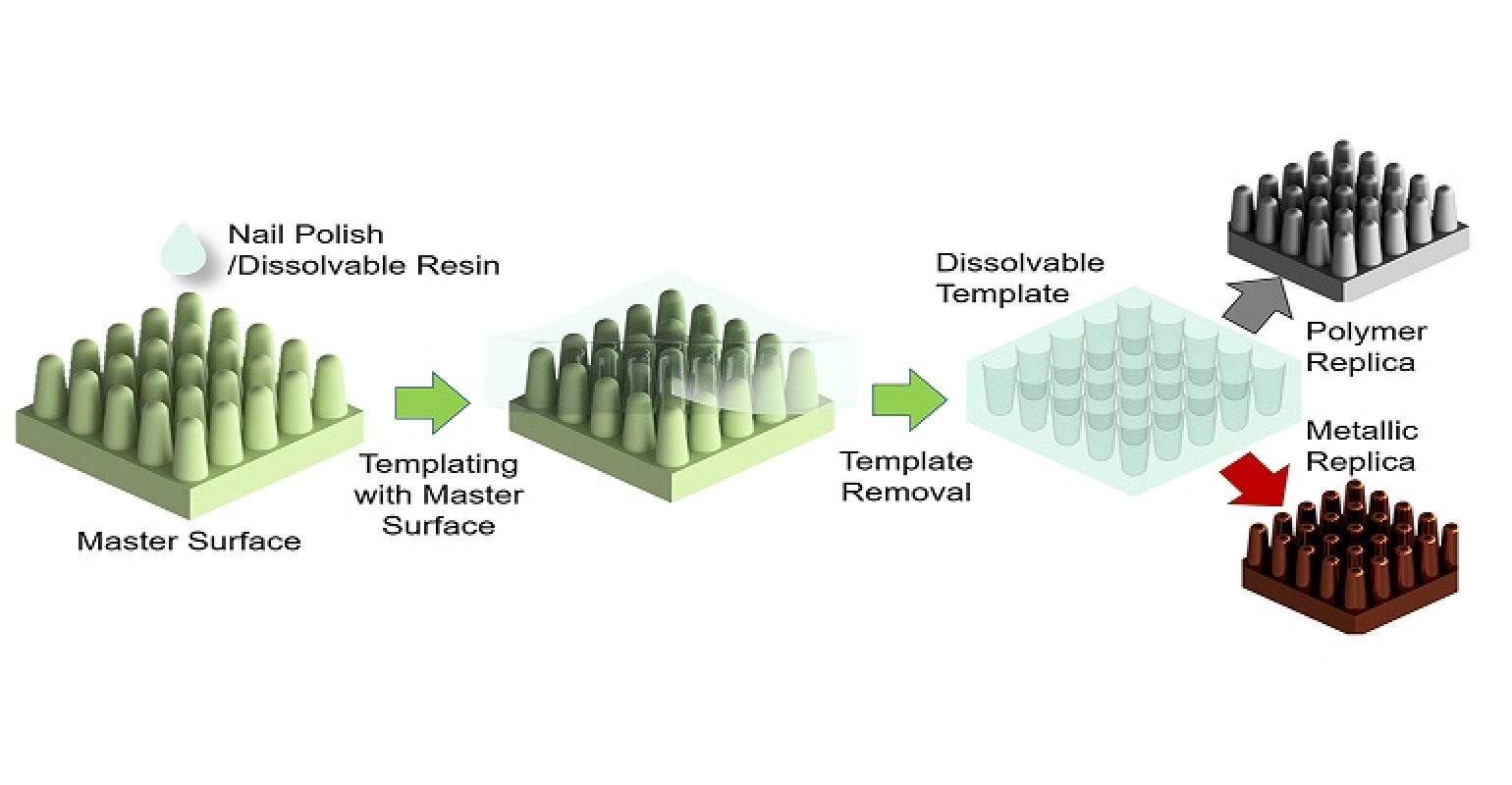 A schematic showing the nanoimprinting lithographic fabrication process of the nanopillars found on the wings of cicadas.
Researchers have fabricated nanostructures from the insect’s appendages that repel water and bacteria using common materials.

The wings of a cicada are the influence for a breakthrough in the development of new materials that can repel water and prevent bacteria from staying on its surface.

A multi-institutional team of researchers from the University of Illinois at Urbana-Champaign and the U.S. Army Corps of Engineers invented a new technique that can reproduce the same nanostructures found on cicada’s wings using common household products.

The research paves the way for waterproof material that can be used to fabricate a versatile array of next-generation waterproof products, said Marianne Alleyne, an entomology professor at the University of Illinois at Urbana-Champaign.

Repelling water in the same way that a cicada’s wings do “is a highly desirable property that will be useful in many materials engineering applications, from aircraft wings to medical equipment,” she said in a press statement. Alleyne co-led the study with Donald Cropek, of the U.S. Army Corps of Engineers’ Construction Engineering Research Laboratory, and Nenad Miljkovic, a professor of mechanical science and engineering at the university.

Specifically, the team used the wings of Neotibicen pruinosus for inspiration; the insect is an annual cicada found in the U.S. central region.

The work builds on past research by the team which already demonstrated that it’s these nanostructures on the insect’s wings that allow them to repel water.

Typical nanoimprinting is not a simple affair. It requires a lot of labor and is expensive, and some approaches use toxic materials or high temperatures.

The team used a simplified version of the process that allowed them to fabricate the nanostructures in an open lab at room temperature and atmospheric pressure using common materials that wouldn’t harm the original organic sample from the cicada. “We use nail polish and rubbing alcohol, which does not inflict any damage to the delicate wing nanostructures,” Cropek said in a press statement.

To develop the template for the nanostructures, researchers applied a quick-drying and carefully chosen nail polish directly to a cicada wing, which they then left to cure at room temperature. Once completed, the template can be coated with a polymer or metal that then can be dissolved away, leaving only the replica metal or polymer.

To demonstrate the technique, researchers used two types of very different replica materials copper metal and PDMS, a silicon-based organic polymer. Their experiments proved that the method is compatible with both, showing its versatility.

“We don’t know if it is the chemicals on the wing’s surface or the physical nanostructures, or a combination of both chemistry and topography, that produce the bactericidal activity, but being able to produce materials with different chemistries and structures will help us answer that fundamental question,” she said in a press statement.

Ultra-Thin Solar Cell Is Waterproof, Stretchable for Repeated Wash and Use
Dec 12, 2017