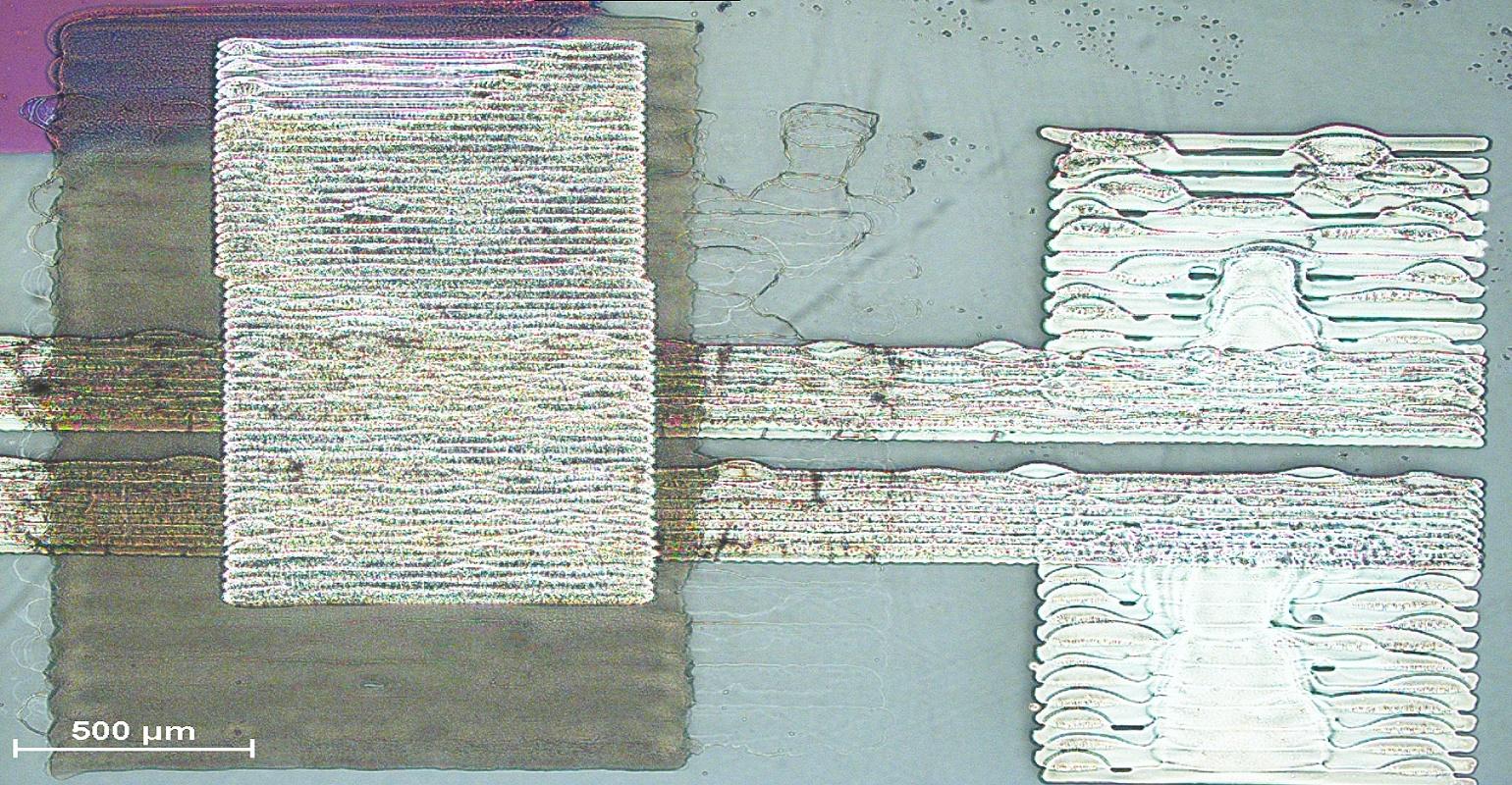 A representative arrangement of graphene flakes in ink-jet printed graphene between two contacts (green) in a method developed by researchers at the University of Nottingham. Color gradient corresponds to the variation of flake potentials.
Researchers use flakes instead of sheets of the 2D material to optimize the fabrication of next-generation electronic devices.

Researchers have developed a new way to 3D print tiny, complex electronic devices using a combination of a versatile 2D material and a common printing process.

A team at the University of Nottingham used graphene, a material with high electrical conductivity, in an ink-jet printing process to build up mesh together electronic structures that can perform functions such as converting light into electricity.

The approach demonstrates a new way to use the material for 3D printing processes as well as provides insight into the design of next-generation electronic devices, researchers said.

Led by Professor Mark Fromhold, head of the university’s School of Physics and Astronomy, the team used quantum mechanical modeling to identify how electronics move through 2D-material layers, allowing them a new understanding of how to print and modify devices using graphene.

“According to the laws of quantum mechanics, in which the electrons act as waves rather than particles, we found electrons in 2D materials travel along complex trajectories between multiple flakes [of graphene],” Fromhold explained in a press statement. “It appears as if the electrons hop from one flake to another like a frog hopping between overlapping lily pads on the surface of a pond.”

Graphene has a unique combination of properties that make it extremely useful to materials scientists. In addition to unprecedented electrical conductivity properties, it also is stronger the steel and extremely flexible.

However, to successfully layer graphene—which is how most 3D printing methods build objects—is a complex endeavor that typically entails deposition of the layers one at a time and by hand.

What Fromhold and his team achieved is that a solution to using graphene in additive manufacturing processes may be to use it in the form of tiny flakes—a few billionths of a meter across—that are suspended instead of layered, researchers said.

The team combined this new manufacturing method with quantum wave modeling to deduce how inkjet‐printed graphene can successfully replace single-layer graphene as a contact material for 2D metal semiconductors, said Lyudmila Turyanksa, a researcher at the university’s Center for Additive Manufacturing.

This is where the identification of how electrons move through 2D materials is a key aspect of the work.

“While 2D layers and devices have been 3D-printed before, this is the first time anyone has identified how electrons move through them and demonstrated potential uses for the combined, printed layers,” she said in a press statement.

The achievement paves the way for applications for inkjet‐printed graphene‐polymer composites and a range of other 2D materials, she said. Moreover, the process could be used to design a new generation of functional optoelectronic devices, such as large and efficient solar cells; wearable, flexible electronics powered by solar cells or motion sensors, and even printed computers.

Researchers plan to continue their work to improve some aspects of the process. These include better control of the deposition of the flakes by using polymers to influence the way they arrange and align. They also plan to test different inks with a range of flake sizes.

The team also hopes to create more sophisticated computer simulations of the materials and the way they interact so they can mass manufacture prototype devices.