Lasers Could Be Key to Providing Clean Water to the World 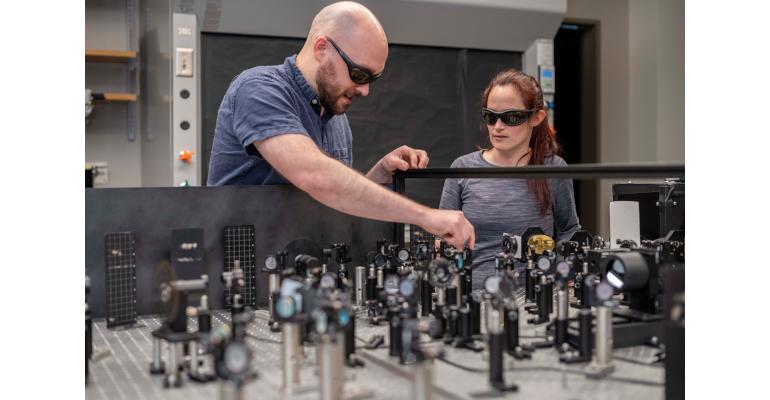 Dugan Hayes and Cali Antolini using a technique involving laser pulses fired at intervals on the order of quadrillionths of a second, can investigate chemical reactions driven by light.
Researchers uncover details of how iron interacts with light to purify water, paving the wave for more cost-effective solutions.

Despite how advanced the world is technologically, many people still don't have access to a basic necessity of life—clean water. Yet to ensure that everyone will have this access in the future, it will require ingenuity in terms of technology to make it happen.

Researchers from the University of Rhode Island (URI) have been working on this problem using a form of iron called ferrate, which can be used as a water purifier that is both less toxic and less expensive than current, typical water-purification treatments. However, there is one caveat to using ferrate—to work in an optimal way, it must be combined with other compounds, or use light energy as a catalyst to cause the appropriate reaction. Only then can it be used to purify water in a way that creates fewer toxic by-products than chemicals like chlorine and is more cost-effective than complex ozone treatment systems, according to scientists.

This reaction between ferrate and light has been a bit of a mystery to scientists, however. But now, the URI team has revealed new details about the reaction that occurs when ferrate is exposed to visible and ultraviolet light using a technique they invented that involves ultra-fast laser and X-ray pulses, they said.

“In this study, we were able to reveal some of those photophysical properties for the first time," said Dugan Hayes, an assistant professor of chemistry at URI, in a press statement. The research can help pave the way for new ways to optimize the use of ferrate in water-treatment solutions that are more broadly accessible, he said.

To investigate ferrate, researchers had to take into consideration that even without using light, it's a strong oxidant, which means it can break down contaminants by stealing their electrons. However, when excited by light, the iron produces an even more powerful oxidant known as Fe(V), or iron-5+, which is what the team wanted to explore more in depth, they said.

Previously, however, scientists didn't know how much light energy was required to produce Fe(V) nor how much of it could be produced. The team set out to find out, with Cali Antolini, a Ph.D. student in Hayes’ lab, leading experiments using both transient absorption spectroscopy at a URI lab and X-rays at Argonne National Laboratory’s Advanced Photon Source in Chicago, where she is a research student.

Transient absorption spectroscopy uses ultra-fast laser pulses to investigate photochemical reactions like this: an initial pulse initiates a reaction, while subsequent pulses probe the reaction steps as they play out. It's the speed of the pulses—which are as fast as a few quadrillionths of a second—that provide researchers a detailed record of even the shortest-lived reaction products, they said.

Through the combination of experiments, researchers learned that the conversion rate from ferrate to the highly reactive Fe(V) was about 15 percent, which is similar to the radical production of ozone purification systems that are more expensive to deploy.

Researchers also got some surprising information from their experiments related to the type of light needed to produce the more-reactive iron species, they said. They discovered that a range of light wavelengths—from ultraviolet spectra nearly into the visible—can produce  Fe(V).

There are two reasons this discovery in particular is important to advancing water purification using ferrate, researchers said. One is that visible light takes less energy to produce than ultraviolet light, which could make ferrate excitation more energy efficient than scientists previously believed.

The other is that visible light scatters less in cloudy water, which means Fe(V) can be produced in a variety of water conditions, expanding options for how systems can work, they added.

Researchers published a paper on their research in the Journal of the American Chemical Society.

Joseph Goodwill, an assistant professor of civil and environmental engineering at URI who leads a research program that aims to find more economical ways to develop water treatment facilities, said the research is promising. Ferrate-based purification systems are a good option for rural-based systems that don't have the resources that large urban systems do, and thus understanding better how ferrate works can promote their development, he said.

“The formation of powerful oxidants from ferrate has been difficult to understand mechanistically, and this has blocked process optimization and full-scale implementation in water treatment applications,” Goodwill said in a press statement. “The results presented in this paper improve our fundamental understanding of the ferrate system, which opens doors for applications.”