Individually, These Robots Are Dumb. But When They Work Together? Awesome! 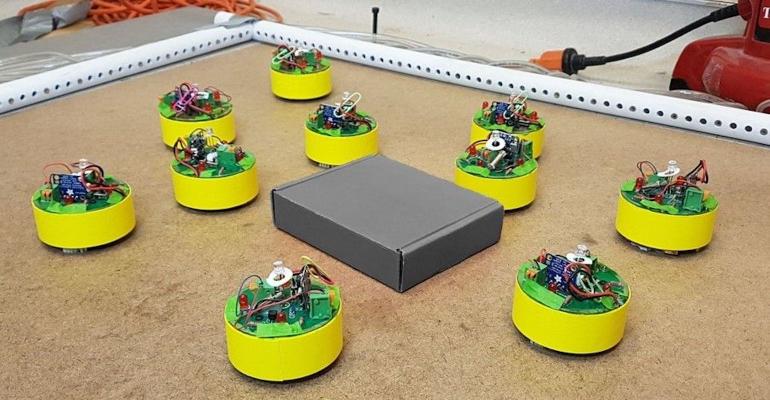 Researchers have demonstrated how swarms of low-cost robots without sophisticated programming can perform complex tasks if they work together. The findings could have broad implications for the facilitation of collective behavior in robotic systems in the future, they said.

A team from the Georgia Institute of Technology (Georgia Tech) developed a series of so-called “dumb robots”—basically mobile granular particles—without any sensors, communication, memory, or computation. Researchers dubbed them BOBbots—i.e., behaving, organizing, buzzing bots, or a nod to granular physics pioneer Bob Behringer—and then aimed to see what they could do based on physics principles rather than complex computing.

Related: Will Advanced Artificial Skin Raise Hope in Restoring a Sense of Touch?

Indeed, though robots are getting increasingly sophisticated and expensive, it’s still hard to get them to work together in swarms to perform a collective task, acknowledged Dana Randall, a professor of computing and physics at Georgia Tech, who led the research.

Taking a cue from ants—who can build structures, coordinate their physical systems to form magnets, or collectively change the structure at a certain temperature—the team aimed to see if they could get their robots to behave in a similar way.

“Our overarching goal is to understand what collective tasks can be accomplished with virtually no coordination or computation,” Dana Randall, a professor of computing and physics at Georgia Tech, told Design News. “We are looking to see if groups can be coordinated through minimal information and interaction.”

What they found is that it is possible to get the robots to accomplish a set of tasks by leveraging their physical characteristics, a trait that the team calls “task embodiment,” she said.

Most complex robots developed today use computer-based programming and instruction as the basis for their functionality. To get the BOBbots to function in a specific way, researchers took a more fundamental approach, Randall said.

Researchers were motivated by the structures and group dynamics that are seen in basic organisms and even particles, focusing in particular on studying group behaviors, such as collecting compactly, dispersing, and coordinating to remove impurities within the collective, she explained.

The team developed an experimental platform of BOBbots, which were designed with cylindrical chassis that have vibrating brushes underneath and loose magnets on their periphery. What researchers discovered was that as the bots moved and bumped into each other, compact aggregated groups formed that could collectively perform a task that one bot alone couldn’t achieve, Randall said.

In addition to proving their theory, the team also learned new things about the collective behavior of the bots through their observations that have larger implications for the robotics field, she told us.

“While magnets seem sensible for tasks like getting the robots to gather together, there is nothing that predicts that the ensemble will not only grow but will also compactify,” Randall explained to Design News. “This gave us precise predictions for the robots that we could measure and confirm.”

Researchers also found that by adding minimal sensing so that a robot could estimate the forces acting on it by other robots, they could improve the performance and get tighter, larger collections of robots working collectively, she said.  This could pave the way for a future pairing of physics and computation for robotic systems, she said.

“We are trying to develop a hybrid model of computation that restricts certain moves allowed in theory and adding behaviors that are available in practice,” Randall told us. “This two-pronged approach will give insights into collectives, whether swarms of robots, granular materials, and colloids which are nanoparticles at a significantly smaller scale.”