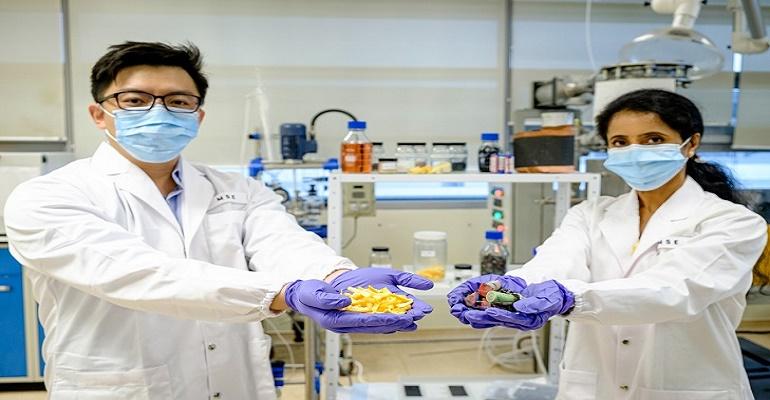 Most people don’t think about the peels of an orange as a scientific tool; however, this is exactly what researchers in Singapore have used to transform old batteries into new ones.

The method is aimed not only at recycling food waste but also about saving some of the 50 million tons of e-waste—or waste from electronic devices—generated globally each year.

In Singapore, which is a resource-scarce country, extracting valuable metals from all kinds of discarded electronics becomes very important to creating a circular economy, said Assistant Professor Dalton Tay of the NTU School of Materials Science and Engineering and School of Biological Sciences, who led the research.

“With this method, we not only tackle the problem of resource depletion by keeping these precious metals in use as much as possible but also the problem of e-waste and food waste accumulation—both a growing global crisis,” he said in a press statement.

Currently, spent batteries are typically broken down into waste and their precious metals removed by treating them with extreme heat to smelt the metals, which emit toxic gases.

There are other approaches as well, but these are also harmful to the environment. They involve using strong acid solutions or weaker acid solutions with hydrogen peroxide to extract the metals, which produce pollutants or rely on hazardous chemicals.

The solution the NTU team came up with is much more efficient and much less impactful on the environment, Tay said. Researchers discovered that by using an oven-dried orange peel that’s ground into powder and then combined with citric acid—which is found in citrus fruits—they can break down the metals in batteries in a more environmentally friendly way, he said.

Using their approach, the team could successfully extract about 90 percent of cobalt, lithium, nickel, and manganese from spent lithium-ion batteries, a rate that’s comparable with using hydrogen peroxide.

“The key lies in the cellulose found in orange peel, which is converted into sugars under heat during the extraction process,” Tay explained in a press statement. “These sugars enhance the recovery of metals from battery waste. Naturally-occurring antioxidants found in orange peel, such as flavonoids and phenolic acids, could have contributed to this enhancement as well.”

From Old to New

Once researchers recovered the materials, they then built new lithium-ion batteries, which had a similar charge capacity to devices found on the commercial market. This suggests that this new technology is feasible to be used for recycling old batteries and reselling new ones made from the materials.

Researchers published a paper on their work in the journal Environmental Science & Technology.

The team is now looking to further improve the performance of their batteries generated from treated battery waste.  One of the ways they aim to do this is to optimize the charge-discharge cycling performance of the batteries made from recycled materials so they are completely on par with new devices.

The team also aims to improve the conditions to allow for a scale-up in production and as well as exploring ways to make the process even more eco-friendly, such as removing the use of acids in the process.