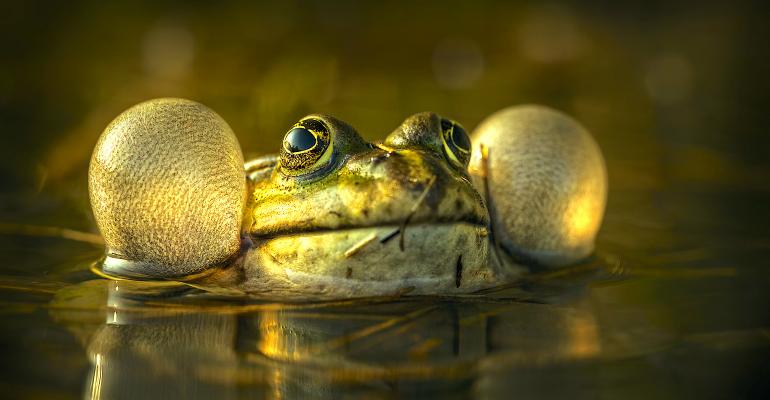 Researchers at the University of Pittsburgh developed materials that can dynamically organize themselves similarly to how some creatures create swarms.

Inspired by the swarm habits of certain animals, researchers have developed a system of self-oscillating flexible materials that can dynamically organize themselves that they said can be used to design future robotic systems.

A team from the University of Pittsburgh’s (Pitt’s) Swanson School of Engineering studied Japanese tree frogs in their research, which fall under the category of “swarmalators,” or entities that coordinate both their spatial movements and inherent time clocks when moving into a swarm formation, researchers said.

Specifically, each frog changes both its location and rate of croaking relative to all the other frogs in a group. This is different than the behavior of some other swarming creatures, such as birds or fish, which only coordinate their location relative to the others to create one, coherent unit. Others, like fireflies, are different, coordinating their temporal behavior—the flashing on and off their lights—to form a swarm.

Tree frogs not only leverage both characteristics in their swarming, but they also change shape when they croak, which anyone who has ever seen a frog would know. This coordinated behavior also plays a role in their swarm habits.

Related: 3D Printing Process Creates Objects Made of Both Liquid and Solid Materials

Inspired by this, researchers developed component materials that can mutually adapt their overall shapes as they interact in a fluid-filled chamber to dynamically self-assemble, they said.

Until now, there have been very few material systems in which the individual units of the system can simultaneously synchronize their spatial assembly, temporal oscillations, and morphological changes, said Anna C. Balazs, a distinguished professor of chemical and petroleum engineering and John A. Swanson Chair of Engineering at Pitt who led the work.

Systems that work in this way can inform the development of collaborative, self-regulating robotic systems that can come together in a similarly synchronized way to perform their assigned functions in a repeated way, she said.

To create the materials, researchers used computer models to first design micron and millimeter-sized flexible sheets in solution that can respond to a non-periodic input of chemical reactants. The solution does this by spontaneously undergoing oscillatory changes in location, motion, and shape, Balazs said.

She used the example of an initially flat, single sheet that can morph into a three-dimensional shape “resembling an undulating fish tail, which simultaneously oscillates back and forth across the microchamber,” Balazs said in a press statement. What powers the self-oscillations of the flexible sheets are catalytic reactions in a fluidic chamber, researchers said. 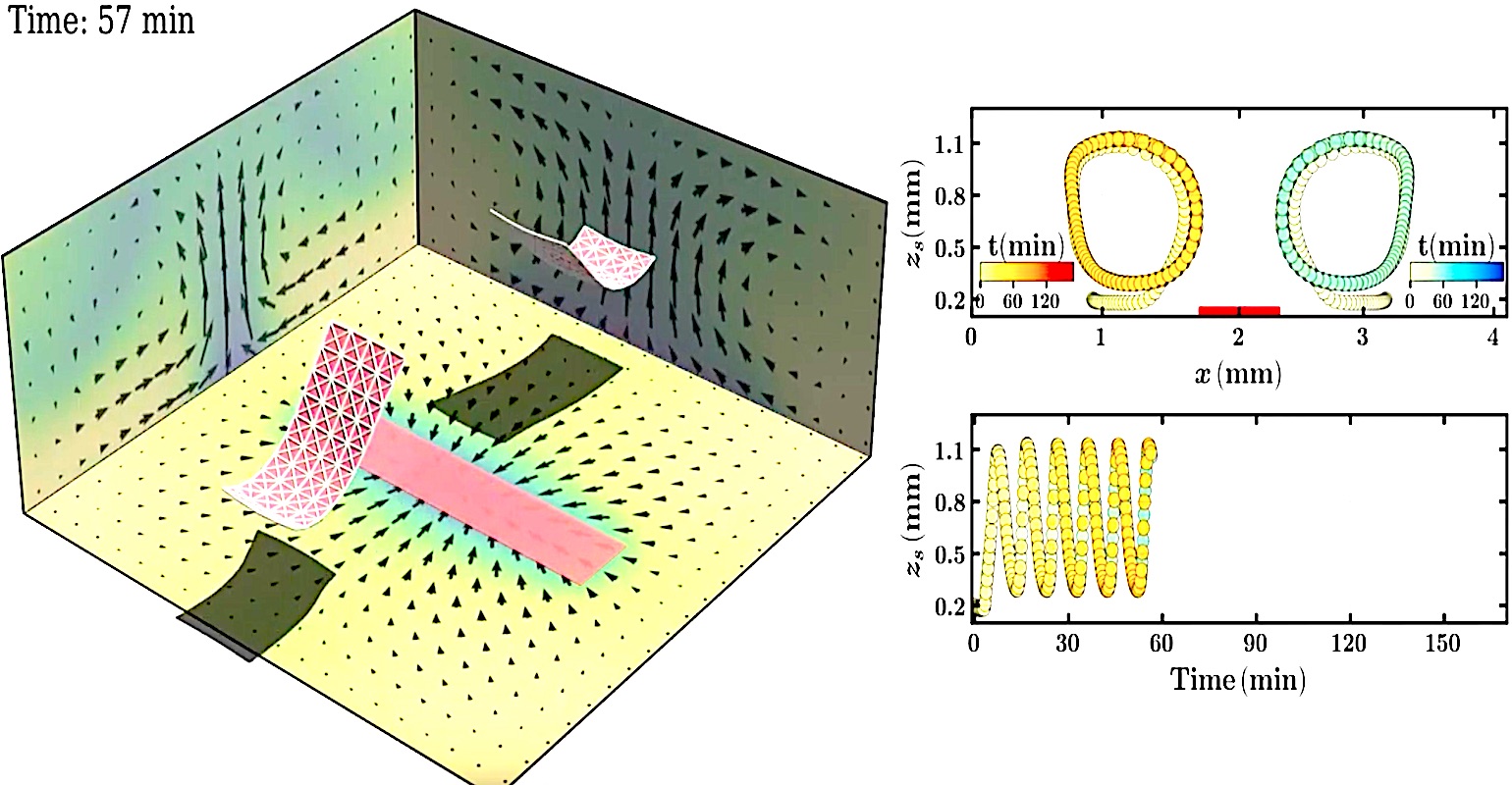 A passive sheet of self-assembling materials developed by researchers at the University of Pittsburgh can perform self-oscillations. The center of the sheet oscillates back and forth across the catalytic patch (red).

It works like this: reactions on the surfaces of the sheet and chamber initiate a complex feedback loop that converts chemical energy into fluid flow, they said. This transports and deforms the flexible sheets, which due to their evolving structure affect the motion of the fluid. This, in turn, continues to deform the sheets, researchers explained.

“Complex dynamic behavior is a critical feature of biological systems,” Oleg E. Shklyaev, a post-doctoral associate who also worked on the research, explained in a press statement. “Stuff does not just come together and stop moving. Analogously, these sheets assemble in the proper time and space to form a larger, composite dynamic system. Moreover, this structure is self-regulating and can perform functions that a single sheet alone cannot carry out.”

Researchers published a paper on their work in the journal Proceedings of the National Academy of Sciences (PNAS).

The team describes what they said is an even more curious phenomenon when they introduce a second sheet into the system—forms of self-organization between vibrating structures, they said.

“For two or more sheets, the collective temporal oscillations and spatial behavior can be controlled by varying the size of the different sheets or the pattern of catalyst coating on the sheet,” Balazs explained in a press statement. These variations permit control over the relative phase of the oscillations, e.g., the oscillators can move in-phase or anti-phase, she said.

Overall, Balazs said the researchers’ results are “exciting” because they could “eventually lead to forms of bio-inspired computation – just as coupled oscillators are used to transmit information in electronics – but with self-sustained, self-regulating behavior.”