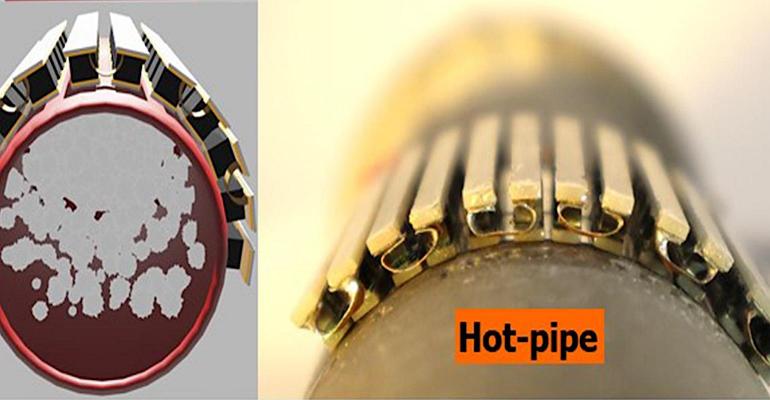 The heat that emanates from electronic devices, household appliances, and hot water and exhaust pipes, called wasted heat, is a large untapped source of energy that scientists have been trying to harness for years.

A group of collaborators from Penn State and the National Renewable Energy Laboratory now have found a new way to do this on a large scale with the invention of a thermoelectric generator that can wrap around hot surfaces and convert wasted heat into electricity.

The Penn State team already had created rigid thermoelectric devices that showed more efficiency to harvest wasted heat and generate electricity than commercial devices available to do the same. When placed near a heat source, these devices convert differences in temperature to electricity, moving electrons from the hot side to the cold side to produce an electric current.

Their most recent work is an evolution of this device that adds the benefit of flexibility as well as offering higher output and efficiency, said Shashank Priya, associate vice president for research and professor of materials science and engineering at Penn State, who led the project.

“A large amount of heat from the energy we consume is essentially being thrown away, often dispersed right into the atmosphere,” he said in a press statement. “We haven’t had cost-effective ways with conformal shapes to trap and convert that heat to useable energy. This research opens that door.”

Given its flexibility, the new device offers opportunities to derive more energy from the most attractive wasted-heat options, such as pipes in industrial and residential buildings and on vehicles, researchers said.

In these cases, devices can be placed directly on the heat source to generate electricity, thus acting in the most efficient way possible, noted Wenjie Li, assistant research professor at Penn State who also worked on the project.

“This could have a significant impact on the development of practical thermal to electrical generators,” he said in a press statement.

The devices themselves are comprised of small couples, or components that transfer energy, each of which looks like a table with two legs.  In typical devices, many of these two-leg couples are connected together, which typically form a flat, square device.

For the new, flexible device, researchers placed six couples along a thin strip and then  used flexible metal foil to connect 12 of the strips together. This creates a device with 72 couples, each layer bound to the other with liquid metal to improve its performance, they said.

Typically scaling up a thermoelectric device will result in a loss of power density, which is what has made it challenging to fabricate large-scale thermoelectric generators, noted Bed Poudel, an associate research professor at Penn State, in a press statement.

However, the design of the device and use of liquid metal between the layers of couples managed to not only maintain its efficiency but even bolster it, he said.

Indeed, the gaps between the strips enable flexibility so that the device can fit around shapes like pipes, researchers said. These gaps also allow for flexibility in altering the fill factor, or the ratio between the area of thermoelectric material and the area of the device, they said. Scientists can use this factor to optimize thermoelectric devices for different heat sources, researchers said.

Researchers conducted tests on a gas flue, finding that the new device exhibited 150 percent higher power density than other state-of-the-art units, they reported. Meanwhile, the scaled-up version—a bit larger than 3-inches squared--maintained a 115 percent power-density advantage. This version exhibited a total power output of 56.6 watts when placed on the hot surface, researchers said.

“Think about an industrial power plant with pipes hundreds of feet long,” he said in a press statement. “If you can wrap these devices around an area that large, you could generate kilowatts of energy from wasted heat that’s normally just being thrown away. You could convert discarded heat into something useful.”