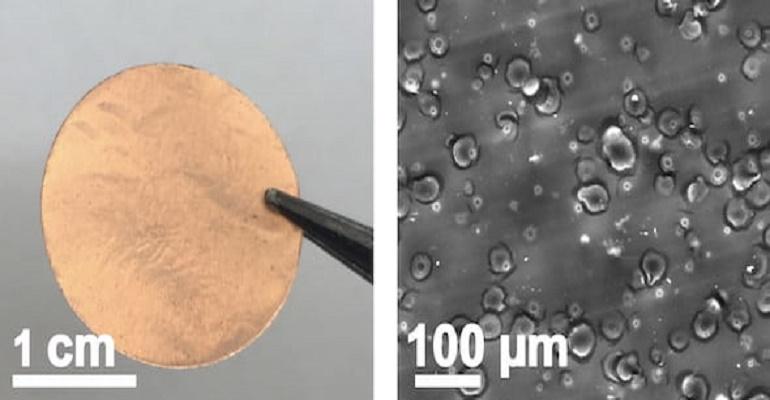 Scientists are leveraging something that people use all the time to hold bandages together to improve next-generation battery technology.

Researchers at Rice University have turned adhesive tape into a silicon-oxide film that can be used in anodes in lithium-metal batteries to make them safer and avoid degradation typical to current designs, they said.

A team led by Rice chemist and professor James Tour used techniques similar to those utilized to develop laser-induced graphene to create a porous silicon-oxide coating mixed with a small amount of graphene from the tape’s polyimide backing.

Researchers used this to create an oxide layer that forms directly on the current collector of the battery. The layer works as an anode, which is typically made of graphite in lithium-ion designs.

To form the layer, researchers stuck the tape to a copper current collector and used a laser on it multiple times to rapidly raise its temperature to 2,300 Kelvin, or 3,680 degrees Fahrenheit. This process generated a porous coating composed primarily of silicon and oxygen, as well as a small amount of carbon in the form of graphene.

In tests, the film appeared to soak up and release lithium metal without allowing the formation of dendrites, or needle-like structures, that can lead to catastrophic battery failure and even potentially causes fire.

In a lithium-metal battery, the lithium metal tends to degrade fast during the battery’s charge and discharge cycles with the bare current collector. However, using the laser-induced silicon oxide (LI-SiO), this degradation didn’t happen, said Weiyin Chen, a Rice graduate student who worked on the research.

“In traditional lithium-ion batteries, lithium ions are intercalated into a graphite structure upon charging and de-intercalate as the battery discharges,” he said in a press statement. “Six carbon atoms are used to store one lithium atom when the full capacity of graphite is used.”

But because no graphite is used in a lithium-metal anode, the lithium ions directly shuttle from the surface of the metal anode as the battery discharges, Chen said.

“Lithium metal-anodes are considered a key technology for future battery development once their safety and performance issues are solved,” he said.

Some of these issues include the main drawback of using the LI-SiO film in the lithium-metal anode structure, which is that they have a short life span.

However, researchers said the pros outweigh the cons. The new “anode-free” design is lighter and delivers better performance, characteristics that are well-suited to batteries for applications with demands for energy-storage devices that are lightweight but still deliver on energy needs.

Tour said he thinks the invention could make lithium-metal batteries suitable as high-performance batteries for outdoor expeditions or high-capacity storage for short-term outages in rural areas.

Production of the anode-free battery also should scale and can be done rapidly, without solvents, and in-room atmosphere and temperature, Tour said. Using standard industrial lasers should allow industry to scale up for large-area production. The technique also has the potential to produce films to support metal nanoparticles, protective coatings, and filters, he added.