3D Printed Aerogels Proven for Small-Scale Use in Microelectronics 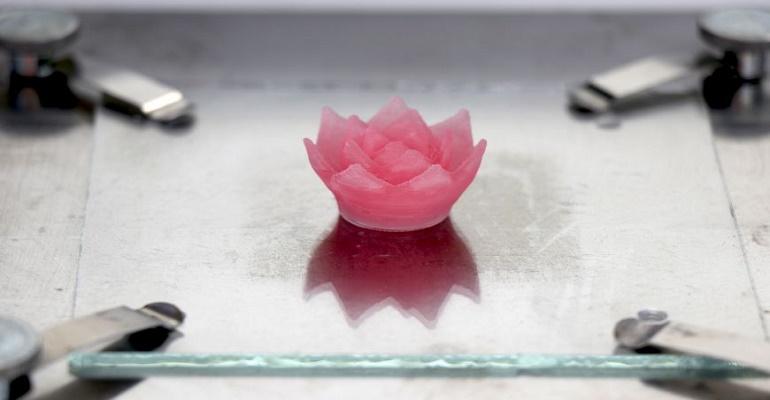 To demonstrate that fine aerogel structures can be produced in 3D printing, researchers from the Swiss Federal Laboratories for Materials Science and Technology (Empa) printed a lotus flower made of aerogel.
Researchers develop a new method to 3D print the thermal insulating materials for precision engineering.

Aerogel materials are known to scientists for being effective thermal insulators that could be useful in electronics, but so far have been limited to large-scale applications, such as those in environmental technology or industrial catalysis.

A team at the Swiss Federal Laboratories for Materials Science and Technology (Empa)—comprised of scientists Shanyu Zhao, Gilberto Siqueira, Wim Malfait, and Matthias Koebel—worked specifically with silica aerogels in their research, using 3D printing to create stable microstructures from the light, porous foams.

While previously, additive manufacturing was not considered “feasible” for aerogels, the Empa team has demonstrated “a direct ink writing protocol to create miniaturized silica aerogel objects” from a novel combination of materials, researchers wrote in a paper published in a recent issue of the journal Nature.

Aerogels are characteristically brittle, and typically must be reinforced with fibers or with organic or biopolymers for large-scale applications. In the past, scientists have found it difficult to saw or mill small pieces out of a larger aerogel block because of this aspect of the material.

This brittle behavior also made it difficult for researchers to directly solidify the gel in miniaturized molds, which would result in a high rate of error and waste when using this technique, they said. Both of these material roadblocks prevented scientists from using aerogels for small-scale applications.

Now the Empa team has produced stable printed aerogel structures that can be as thin as a tenth of a millimeter, researchers said. The key to their success is in the silica ink they used to print the materials, for which scientists can precisely adjust the flow and solidification properties to print both self-supporting structures and wafer-thin membranes.

“The inks exhibit shear-thinning behavior, owing to the high volume fraction of gel particles,” the team wrote in the paper. “As a result, they flow easily through the nozzle during printing, but their viscosity increases rapidly after printing, ensuring that the printed objects retain their shape. “

After printing, researchers used an ammonia atmosphere to gel the silica for subsequent processing into aerogels. The resulting aerogel objects are comprised of pure silica and can retain the high specific surface area of 751 square meters per gram and ultralow thermal conductivity of 15.9 milliwatts per meter per Kelvin—characteristics that are typical of silica aerogels, researchers wrote.

At the same time, the resulting materials have strong mechanical properties and can even be drilled and milled, which wasn’t possible before with this type of material, they reported.

The work proves that researchers can now thermally insulate even the smallest electronic components—such as a voltage controller on a motherboard—from each other using hydrogels, according to researchers. The method and material also can be used to shield heat sources inside medical implants to protect the human tissue with which they come in contact.

Researchers plan to continue their work on the materials and are currently seeking industrial partners to integrate 3D printed aerogel structures into high-tech applications, they said.