3D Print Your Own Sith Lightsaber for Halloween

A make-your-own Star Wars Sith Lightsaber hilt is heftier and better-looking than most others out there, according to its maker, Sean Charlesworth. You can 3D print it from free source files, and there's even a hardware kit available -- not free -- so you can build one just in time for Halloween.

A new design for a DIY Star Wars Sith Lightsaber hilt is heftier and better-looking than most others out there, according to its maker, Sean Charlesworth. You can 3D print it from free source files, and there's even a hardware kit available -- not free -- so you can build one just in time for Halloween.

The 3D-printed Cutaway Sith Lightsaber hilt has parts inspired by multiple objects, as Charlesworth explains in the video above. Besides doing his own maker thing, he works at Tested.com, founded by ex-Mythbuster Adam Savage, where you can find out how 3D printing is used in lots of movie props. Although he designed the hilt as a kit, he's not currently selling either kits or fully built lightsabers. 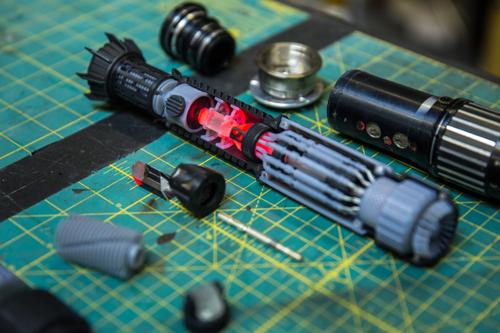 Some of the parts that inspired components in Sean Charlesworth's 3D-printed Cutaway Sith Lightsaber hilt.

In the video, Charlesworth discusses how he came up with this design. He says he wanted to build a lightsaber hilt that was bulkier, more attractive, and more realistic, with finer detail. He modeled some of its components after old camera parts, since he used to repair cameras and has lot of these parts lying around. The hilt is designed as a cutaway to show its internal construction. Parts inside of it light up, although he kept electronics to a minimum so there aren't any sound effects.

Charlesworth used the Form 2 desktop SLA (stereolithography) 3D printer and some new, updated resins from Formlabs. These included an updated black that's more intense in color and shows details better than the previous formulation, as well as a clear resin that's both clearer and resists yellowing better. Also, the reformulated flex material is now dark gray instead of clear. With a hardness Charlesworth says is similar to that of a boot heel, it was perfect for the handgrips on the hilt.

You can download the files here free from Pinshape.com. Charlesworth is also selling a limited number of hardware kits for the cutaway lightsaber on Etsy. In this second video, which runs just over half an hour, he shows you in detail how to assemble the parts once you've 3D printed them. Some assembly is done with magnets, while other parts are glued together. He also notes that, although the lightsaber was originally designed to print on SLA resin printers, it's been successfully printed on FDM machines, although he can't guarantee proper fit of parts made using FDM.