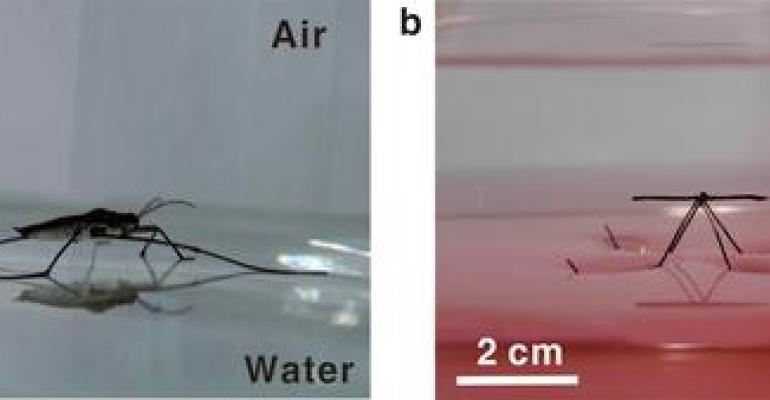 Biomimicry is often used as inspiration for new materials and new methods of constructing materials. Now Chinese researchers have created a substance that can repel oil underwater by taking inspiration from water strider insects.

Most oil-repelling substances don't work underwater, or even if they just get wet. Developing such materials would be a boon to helping aquatic robots move through water to handle oil and clean up oil spills. It could also be used as a coating to prevent a car's windshield from getting gummed up with dirt and bugs, or as a coating on ship hulls to prevent the growth of barnacles and other sea creatures.

Water-strider insects, which look like big mosquitos, can skate between the surfaces of air and water without sinking because of the chemistry and physics of microprojections on their legs that are lined with nanogrooves. Led by Shutao Wang, of the Chinese Academy of Sciences, researchers have constructed a device that can float between the surfaces of oil and water in a parallel way, without either sinking or getting oily. The 5-cm-long "oil strider" device works like the bug because of the combination of its construction with a super-oleophobic coating on the device's four metal legs that repels oil even underwater.

The researchers made the bug-like device out of copper wires bent into lengths approximating the lengths of the insect's legs. The legs were tied to a copper plate mimicking the insect's body. A rough nanoscale coating that resembles the texture of the insect's legs was created by immersing the wires in aqueous ammonia. This substance reacted with the copper to produce microclusters of copper oxide.

The combination of the legs' oil-repelling, roughened surface and the super-oleophobic coatings' hydrophilic chemical components created a super-oleophobic force at the interface between oil and water. The researchers found that this force consisted of buoyancy force, curvature force, and deformation force.

To test the wires' ability to repel oil, Wang's team placed them in a container of water and added droplets of the oil 1,2-dichloroethane. When the researchers agitated the container, the strider device skated on the surface between oil and water. To measure the interaction between a drop of liquid and the surface of the device's legs, the researchers measured their angle of contact. The closer the angle is to 180 degrees, the more a drop of oil has beaded up into a shape resembling a perfect sphere. A material is considered super-oleophobic when its contact angle is above 150 degrees. The contact angle between the device's wire leg and an underwater droplet of oil was about 164 degrees.

Wang said the coating method the team has developed could work with metals besides copper, as well as with polymers that are coated with a metal oxide. Somewhat larger, lightweight devices could also be built.