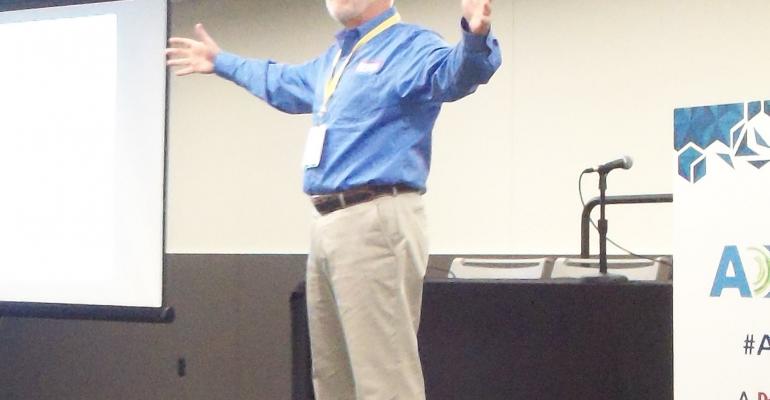 A straight substitution of aluminum for steel won’t work. Automotive engineers need to be ready to redesign their components.

Automakers will use more aluminum components in future vehicles, but they’ll need to design those new parts from a clean slate, rather than doing one-for-one replacements of steel, an expert told attendees at the recent Advanced Design & Manufacturing conference in Cleveland.

“We’ve already picked all the low-hanging fruit, as far as substituting aluminum for steel,” noted Henry Bertolini, technical manager for Pennex Aluminum Co. “Now we have to do the hard job of designing from scratch.”

During a technical session titled Aluminum-Based Architectures & Conversions Enabling Lightweight Objectives, Bertolini predicted that passenger cars will need to save between 175 and 750 lbs per vehicle by 2030, and light trucks will need as much as 850 lbs of savings, making aluminum a virtual necessity. For that reason, he said, use of aluminum in vehicles has already risen sharply. Aluminum hoods, for example, jumped from 22% usage in 2009 to 48% in 2015. Similarly, use of aluminum in sub-frames and engine cradles tripled during those years, going from about 3% to 9%.

Still, many parts remain to be changed, and most of those will require a clean-sheet design, he said. Cross-car beams, shock towers, roof rails, door beams, bumper beams, control arms, housings, A- and B-pillars and numerous other parts will migrate from mild steels to aluminum over the next decade, requiring engineers to adopt new shapes and fasteners, as well as new manufacturing and assembly techniques.

Bertolini stressed that one-for-one replacement – converting a steel part to an identical aluminum component – is a poor strategy. He cited an example of an automaker that tried to build an aluminum chassis for a high-performance, low-volume automobile without redesigning it.

“They called us up and said, ‘Something’s wrong,’” he recalled. “All they had done was convert the steel parts to aluminum, and it was too heavy and too expensive. We told them, ‘You have to start over and design for aluminum.’”

The keys to success are difficult but worthwhile, he said. Engineers need to reduce component counts, combining parts by employing aluminum extrusions to create complex shapes. They have to use new assembly techniques by incorporating numerous adhesives and different kinds of fasteners. Moreover, traditional spot welding should only be used when absolutely necessary, he said.

He cited examples of successful redesigns, including an all-aluminum frame on a Cadillac CT6 and a sunroof on an unnamed vehicle. The Cadillac frame used a high-pressure aluminum die casting to replace as many as 20 separate parts in one case. And the sunroof used six parts – two extrusions and four small aluminum stampings – to replace a 28-piece steel mechanism.

Bertolini emphasized that auto engineers need to be ready to change. “People ask, ‘How do we fit this in our existing manufacturing process?’” he said. “And the answer is, you don’t. They ask, ‘Will our assembly process be the same?’ And the answer is, it won’t.”

The key to a successful change is the engineer’s mindset, he said. Engineers need to educate themselves in the basics of the technology and understand what can and can’t be done with aluminum. “Be ready to reduce the part count and take advantage of everything that aluminum gives you,” Bertolini said.

As government agencies continue to push for an average industry fuel economy of 54.5 mpg by 2025, such measures will become increasingly important, he added. “We don’t know what future cars will look like,” Bertolini said. “But we are absolutely certain that aluminum will play a big role in them.”