Use of Metallic Glass Simplifies 3D Printing of Metals 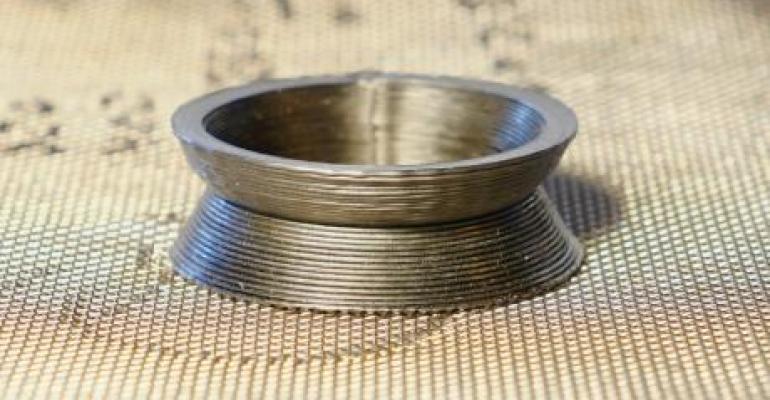 A 3D-printing process using metallic glass could allow thermoplastics to be replaced in some industries.

Researchers at Yale, MIT, and Desktop Metal have teamed up to simplify metal 3D printing, expanding its potential for use in industrial applications and the range of objects that can be printed using the process. The research, led by Jan Schroers, Yale professor of mechanical engineering and materials science, has taken a new approach to 3D-print objects from metallic glass—a relatively new material stronger than even some of the strongest metals, but with the pliability of plastic.

Through their work, the team developed a process that can use metallic filaments made from metallic glass into objects, greatly simplifying metal 3D printing. Until now, metal 3D printing has had limitations due to the complexity of working with the material. The key challenge is that metals generally don’t exist in a state that allows them to be readily extruded, Schroers said in a Yale news release.

Using what are called bulk metallic glasses (BMGs), however, is a different story. These materials can be softened continuously upon heating—something also found with thermoplastics, but not conventional metals. "We have shown theoretically in this work that we can use a range of other bulk metallic glasses and are working on making the process more practical and commercially usable to make 3D printing of metals as easy and practical as the 3D printing of thermoplastics," he said in the news release.

Specifically, the team demonstrated that BMGs can be used in 3D printing to generate solid, high-strength metal components under ambient conditions similar to those in thermoplastic 3D printing. Researchers published a paper on their work in the journal Materials Today.

In their work, the team used readily available BMG material made from zirconium, titanium, copper, nickel, and beryllium in amorphous rods of 1 mm diameter and 700 mm in length. The process they developed uses an extrusion temperature of 460 degrees Celsius and an extrusion force of 10 to 1000 Newtons to force the softened fibers through a 0.5 mm diameter nozzle.

“It was even surprising to us how practical this process is once we had the processing conditions figured out,” Schroers said. Usually, metal 3D printing is done using powdered metals that are heated into solids. However, this process is complex and expensive. And even when achieved, it doesn’t always result in the desired objects or components.

BMGs have unique atomic structures that give them their properties and allow them to behave differently than traditional metals. When metallic glasses cool from a liquid to a solid, their atoms settle into a random arrangement rather than crystallizing, which is what metals typically do.

Using this characteristic of BMGs, printing with these materials could eliminate compromises that companies have made in choosing thermoplastic components over metal components, paving the way for new uses in industries such as aerospace, aviation, and engineering, researchers said. However, some challenges still must be overcome to make BMG more viable for printing on a broader scale, Schroers said. These include the availability of practical BMG feedstock and more reliability and consistency in the layer-to-layer bonding of fused filament fabrication, he said.