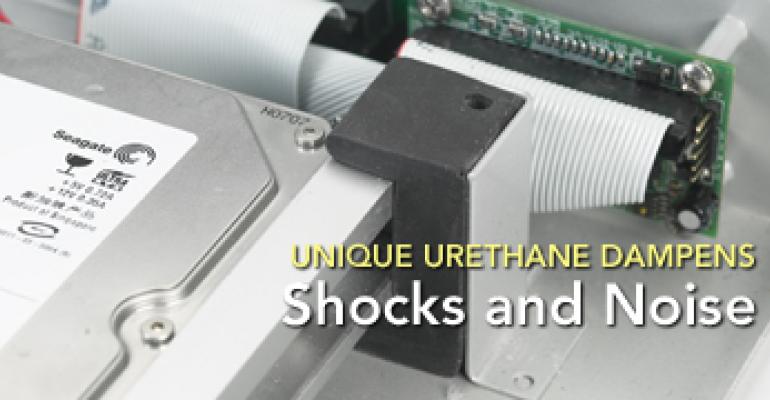 A proprietary visco-elastic polyurethane offers design engineers unique opportunities to dampen vibrations and noise in mechanical systems. Sorobothane is a thermoset, polyether-based polyurethane solid that flows like a liquid under load while retaining excellent memory.

The result is a unique system to absorb and deflect shock.

"Industrially we look for applications requiring shock and vibration isolation," says Bob Boyd, an owner and former president of Sorbothane. "We're all over the map. Stereo people use it for isolators on turntables for high-end players. We have isolated disc drives in laptop computers. We are still in the Wilson baseball glove and we do a lot of medical applications." Shipping problems on medical scanners dropped from as high as 12 percent to less than one percent after using Sorbothane as part of the shipping material.

Sorbothane was invented by Dr. Maurice Hiles in England with funding from the British National Research Development Corp., which subsequently formed B.T.R. Development Services to commercialize the technology. In 1982 Sorbothane, Inc. was formed to take over the Sorbothane business in the U.S. Other independent companies sold products made from the same technology in the United Kingdom and Japan.

Dr. Hiles received the John W. Hyatt Award in 1992 from the Society of Plastics Engineers. The award is given annually for benefit to society. His research into the energy dissipation properties of human soft tissue disclosed a structure very similar to an interpenetrating polymer network. This led to his synthesis of the first commercial simultaneous interpenetrating network, now called Sorbothane. Original use focused on shoe inserts.

Dr. Hiles was professor of biomaterials science at the University of Akron from 1980 to 1983 and holds eleven U.S. patents, primarily covering energy-absorbing compositions.

In one of his early patents, Dr. Hiles said his polymer production method comprises reacting a slightly branched polyol of low molecular weight with a relatively small amount of an isocyanate. He said the elastomer should be stable at temperatures of from -40C to +100C â€“ which in fact remains one of Sorbothane's strongest competitive advantages.

"Say someone in Phoenix has a laptop and it hits the ground. And then the same thing happens in Minnesota in the dead of winter. Sorbothane has the advantage of a larger window of performance than other materials," says Boyd.

Most urethanes are created by reacting equal amounts of polyol and isocyanate. The balance is tipped ten to one in favor of the polyol to produce Sorbothane. As a result, the polymer has a minimum of chain branching. "The resulting solid polymer behaves like a quasi-liquid, being readily deformed by an applied force and slow to recover, although in the absence of such a force it takes up a defined shape and volume," Hiles said in his patent.

Curiously, Hiles proposed the material for automotive bumpers. That goal was never achieved, although Hiles was correct that metal bumpers were going to be replaced with polymers. Less expensive thermoplastic olefins filled the role in part because they could be mass produced with injection molding machinery.

The Sorbothane urethanes are cast, a time-consuming batch process. Sorbothane primarily uses book molds, a closed casting process.  Skilled mold design is required to avoid air entrapment.  In an interesting twist, a two-pour system is sometimes employed. In one stream, a rigid polyurethane is metered into a mold, followed by a stream of Sorbothane. The two layers are chemically bonded as they react together in the mold.

In another construction, called "constrained," a layer of Sorbothane is bolted between pieces of steel, producing a solid, vibration-damping base for machinery.

There a few key parameters engineers need to consider when designing with Sorbothane.

"We want to know the weight, the frequency and the temperature (in the proposed application) so we can tailor the material and put a sufficient amount of material under the base so you are carrying the load and won't get creep," says Boyd. "And then we can tailor the hardness so that you get the maximum performance."

The polyol formulation is a constant, but the amount of isocyanate can be varied to produce Sorbothanes with different levels of hardness.

Engineers may be surprised to learn that the hardness of Sorbothane is measured in the Shore "00" scale.

"If you take a hard rubber, it's generally measured on the D scale," says Boyd. "Soft vinyls measure on the A scale. A low durometer on the A scale would be 30. A high durometer for Sorbothane on the 00 sale would be 70. That 30 and 70 equate. So our hardest version tends to be the softest version of what most people would make on the A scale. We're down there with foams, but we are not a foam. We are a solid material. We have no cell structure."

For obvious reasons, Sorbothane is a specialized business, and operates with annual sales under $10 million. One strength is its diversity of markets and applications.

One interesting new application is a top covering for rails used to transport performers in the new Cirque du Soleil in Macau. Sorbothane keeps noise to a minimum.
0 comments
Hide comments
Related