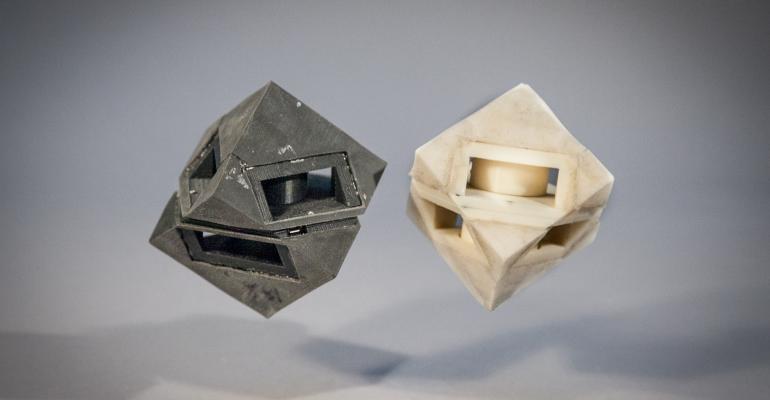 Researchers at two leading robotics research labs have come up with different approaches to skin materials for robots. Both may be usable in medical or orthopedic and prosthetic applications.

Researchers at two leading robotics research labs have come up with different approaches to skin materials for robots. Both of these technologies from MIT's Computer Science and Artificial Intelligence Laboratory (CSAIL) and Georgia Tech's Healthcare Robotics Lab may be usable in medical or orthopedic and prosthetic applications.

CSAIL researchers have developed a programmable viscoelastic material (PVM), plus a method of fabrication, that could be used as shock-absorbing skins to help make robots safer, tougher, and nimbler. For anyone who's seen BattleBots in action, that need is a no-brainer: robots are often more fragile than they look, and usually don't have much in the way of padding for protection. This can lead to some spectacular (and sometimes messy) wipeouts.

Members of these two BattleBot teams presented their designs at the Design & Manufacturing Minneapolis show last September. They also gave tips about designing both rugged robots and medical devices, which have some challenges in common. (Source: Naomi Price/UBM)

The new material contrasts with regular viscoelastics that have both solid and liquid qualities but are time-consuming to customize using existing fabrication methods, team leader Daniela Rus, who is CSAIL's director, told Design News. The team's new method includes 3D printing standard materials with a non-curing liquid, using a multimaterial printer to carefully control material characteristics. The researchers used an Objet multimaterial printer because that's what they happened to have in the lab. "But this process is not specific to those machines: any of the drop-on-demand 3D printers could be used," she said. This form of inkjet printer is commonly used in micro- and bio-fabrication for rapid prototyping.

PVM is based on a previous project called "printed hydraulics," said Robert MacCurdy, a postdoc in CSAIL's Distributed Robotics Lab, and lead author in its recent paper describing PVM. In October, the team presented this paper at the IEEE/RSJ International Conference on Intelligent Robots and Systems in Korea. It was co-authored by Rus and two other postdocs: Jeffrey Lipton and Shuguang Li.

"The key enabling idea behind both of these efforts, from a fabrication perspective, is the discovery that it's possible to print with both solidifying and non-solidifying materials simultaneously," said MacCurdy. "This capability makes it possible, in the case of printed hydraulics, to design very complex hydraulically-actuated assemblies and fabricate them automatically, that is, assembly-free fabrication."

The PVM technique lets users program every single part of a 3D-printed object to the exact levels of stiffness and elasticity they need, depending on the task they need it to perform. This gives design engineers much more control in realizing specific mechanical properties, and it's also a more streamlined manufacturing process.

Traditionally, if you want a piece of viscoelastic material, also known as rubber, you have to know ahead of time what the material's composition will be and mix together or mold the rubber into the desired shape. That piece has the same mechanical properties throughout the entire material. "You might need to make several parts separately and join them together," said MacCurdy. "This approach allows software to define what the mechanical properties are -- such as vibration absorption, stiffness, damping -- and directly realize those using 3D printing."

The previous work on printed hydraulics was the first example of using a non-solidifying liquid as a building material in a 3D printing context, said MacCurdy. The new PVM approach also uses this, but it mixes liquid and solidifying material more finely, creating what's in effect a new material.

MIT researchers outfitted their cube robot with shock-absorbing skins (left) that transfer less than half of the energy normally transferred to the ground. This allows the robot to land more precisely and therefore more safely. (Source: Jason Dorfman/MIT CSAIL)

In a comparison of two robotic cubes that move around by bouncing, one made with traditional viscoelastics and one made with a skin of 3D-printed PVM, the PVM-covered cube land nearly four times more precisely. You can watch a video of that comparison here. More precise landing is also safer, making it less likely to be damaged by a sensor cracking when it hits the floor, or by a rotor breaking off, said Rus. The material's motion-damping ability also makes the robots easier to control.

The team was able to change the elasticity of collisions by varying the concentration of liquid in each cube: more liquid produces more bounce. Each cube robot includes a rigid body, two motors, a microcontroller, a battery, and inertial measurement unit sensors. Four layers of looped metal strip are the springs that propel the cube.

The method, and the materials, could also be used to protect, and improve the durability, of other things like phones, as well as shock-absorbing running shoes and headgear. "We are very excited about the possibility of  making exoskeletons with different patches of hard and of flexible materials," said Rus. "For example, a long glove that gives the arm support, with flexible parts around the joints, could remove tremors from the hand."

"Being able to program different regions of an object has important implications for things like helmets," says MacCurdy. "You could have certain parts made of materials that are comfortable for your head to rest on, and other shock-absorbing materials for the sections that are most likely to be impacted in a collision."

A completely different idea comes from Georgia Tech's Healthcare Robotics Lab. Like many robotic touch sensors, those in the team's multimodal fabric-based tactile sensing skin include force sensors. But the skin also has actively heated temperature sensors to measure heat transfer, plus passive, unheated temperature sensors. This combination of force sensing with active thermal sensing could help robots do a better, and safer, job of interacting with people.

"With force, some part of the robot, like an arm or hand, makes contact with the robot's environment," team leader Charles Kemp, associate professor of biomedical engineering, told Design News. "Force gives useful properties for knowing what the robot is touching. For instance, is the object soft or hard? It's also valuable to have an estimate of how much force it's applying, especially around people." The team also includes doctoral student Tapomayukh Bhattacharjee and masters student Josh Wade. A paper on this research can be found here.

Once the robot has contact with other objects, it can find out more than just whether an object is soft or hard. It can infer more and have more situational awareness, said Kemp. "Thermal sensing has real advantages in the different ways to do this. It tells you a lot about what an object is made of, but it's been underexplored." Active thermal sensors can recognize materials based on their thermal properties, while passive thermal sensors can recognize heat generating objects, like human bodies.

The team made a prototype skin embedded with these sensors, wrapped around a cylinder to emulate a robot arm. A carbon fiber heating strip carries current through it to heat the fabric skin, somewhat like the way an electric blanket works, said Wade. In between the sensors is a piezoresistive fabric layer. The resistance changes with changes in force. Surrounding all this is a standard, off-the-shelf, stretchable, athletic blue fabric that insulates. "The temperature sensors themselves are thermistors," said Wade. "These are very small resistors, and resistance changes as a function of temperature."

The technology can cover a large surface area, like an entire robot arm, where previous work in this area has focused on something as small as a finger, said Kemp. The team is also using the technology with robots. "Our focus is not sensor design so much as what can robots do once they have this type of information," he said. "We've tried this out in real-world settings, touching real objects. We haven't put this very latest multimodal fabric on a robot yet, but we have tested robot arms covered with our previous work in fabric force sensing technologies."

Healthcare-related applications could include adding force sensing to a prosthesis, which would not be challenging to do. "For a long time, robots weren't supposed to contact the world with their arms," said Kemp. "But especially with reaching for things, like reaching around a human body if it's a healthcare robot, this could be very useful. If robot arms also have skin like people and animals do, it can make contact with the world by adding more sensors."

Ann R. Thryft has been writing about manufacturing- and electronics-related technologies for 29 years, covering manufacturing materials & processes, alternative energy, and robotics. In the past, she's also written about machine vision and all kinds of communications.