HomeMaterialsTouch-Sensitive Fibers Eyed for Use in Wearable Devices
Recent
Materials
Q&A With IndyCar Gearbox Expert Anna Chatten
May 13, 2022
Intel Unveils Trust Authority to Boost Security
May 13, 2022
Supplier News Looks at Highly Customizable Industrial Monitors
May 12, 2022
Here Technologies Maps are Key to Mercedes Level 3 Automation
May 12, 2022
POLL
'We Built the Domino's Pizza Tracker for Manufacturing'
May 12, 2022
Break Your Bubble Gum Habit by Watching Its Production
May 12, 2022
This Patch Monitors All Your Vitals, Including Blood Pressure
May 12, 2022
First E-Skin to Anticipate, Perceive Touch from All Directions
May 12, 2022

Touch-Sensitive Fibers Eyed for Use in Wearable Devices 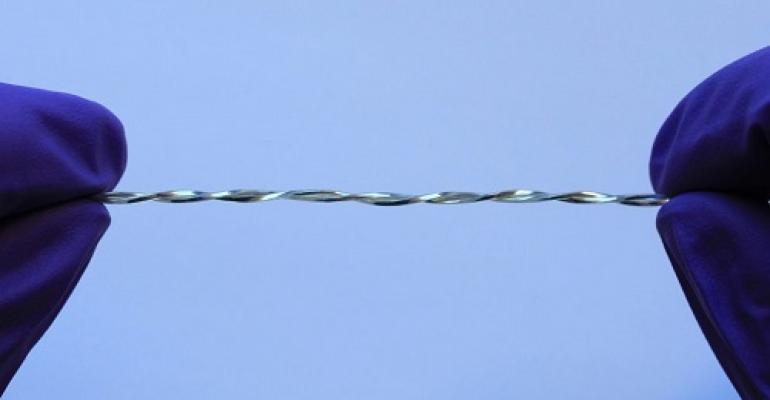 Touch-sensitive technology could be coming to wearables thanks to new elastic fibers developed by researchers at North Carolina State University.

Touchscreen-like capability may be coming to wearables thanks to new touch-sensitive elastic fibers developed by researchers at North Carolina State University.

A team of scientists at the university have developed soft and stretchable fibers that can detect touch, strain, and twisting, said Michael Dickey, a professor of chemical and biomolecular engineering. The fibers—which are microscopic—could be useful for integrating electronics in new places, including wearable technology, he said.

“They key idea is to be able to put touch sensitive technology in a fiber that is very stretchable,” Dickey told Design News in an interview.

Indeed, the technology invented by his team is “nearly identical to a touchscreen in terms of the sensing mechanism, [which is] capacitance, but there are two key physical differences,” he said. “It is in the shape of a fiber, which means it could--in principle--be incorporated into clothing for example and two, it is as stretchable as a rubber band.”

Dickey said the concept of the fibers is fairly simple. The team created hollow, elastic tubes and filled them with a liquid metal alloy of eutectic gallium and indium (EGaIn). The tubes, or fibers, consist of three strands that are only a few hundred microns in diameter, or just slightly thicker than a human hair.

Researchers filled the fibers with different volumes of EGaIn. One is completely filled with EGaIN, one is two-thirds filled, and one is only one-third filled with with the alloy. They then twisted the slim tubes together into a tight spiral, he said.

Because the metal is liquid, stretching the tube moves the metal along with it and stays conductive, Dickey explained. “It can sense touch due to changes in capacitance between the metal and your finger (your body is essentially a conductor) which are separated by the walls of the tube,” he said. For the technology to work, it also needs an electrical conductor separated from a person’s body by an insulator, Dickey added.

The complete effect provides the ability to send different electronic signals depending on which part of the fiber you touch. Researchers also developed a touch sensor using two polymer strands, both of which are completely filled with EGaIn, and again twisted them into a tight spiral. Increasing the number of twists elongates the elastic strands and brings the EGaIn in the two tubes closer together, which changes the capacitance between the two strands.

“We can tell how many times the fiber has been twisted based on the change in capacitance,” Dickey said. “That’s valuable for use in torsion sensors, which measure how many times, and how quickly, something revolves. The advantage of our sensor is that it is built from elastic materials and can therefore be twisted 100 times more--two orders of magnitude--than existing torsion sensors.”

The team demonstrates how the technology works in the below YouTube video. Researchers also published a paper on their work in the journal Advanced Functional Materials.

Dickey said researchers are currently exploring how to scale up production of the fibers, which can currently be produced at hundreds to thousands of feet per minute, which already is quite fast, he noted.

“We are working on ways to add the metal at similar speeds,” Dickey said. “There are still some challenges for mass production, but in principle, it seems like it should scale.”