HomeMaterialsThey're Coming Down, So Expect to See More Ceramic, Metal Matrix Composites
Recent
Materials
AAA Testing Highlights Automated Driving Failures
May 25, 2022
Top 10 Semiconductor Suppliers of 2021
May 25, 2022
Strategies to Reduce Noise and Vibrations in Vehicles
May 25, 2022
NI CEO Says Data and Testing Key to Future Technology Success
May 25, 2022
POLL
NASA Space Missions: To Infinity and Beyond
May 25, 2022
Rivian Patents Automated EV Charging Connector
May 24, 2022
3D Molding Analysis Software Moves to Smart Design
May 24, 2022
'A Game Maker's Life' Book Looks Back at the Invention of Iconic Toys
May 23, 2022

They're Coming Down, So Expect to See More Ceramic, Metal Matrix Composites 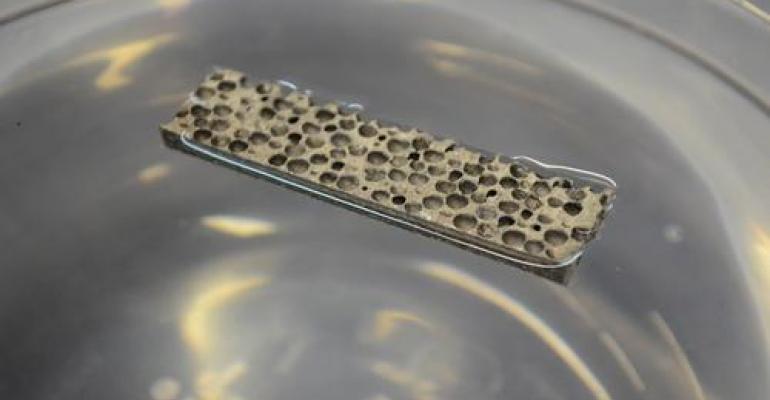 Ceramic matrix composites (CMCs) and metal matrix composites (MMCs) have long played an important role for the military and aerospace in protecting military vehicles, as well as spacecraft and space vehicles. But those aren't the only places you'll find these light and strong composites: they're showing up in less exotic places like commercial jet engines and industrial turbines, plus all kinds of electronics.

Until recently, both materials groups were used sparsely in a few high-end niche applications because of their high cost, a result both of the materials and the complexity of manufacturing processes. MMCs are usually developed for very specific applications where several properties are needed. For example, an MMC used in spacecraft may need resistance to high temperatures and low weight. These composites are usually fabricated with a metal matrix reinforced by a different metal or another material altogether, such as silicon carbide particles, or ceramic particles or fibers. 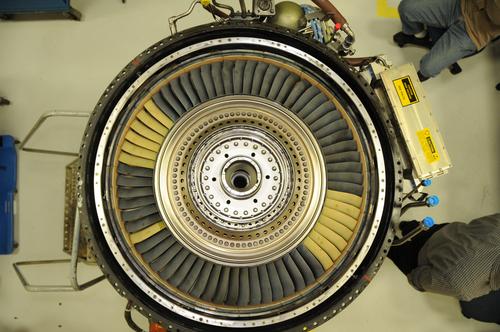 In CMCs the matrix is a ceramic material reinforced by particles or fibers. Reinforcement materials may be ceramic, silicon carbide, alumina, or carbon. These composites are valued for their thermal properties, which can outshine those of MMCs, as well as much lighter weight, high strength, and wear resistance.

Although CMCs are usually designed and fabricated for uses such as thermal management and armor for military vehicles, they're also being developed internally by OEMs such as GE Aviation and Pratt & Whitney to replace metals for components in the hot areas of high-pressure turbine jet engines. According to a recent market report by Technavio, R&D to develop CMCs for jet engines, as well as for electronics thermal interface materials, will spark rapid growth in production of these materials in the next few years.

GE Aviation has been developing CMCs for commercial and military jet engine components, and testing them extensively, for over 20 years. All of GE's CMC technology has been developed in-house, said Jonathan Blank, general manager of CMCs and advanced polymer matrix composite research. GE is working to introduce CMCs into the hot zones of jet engines, as well as industrial gas turbines, for their strength, toughness, and ability to be manufactured at mass production scale. The benefits will include big reductions in weight, emissions, and engine noise. GE's CMC technology combines ceramic resin matrices reinforced with silicon carbide ceramic fibers, and coated with proprietary materials.

The best-known result of this R&D will be parts in GE's LEAP engine, in development by GE and Snecma joint venture CFM International, which began flight testing this year and is scheduled to enter service in 2016. Its shrouds in the high-pressure turbine section will be made of GE's CMCs, designed and built internally. Next up will be the GE9X engine, to be introduced around 2020, which will include CMC components in the combustor and high-pressure turbine sections. GE is also building military jet engines with CMC components.

Similar to designing with advanced processes like additive manufacturing, designing with advanced materials like CMCs changes how design engineers approach development. "Both inside and outside aviation, the paradigm of the last several decades has been to first design your component, module, or system and then pick the materials you want or can use in that product," said Blank. "But with these advanced materials, you need to know how to manufacture that material system to get the most out of it. That changes the way design engineers will think, design, and manufacture going forward."

Earlier this year GE saw a major technology breakthrough: the successful run of high-speed rotating silicon-carbide CMC turbine blades in an F414 military demonstrator engine. The breakthrough was in the use of CMCs in moving parts in the engine's hot section. All previous CMC jet engine components have been static. Swapping out nickel blades for ceramic ones will reduce blade weight by one third. But that's not all -- since lighter blades also generate less centrifugal force, other parts like the disk and bearings can also be slimmed down, said Blank. That means that using CMCs is driving some revolutionary changes in jet engine design.

Although designing with CMCs brings benefits like more design freedom, it also poses challenges, like understanding how to design with them. This has been one of GE's biggest challenges with CMCs. "We've done a lot of work with polymer matrix composites, but how do we take this ceramic composite material and use its properties to design those parts in the engine system to work with the other materials in the parts around it?" said Blank. "How can we get the most out of it? Because we can change those material properties based on how we actually manufacture the CMC. I can adjust my mechanical and thermal properties with this material in a way I've never had before. How can I add this new dimension to my toolkit and use it in the most efficient manner for this product? And how can I do so at the right rate, producability, durability, performance, life cycle, and so on. How do I change that paradigm of designing with this new material so it opens up design possibilities?" 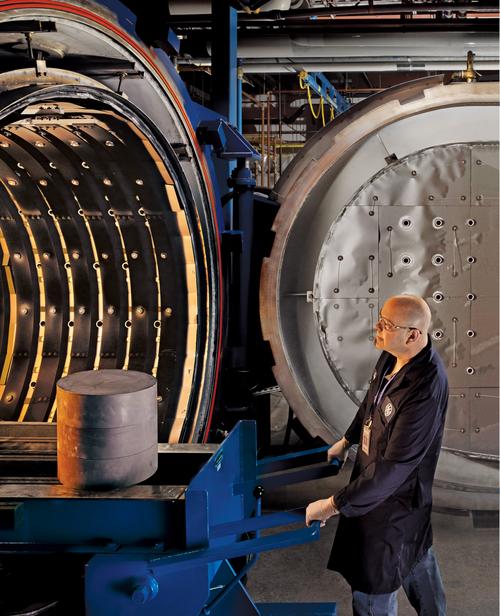 Another major effort for GE Aviation has been creating the vertically-integrated supply chain necessary to mass-produce CMC components. This supply chain now includes everything down to the fiber, and comprises multiple facilities. Turbine components for the F414 test were built at GE's small-scale CMC production facility in Newark, Delaware, and static parts for the LEAP engine will be built at GE's mass production facility in Asheville, North Carolina, opened last year. Also last year, the company opened a new research lab at its Evendale, Ohio, headquarters for rapid prototyping and testing of CMC concepts, and to develop part production techniques.

Compared to CMCs, MMCs have generally been applied to more rarified uses. In addition to aerospace and military, MMCs appear in transportation applications, such as friction brakes for commercial and consumer vehicles. There they often combine magnesium or aluminum with ceramics to replace cast iron, with the advantage of lighter weight and better resistance to sudden shifts in pressure and temperature. They also appear in push rods for racing engines, as well as components like attach plates used in high-speed robots, and thermal management devices for hybrid electric vehicles and various electronics.

Compared to aluminum, the thermal conductivity and weight of the company's AlSiC MMCs are similar, but with controlled thermal expansion values of one half to one third. This material weighs about the same as aluminum, but with stiffness the same as cast iron. When the aluminum matrix is reinforced with continuous ceramic fibers instead of discontinuous silicon carbide particles, the MMC weighs less than half as much as high-strength steel, with equal strength and stiffness. The company's casting process results in near-net shape parts, and MMCs can include aluminum, steel or titanium threaded inserts.

More recently, CPS has also developed its MMCs and casting process for components used in mechanical, structural, and armor applications. For example, MMCs are combined with ceramic tiles in a technology developed to strengthen composite ballistic armor systems. This HybridTech Armor selectively reinforces the ceramic tiles in composite armor systems with both metals and MMCs, enclosing them in a hermetic layer made of high-pressure cast aluminum. The hybrid ceramic modules can be drilled and bolted like metal.

Aluminum-based MMCs comprised the largest product segment of these composites, accounting for over 30% of total demand in 2014, according to a recent market study by Grand View Research, and MMCs are growing in transportation including the automotive, aerospace, and marine industries. Refractory metal matrix materials such as tantalum and tungsten will increase the most in MMCs due to their malleability, ductility, and high tensile strength. 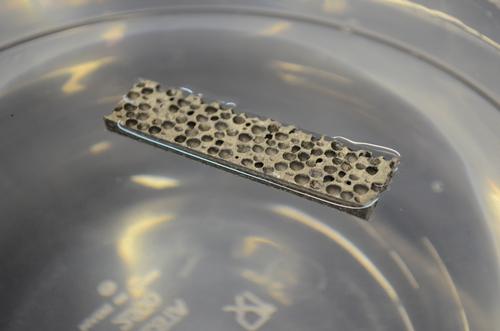 Some researchers, such as the NYU Polytechnic School of Engineering, have developed MMCs with extremely unusual properties that rival or surpass those of polymer matrix composites. The NYU engineers, along with a team from Deep Springs Technology, has designed an MMC foam that's so light it floats on water. Based on syntactic foams, which in themselves are not a new idea, this composite is the first time these foams have been used in an MMC.

The new material, a magnesium alloy matrix composite reinforced with hollow silicon carbide particles, combines heat resistance with light weight. The research team expects to have prototypes to test in the next three years for possible use in amphibious vehicles or automobiles. Even lighter than polymer matrix composites, such ultra-light MMCs could also have superior thermal properties, making them good candidates for structural components such as boat flooring or vehicle armor, as well as engine and exhaust parts.