HomeMaterialsSynthetic Mother-of-Pearl Is Stronger than the Real Thing
Recent
Materials
Q&A With IndyCar Gearbox Expert Anna Chatten
May 13, 2022
Intel Unveils Trust Authority to Boost Security
May 13, 2022
Supplier News Looks at Highly Customizable Industrial Monitors
May 12, 2022
Here Technologies Maps are Key to Mercedes Level 3 Automation
May 12, 2022
POLL
'We Built the Domino's Pizza Tracker for Manufacturing'
May 12, 2022
Break Your Bubble Gum Habit by Watching Its Production
May 12, 2022
This Patch Monitors All Your Vitals, Including Blood Pressure
May 12, 2022
First E-Skin to Anticipate, Perceive Touch from All Directions
May 12, 2022

Synthetic Mother-of-Pearl Is Stronger than the Real Thing 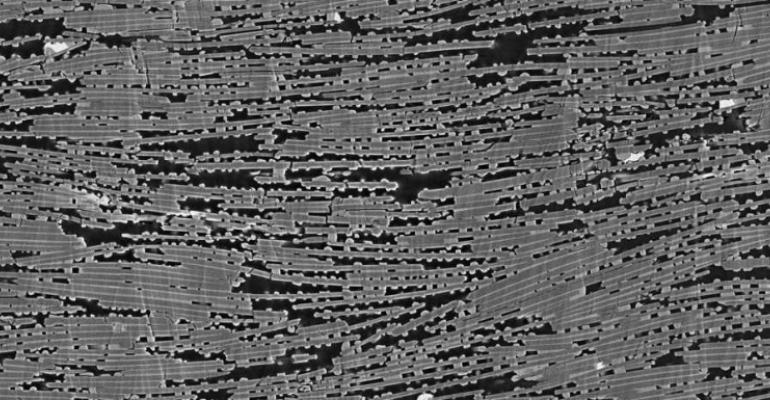 Researchers in Switzerland have developed a bio-inspired material based on mother-of-pearl with unique strength and stiffness.

As one of the hardest, most stable and strong natural materials, mother-of-pearl—found in natural organisms such as mussels—has always fascinated scientists. Now a team at ETH Zurich has developed similar materials that may perform even better and can be used in various applications, they said in an ETH news release.

A research team from the Group for Complex Materials has been investigating the properties of mother-of-pearl—which looks somewhat like a small brick wall under a microscope—so they can mimic it.

A Structure of Bricks

In natural mother-of-pearl, the “bricks” in the structure are composed of tiny calcium carbonate plates stacked on top of each other and interconnected with mineral bridges, while the “mortar” is an organic substance. In their design, Studart’s team used commercially available aluminum oxide plates a few dozen micrometers in size, and an epoxy resin to cement the joints.

To specifically create the material, they aligned the magnetized plates—dissolved in aqueous solution as desired in one direction—in a rotating magnetic field. Then they used high pressure and temperatures of around 1000 degrees Celsius to solidify the material by adding the resin.

The resulting material has a similar microstructure to natural mother-of-pearl, researchers said. But they didn’t stop there. To make it even more stable and harder, scientists used plates coated with titanium oxide, forming droplets on the surface of the platelets to turn into bridges.

This extra step in material development makes the entire structure more stable, said Kunal Masania, one of the researchers and a co-author of a paper published about the work in the journal PNAS. "These bridges also influence significantly the strength of the material," he said.

Moreover, researchers can precisely adjust the density of the titanium bridges by pressure and temperature to produce artificial mother-of-pearl with high levels of stiffness, strength, and fracture toughness—those comparable to carbon-fiber composites, they said. Researchers expect the material will be well-suited to numerous applications, such as in construction, aircraft, and aerospace, Masania added.