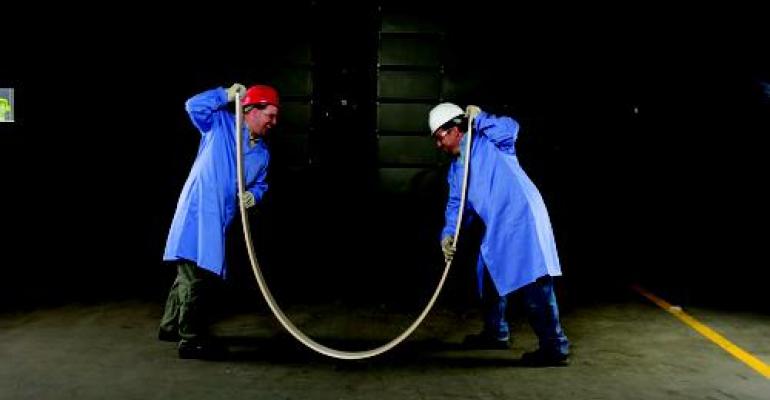 Materials makers are coming up with a variety of ways to make structural composites, from recycled plastic bottles that become weight-bearing elements of heavy load bridges to substituting coconut fibers for traditional ceramic fibers in biocomposite tiles for walls and floors. Now a thermoplastic-mineral composite replicates wood's fibrous structure and is contending with wood, wood plastic composites, plastics, and metal in a range of structural applications.

The material is a fully fiberized, molecularly oriented, lineal composite system from Eovations, which is licensing the technology, said Claude Brown, vice president of technology & innovation for Eovations, in an interview. At present, structural applications include marine uses for docks, pier, seawalls, and pontoons, as well as the cargo decks of vehicles and truck liners. One of the company's primary near-term focuses is the building industry, where it can be used as a Trex replacement for structural framing, as well as for non-structural uses. 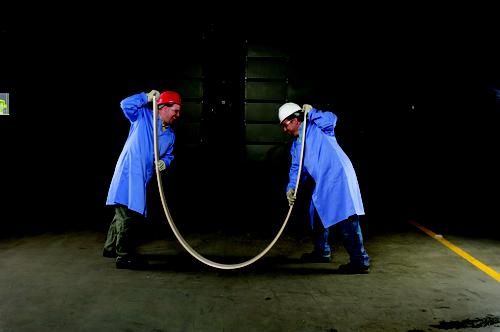 But it's a bit different from other wood and polymer composites like Trex. The company uses a proprietary extrusion/drawing process to combine mineral particles with a thermoplastic matrix. It's a composite because it combines two distinct materials and phases, Brown told us. Half of the composite consists of polymer, mostly polypropylene, and the other 50 percent is a mineral filler. The process first creates a small-scale fiber matrix, and then orients polymer chains within the individual fibers into a composite structure.

Eovations uses several mineral fillers. These are present primarily as a physical nucleation site, not a chemical nucleation site, since their chemistry is less important than the right size and aspect ratio, Brown said. The material also replicates the structure of wood with an internal closed cell structure that reduces the weight of the material without sacrificing its strength. Open spaces are included as capillary-like structures between the strands, so that about 56 percent of the composite's volume is air.

The new composite has a much higher modulus of elasticity at 500,000 psi to 800,000 psi than Trex, for example, which is typically 300,000 psi, and it costs about the same as similar synthetic decking products for construction uses. It does not have a catastrophic failure mode: the modulus of rupture is zero. That means it can be valuable as a hurricane-proof material, said Brown.

"A piece of it 5/16 inches thick can pass all the hurricane standards by itself, not including any other structure. A 55 mph wind leaves only a small impression, about 3/8 inches, but it bounces off of the structure," he told us. The composite's moisture absorption is less than 0.2 percent and densities are between 0.5g/cc and 1.0 g/cc (you can access the technical data sheet here).

The material's wide processing window means that properties of the finished composite, such as density, can be customized. It can be worked like wood with common woodworking tools, including cutting, sawing, machining, and drilling. Conventional fasteners such as nails, screws, and staples can be used, and their acceptance and hold is even better than wood's.

The technology was originally developed at Dow Chemical, but never commercialized, according to Brown. Eovations's parent company, Universal Forest Products, bought the technology from Dow in 2010.