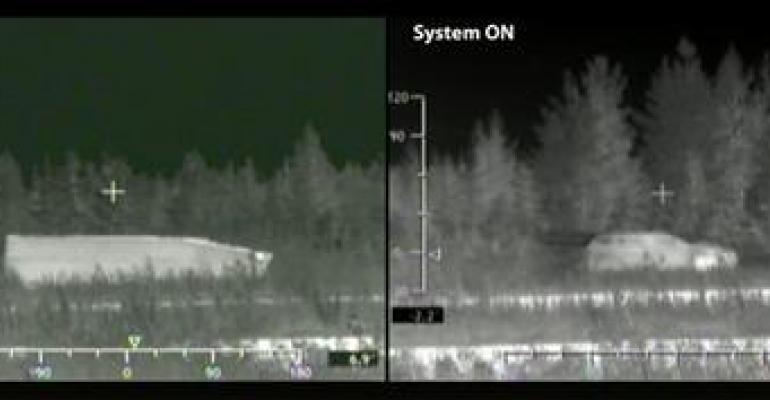 Infrared-camouflaging tiles developed by engineers at BAE Systems in Ornskoldsvik, Sweden, can alter military vehicles' infrared (IR) signatures so that troop carriers could appear to be passenger cars or even blend into the background.

The technology, known as BAE's ADAPTIV system, enables operators to alter IR signatures by precisely controlling the temperature of a collection of metal panels. The skin consists of a collection of salad-plate-sized hexagonal tiles that essentially act as pixels to develop the desired image. Each tile features a sensor to monitor temperature and thermoelectric (TE) heat pumps to either heat or cool the surface of the metal as desired. 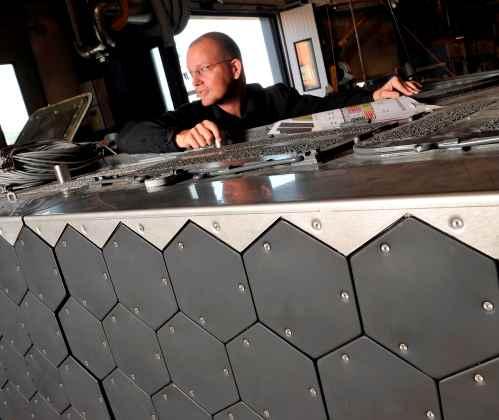 A big reason the skin is significant is because it can potentially reduce the need for additional armor -- thick metal plates, which increase weight and decrease mobility, thus making the vehicle more vulnerable to attack. In this sense, ADAPTIV substitutes intelligent countermeasures -- the ability to vary IR signatures -- for the armor.

Perhaps the most important part of the system is the microcontroller that monitors temperature data and adjusts current flow to each pixel in real-time to tune the temperature of the vehicle's surface on a pixel-by-pixel basis to generate the appropriate signature. Alternatively, the system can use feedback from an IR camera to match the temperature of the tiles to the surroundings, effectively rendering the vehicle invisible to IR imagers. "The nice thing is that you can do it very precisely," says project manager Peder Sjolund, noting that the system provides temperature control to within 1 degrees C.

A circuit card in each tile provides diagnostic capabilities. The system leverages wireless communications, allowing it to sidestep the data bus of the vehicle. Those attributes are important in today's military vehicles, which boast an array of stealth technologies that consume bandwidth, not just in terms of data communications but in terms of operator attention. BAE tested the system on a Combat Vehicle 90 (CV90). "There are a lot of other systems on board and the real trick is to integrate them all in such a way as to reduce as far as possible the stress and workload you're putting on the crew," says Michael Sweeney of BAE.

From the beginning, the design team focused on making the system as cost-effective as possible by leveraging commercial off-the-shelf (COTS) components. The design philosophy presented a list of challenges, including finding sufficiently robust components with appropriate lifetimes, and also lifecycles. After all, consumer electronics feature lifecycles that are a fraction of the lifetime of a fighting vehicle.

One obvious question that comes to mind about the smart skin is power consumption. After all, although a fighting vehicle features a battery and alternator, it is still essentially a portable device and high power draw can limit range. In addition, electronics tend to produce heat, raising the possibility that the very circuitry intended to monitor and set a temperature level in each tile might actually create heat that it needs to manage. According to Sjolund, the system does consume some power when it is transitioning to a specific thermal signature. Once the tiles have reached the correct temperature, however, the smart skin requires minimal power draw to maintain a steady-state condition.

There is another military application that is of even greater interest than camouflage: avoiding friendly fire by identification of friend or foe (IFF). The smart skin can create large identification tags in the form of heated or cooled symbols that can be easily identified even at large distances by friendly forces using IR image sensors such as sights, surveillance sensors, or reconnaissance equipment. "The symbols can be turned on and off at will, or placed anywhere on the vehicle for best exposure," says Sjolund.

Although the ADAPTIV technology has only been demonstrated on ground vehicles to date, BAE says the approach could be easily applied to helicopters and surface ships.