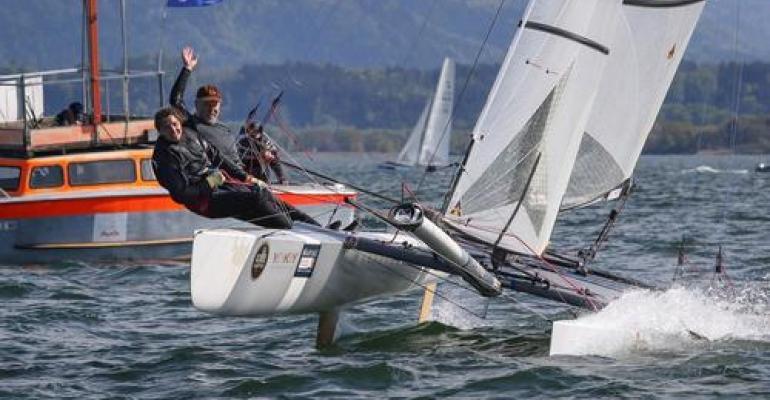 Some time this month, a super-fast, ultra-lightweight foiling catamaran that can fly short distances is due to be launched. The first SpeedFoiler prototype will fly over the water faster than other foiling designs in part because of its carbon composite materials.

The SpeedFoiler is being designed by German materials innovator Evonik and the German-Danish TeamGaebler. The boat will be sailed by two persons in the trapeze. TeamGaebler is the most successful mixed sailing team, consisting of Olympic medalist and world champion Roland Gaebler and his wife Nahid Gaebler. They say the boat is aimed not only at professionals, but at "ambitious amateurs" who can compete with it in open regattas. 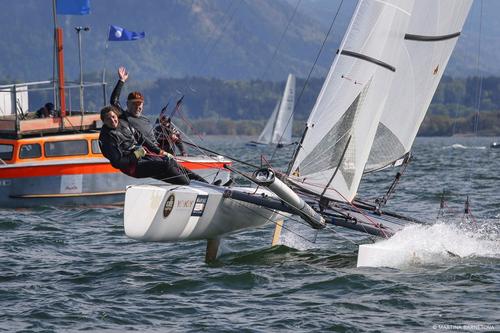 The SpeedFoiler super-fast, ultra-lightweight foiling catamaran is being designed by multihull and hydrofoil designer Martin Fischer for the German-Danish TeamGaebler, with materials input by German materials innovator Evonik. TeamGaebler, the most successful mixed sailing team, consists of Olympic medalist and world champion Roland Gaebler and his wife Nahid Gaebler.

TeamGaebler's goal in designing the new catamaran is to develop the fastest two-person serial sailboat in the world. Designed for the FoilingWorldCup and the Little Cup, the SpeedFoiler has the dimensions of a C-class multihull at 7.62m x 4.26m. Its mast height is 12m, and its sail area ranges from 90 m2 in a light wind to 28 m2 in strong wind.

The boat's extreme light weight of only 178 kg, as well as careful design of the sails, hull, and attachments, make it possible to start races from 1 knot on, and to fly over the water. The SpeedFoiler will be sailed close to the coast and will be able to lift out of the water even with only light winds. Upper wind limit will be around 30 knots. 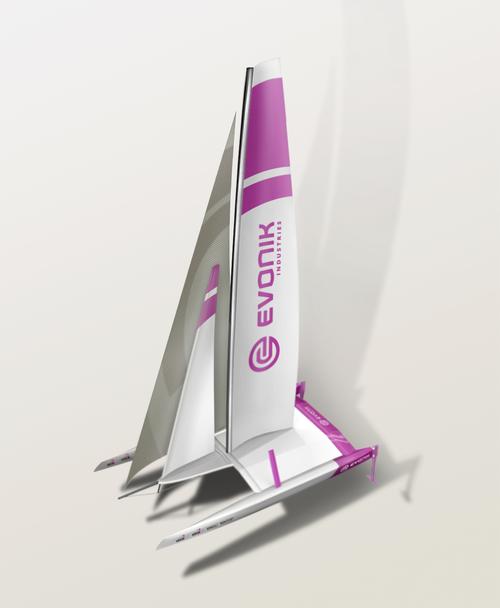 In sailing, this liftoff is called foiling. The foils are located underneath both hulls, at the center. They look like bent swords, and act like the wings of an aircraft. As the sailboat moves and picks up speed, the foils generate uplift to lift the hull out of the water, resistance decreases, and the boat accelerates on the foils. The SpeedFoiler will be able to reach speeds of up to 70 kph, said Roland Graeber.

Well-known multihull and hydrofoil designer Martin Fischer is the boat's designer. Because the hull lifts so fast, water resistance played a relatively minor role in the catamaran's design. Instead, Fischer focused on its aerodynamics, and on ways to improve its flying characteristics.

A closeup of the SpeedFoiler design showing the foils. These are placed at the center under each hull and act like an aircraft's wings.

For instance, the trampoline, which is the wide central section connecting both hulls, supports the boat's lift. Also, different-sized sails can be used in different wind speeds, and can be drawn up to 12m high on the mast. The smaller, 28-square-meter sailcloth is deployed in strong winds, while the huge, 90-square-meter "CodeZero" sail is used in weak winds. This flexibility means the catamaran can be sailed in nearly all wind conditions.

Evonik contributed several materials to the boat's construction. The rudder and the foils are made entirely of carbon fiber composites. These consist of very fine carbon fibers combined with Evonik's VESTANAT PP, a matrix system for polyurethane prepregs that enables a different way of processing and industrial-scale automation. Compared to epoxy prepreg, it has less than one-third the chemical shrinkage, higher modulus, a glass transition temperature of 140C instead of 125C, and superior shear and flexural strength.

The catamaran's rudder and foils are made entirely of carbon fiber composites, while the hulls are built as a sandwich structure of composites enclosing a lightweight but strong structural foam.

Evonik's VESTAMIN hardening agent is then applied, and the additive NANOPOX makes the material extremely resistant so that it will not break if two boats come into contact. To save some weight in the hulls, these are built as a sandwich structure of composites enclosing the lightweight but strong ROHACELL structural foam. These products, and the technologies used for the boat's stable but light construction, are derived from Evonik's experience in the automotive and aviation industries, and are used in Formula 1 cars and Airbus aircraft.

Roland and Nahid Gaebler will initially use the SpeedFoiler in established regattas, and later in their own racing series, the FoilingWorldCup. TeamGaebler will also participate at Little Cup and other legendary endurance races with the SpeedFoiler. In addition, a European Cup is planned.