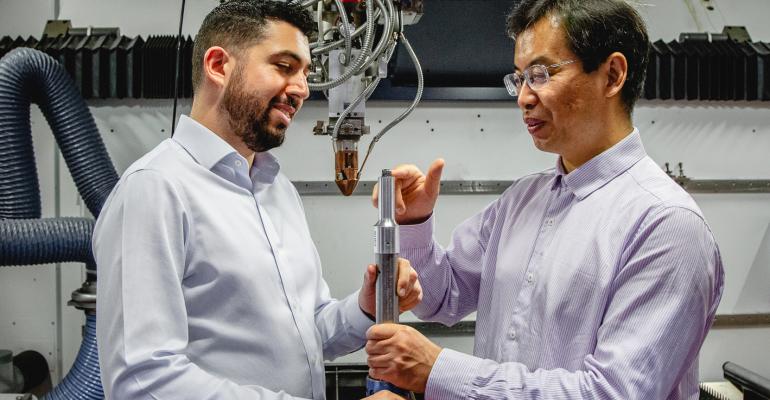 Additive manufacturing with metals has come a long way in recent years; however, researchers are always seeking improvements to help make the process of printing with these type of materials more stable from beginning to completion.

Researchers at RMIT University have discovered a potential new way to do this using high-frequency sound waves that they discovered can transform certain alloys into stronger, more durable materials.

Specifically, a team from the university’s School of Engineering has discovered that using ultrasound can strengthen the inner micro-structure of 3D-printed alloys to improve their consistency in additive-manufacturing processes, said Carmelo Todaro, a PhD candidate from RMIT University’s School of Engineering and one of the researchers on the project.

The key to the work, which was conducted at RMIT University’s Advanced Manufacturing Precinct, has its foundation in Todaro and his colleague’s observance of the microscopic structure of 3D printed alloys, which are often made up of large and elongated crystals, he said. “This can make them less acceptable for engineering applications due to their lower mechanical performance and increased tendency to crack during printing,” Todaro explained.

However, researchers found that if they applied ultrasound to certain alloys during printing, the results would be quite different. “The alloy crystals were very fine and fully equiaxed, meaning they had formed equally in all directions throughout the entire printed metal part,” he said.

The team demonstrated their ultrasound approach using two major commercial grade alloys. One, Ti-6Al-4V, is a titanium alloy commonly used for aircraft parts and biomechanical implants. The other is known as a nickel-based superalloy often used in marine and petroleum industries called Inconel 625.

By simply switching the ultrasonic generator on and off during printing, the team showed how specific parts of a 3D-printed object can be made with different microscopic structures and compositions. This technique can be useful for what’s known as functional grading in this type of additive-manufacturing process.

In the case of the titanium alloy, researchers used high-intensity ultrasound to change the alloy’s microscopic structure from columnar grains to fine, equiaxed grains in a laser powder deposition additive-manufacturing process, researchers wrote in an abstract for a paper on their work in the journal Nature Communications. “This results in a 12% improvement in both the yield stress and tensile strength compared with the conventional AM columnar Ti-6Al-4V,” researchers wrote in the abstract.

The team also applied the same principle and process to nickel-based Inconel 625 and achieved a “similar grain structure” in that alloy as well.  Ultimately these results suggest “ that this method may be applicable to other metallic materials that exhibit columnar grain structures” in additive-manufacturing processes.

Researchers hope that their work eventually will inspire the design of specially-made ultrasound devices for metal 3D printing, Ma Qian, a distinguished professor at RMIT that led the research, said in a press statement. “We anticipate this technique can be scaled up to enable 3D printing of most industrially relevant metal alloys for higher‑performance structural parts or structurally graded alloys,” he said.