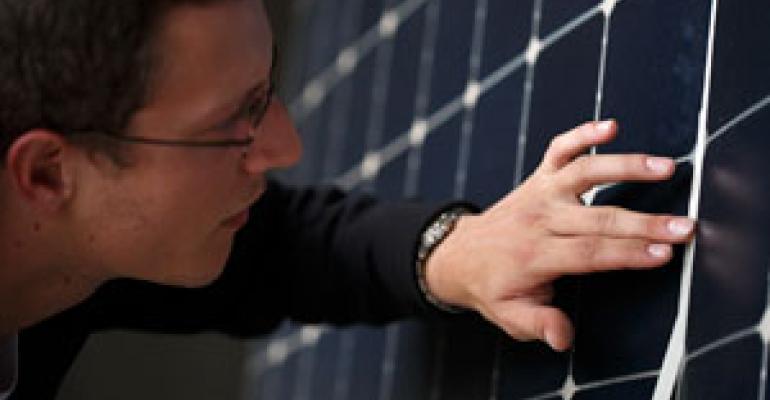 In 2012, a manned aircraft powered by 11,628 photovoltaic cells covering 2,200 sq ft of wing space will circumnavigate the globe - if a global engineering team can make it light enough.

Called the Solar Impulse, the first prototype of the aircraft flew an entire daily solar cycle, including nearly nine hours of night flying, in July.

"During the whole of the flight, I just sat there and watched the battery charge level rise and rise. Sitting in a plane producing more energy than it consumes is a fantastic feeling", says Andre Borschberg, CEO and co-founder of the Solar Impulse project.

"Flying by night using solely solar power is a stunning manifestation of the potential that clean technologies offer today to reduce the dependency of our society on fossil fuels," says Bertrand Piccard, initiator and president of Solar Impulse.

The engineer heading up the structural design of the Solar Impulse is Peter Frei, who graduated from the Swiss Federal Institute of Technology (ETHZ) in mechanical engineering with specialization in fluid dynamics and lightweight structures. Frei also is a former Swiss fighter pilot.

Reporting to Frei are a small group of staff engineers and a large group who work for corporate partners. They include Claude Michel, senior vice president at Solvay and head of the Solvay-Solar Impulse Partnership. The Solvay Group is one of the three major funding partners for the aircraft and the current prototype features a profusion of new materials developments from Solvay companies such as Solvay Advanced Polymers in Alpharetta, GA, and Solvay Solexis of Milan, Italy.

"In terms of technical constraints, the question is very simple," Michel told Design News. "We need a surface area of photovoltaics that delivers enough energy to put into the air a certain amount of weight. This is what we call the equation of the Solar Impulse. One square meter in photovoltaics delivers 30 watts, and with that 30 watts, we can put 8 kg (17.6 lb) in the air. This is our target, and it is an everyday obsession."

One of the most interesting lightweighting solutions is a honeycomb structure sandwiched between two carbon fiber foils that function as wing and stabilizer spars. The honeycomb is a lightweight paper structure impregnated with a Torlon AI10 polyamide-imide polymer via a dipping process. The result is a composite structure that possesses excellent mechanical properties, including strength, torsion, flexion and vibration. Sections of the wing that are 66-ft long can be easily handled by a few people.

Torlon, originally developed by Union Carbide, functions as a glue in the honeycomb structure. It features the highest strength and stiffness of any thermoplastic up to 525F and has outstanding resistance to wear, creep and chemicals, making it ideal for severe environments.

Another interesting development is a centering cylinder for the landing system. It was initially designed in aluminum and is being replaced with Ixef polyarylamide 1022.

Ixef compounds are typically highly loaded with glass (50 to 60 percent) and possess the tensile and flexural strength similar to many cast metals and alloys at ambient temperature. Ixef 1032 (60-percent glass fiber) exhibits typical values of 280 MPa at 73F.

The internal cylinder component is machined to its final dimension from an extruded rod of Ixef 1022. The external part remains aluminum due to impact requirements. The shaft is made from PrimoSpire SRP due to its intrinsic modulus and its machinability. PrimoSpire self-reinforced polyphenylene (SRP) is one of the stiffest and strongest unreinforced plastics available. Even without fiber reinforcement, PrimoSpire SRP delivers tensile properties that are comparable to those of many reinforced plastics. The added benefits are lighter weight and no loss of ductility.

Radel polyphenylsulfone is used for the rear attachment legs in the landing system assembly due to its high deformation capability.

Many other plastics from Solvay Advanced Polymers are used for other parts, more than 6,000 all together, such as bolts, screws, nuts and washers in the HB-SIA prototype to minimize weight.

High-performance plastic films play an important role in stabilizing the wings of the Solar Impulse.

"The wings are somewhat flexible," says Michel. "Their shape is quite different on the ground than in the air. We can use films to alleviate this."

Solef PVdF-based laminate is used to cover the ailerons, elevators, rudder, airbrakes and spoilers because of its mechanical strength at low thickness (15 microns). It will be used for the entire airplane wings of the next version of the Solar Impulse, called HB-SIB, if Solvay can provide the material in 3m (9.8 ft) width. The development partners for the new technology are Parkinson Technologies of Woonsocket, RI, for the film extrusion and with Jehier of Hutchinson, France, for the lamination.


It may surprise some design engineers how stiff that system is. The deflection, defined as the difference between ground and flight positions, at the wing tips is less than 0.5M (19.7 inch).

The film that protects the photovoltaic (PV) cells from the harsh environment is made from Halar ethylene chlorotrifluoroethylene (ECTFE).

Both plasma and corona treatments have been studied in order to increase the adhesiveness of the fluorinated films to the epoxy layer, the encapsulation material used by Solar Impulse. The thickness of the film produced by Ajedium of Newark, DE, was reduced to 17 microns, resulting in about 35 percent weight savings with acceptable electrical performance.

Solvay Solexis is looking for more ways to save weight. A solution with a single product replacing both the glass-reinforced epoxy layer and the top film is under evaluation.

A PVdF-based adhesive tape that is both UV-transparent and UV-resistant is used to close gaps between the solar cells.

The fuselage is made from carbon fiber rods encapsulated with polyester film. The name of the supplier of the polyester film was not made public. Decision, a Swiss boat builder, is the composite materials specialist for the Solar Impulse, and Bruhlmeier Modellbau, also Swiss, manufactures composite parts.

Polyurethane foams are used to make the cockpit of the airplane light, but also stable, while providing insulation.

"We're trying not to use any watts for heating or air conditioning," says Michel. The pilot must be protected from temperatures that can go as low as -40C (-40F), and the batteries must be kept above 15C (59F).

Lightweight polyurethane foam from Puren GmbH of Uberlingen, Germany, used in the engine cowling, cockpit cladding and the wings is based on raw materials from Bayer MaterialScience. The cockpit windows are made of thin but strong Makrofol polycarbonate film.

The bar is rising for the next version of the Solar Impulse both for structural requirements and materials' technologies.

One interesting possibility is the use of carbon nanotubes, which are described as the strongest and stiffest materials available in terms of tensile strength and elastic modulus, respectively.

BMS says they are nearly as strong as steel, but half as heavy. They also conduct electric current as effectively as copper.

Bayer MaterialScience operates a CNT plant in Leverkusen with an annual capacity of 200 metric tons. BCC Research forecasts that global sales of carbon nanotube-reinforced plastics will grow at an average annual rate exceeding 55 percent over the next five years for electrical/electronic, transportation, structural and other applications.

The second prototype is scheduled to fly around the world in five stages, each lasting five days, traveling at an average speed of 70 km/h (43.5 mph).

Improvements in battery technology will play a critical role.

"In order to fly at night, we need to store energy that is captured during the day," says Michel. "There are 400 kilos (882 lb) of batteries and this is the chief bottleneck in the system."

Electrical energy harvested by the solar cells is stored in lithium batteries, where PVdF is used as a binder for both electrodes. The PVdF also boosts the electrochemical stability of the cells, allowing repeated charging and discharging cycles at a high rate, without deterioration of battery performance.

Solvay says that a recently developed grade of PVdF offers very high adhesion to the electrodes, potentially contributing to the weight reduction of batteries for HB-SIB (the 2013 flight aircraft).

Solar Impulse originally used small cells with both front and back electrical contacts from RWE Solutions (now Azur Space Solar Power GmbH). The Solar Impulse engineering team is now using large cells (125 x 125 mm) from Sun Power (that are now on the prototype). These have back contacts, higher efficiency, and need less electrical connections due to their larger size.

For the design and development phases of Solar Impulse, Solvay performed more than 2,000 hours of non-linear finite element analysis (FEA) with ABAQUS on the thermo-mechanical behavior of several modules under different conditions. Linear simulation is used to model metallic structures.