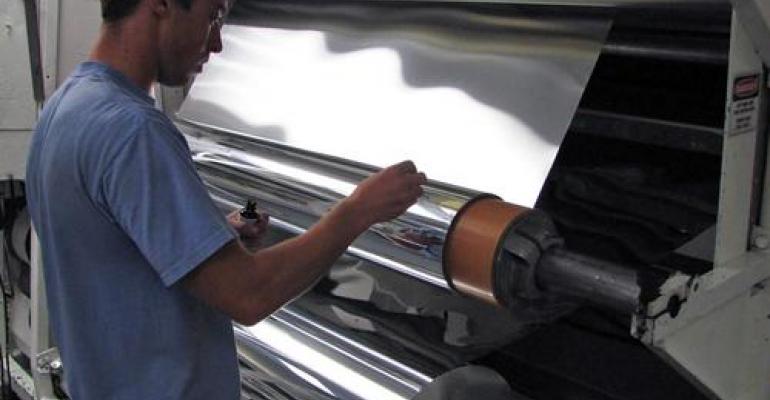 Nanosolar has completed a 1-megawatt, ground-mounted solar panel installation at a military base in California. The company's management are the inventors of a solar technology that prints metallic, nanoparticle inks on huge rolls of aluminum foil.

The high-throughput, roll-to-roll silkscreen-like printing process coats aluminum foil with a proprietary ink made of copper, indium, gallium, and selenium (CIGS). This process avoids the vacuum deposition that has been characteristic of many thin-film implementations and kept their cost high. The Nanosolar Utility Panel is, the company claims, the first solar panel to be developed for utility-scale deployment. Panels are longer, have higher power output, install faster, and require less cabling and mounting material. Nanosolar claims that its panels cost as much as 40 percent less per watt compared to conventional thin-film panels. 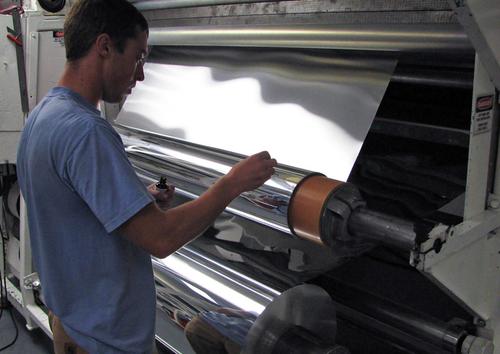 Most solar cells today are built with photovoltaic (PV) processes, using semiconductor-type manufacturing processes on crystalline silicon wafers. Thin-film PV processes deposit a variety of PV coating types on a variety of substrates, which are then scribed away to form circuits. Substrate material can vary, but is often glass, plastic, or metal. Although Nanosolar is not the only panel maker to use CIGS-type inks, its panel efficiencies are among the highest.

Thin-film PV is often considered to have higher efficiencies than crystalline silicon wafer methods of creating solar cells. But deposition methods can be complex and expensive. Nanosolar's process not only uses high-volume roll-to-roll printing, but the company says that its metal-wrap-through back contact design enables panels with higher mechanical and electrical stability than panels created with thin-film on glass methods. Watch videos showing the process here and here.

The process also produces cells more efficiently. Median efficiencies of the 230W panels are currently running at 11.5 percent. The company expects to increase that rate to 14 percent by 2013 and reach grid parity by 2015.

Nanosolar's most recent installation placed 4,992 panels at the Camp Roberts National Guard Base near Paso Robles, Calif. The project is funded by the US Department of Defense Environmental Security Technology Certification Program (ESTCP), which is testing a variety of alternative energy technologies.

Other installations are located at the Camp Perry Ohio National Guard Base, as well as in Portland, Ore. and Bordeaux, France. The company recently received ISO-9001:2008 certification for its German manufacturing plant. The certification covers all aspects of manufacturing and testing the panels.