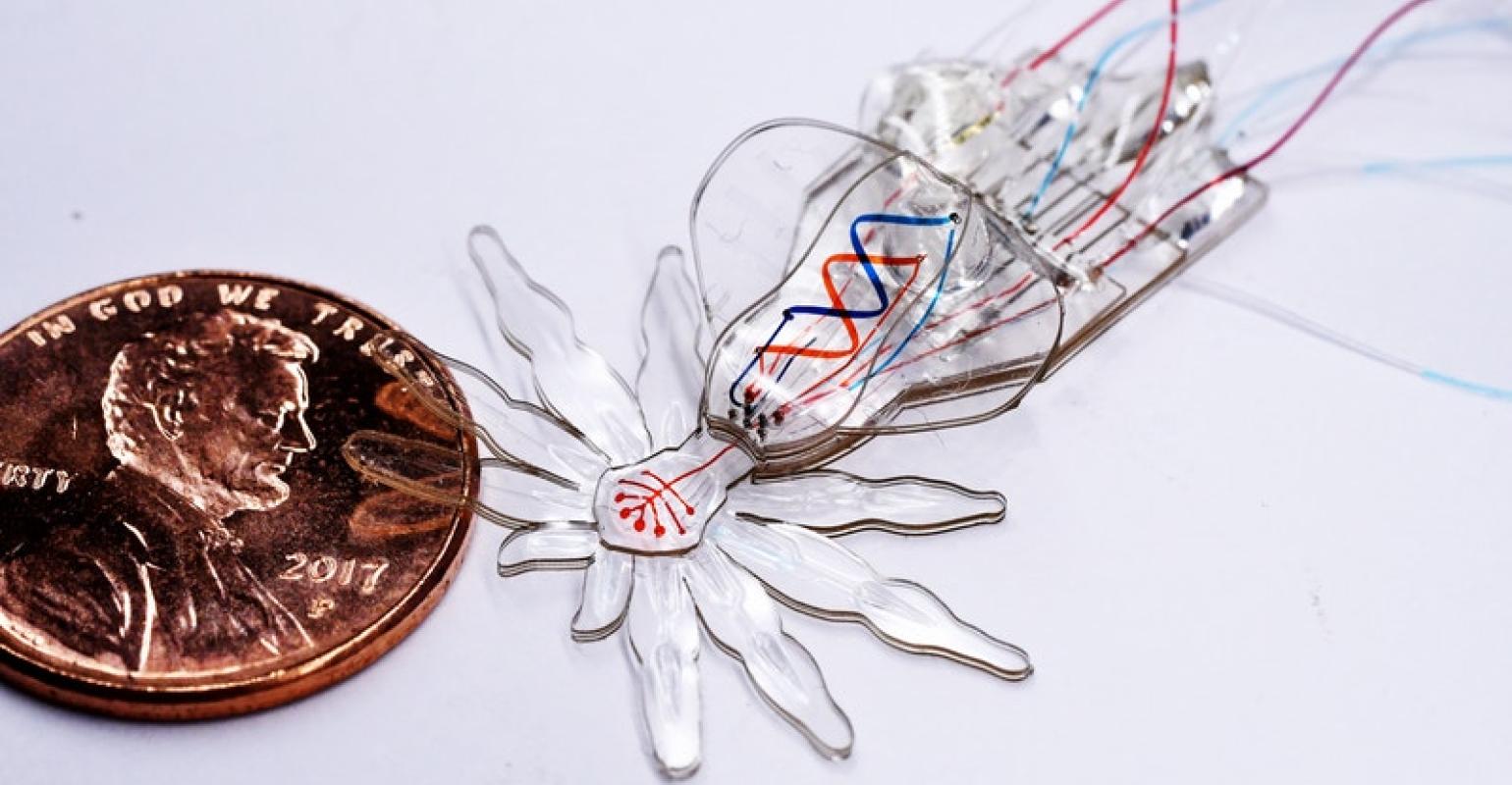 A millimeter-sized soft robotic spider is one of the smallest developed to date using a new fabrication process from researchers at Harvard University and Boston University.

A cross-institutional team from Harvard University and Boston University has developed one of the smallest soft robots to date using a new fabrication process. That process, which was developed by engineers at the universities, is called Microfluidic Origami for Reconfigurable Pneumatic/Hydraulic (MORPH) devices. To demonstrate it, they built a robotic soft spider inspired by the millimeter-sized, colorful Australian peacock spider.

Researchers already have developed soft robots that can move autonomously. But so far, they are on the centimeter scale and limited in their range of motion, said Sheila Russo, who was a postdoctoral fellow at the Wyss Institute and SEAS while working on the project and now is assistant professor at Boston University.

“The smallest soft robotic systems still tend to be very simple, with usually only one degree of freedom, which means that they can only actuate one particular change in shape or type of movement,” she said in the news release. The robot she and her collaborators developed, on the other hand, can move much more freely and change its shape various times, Russo said.

“By developing a new hybrid technology that merges three different fabrication techniques, we created a soft robotic spider made only of silicone rubber with 18 degrees of freedom, encompassing changes in structure, motion, and color, and with tiny features in the micrometer range,” she said.

The team included researchers from Harvard’s Wyss Institute for Biologically Inspired Engineering and the School of Engineering and Applied Sciences (SEAS). The process they designed uses a soft lithography technique to generate 12 layers of an elastic silicone, which together form the robot from a single elastic material, they reported in a news release from the Wyss Institute. Each silicone layer is precisely cut out of a mold with a laser-micromachining technique and then bonded to the one below to create the rough 3D structure of the soft spider.

This process induced individual layers, and with them their neighboring layers, to bend into final configuration, which becomes fixed once the resin hardens. It’s this way that allows, for example, the soft spider’s swollen abdomen and downward-curved legs to become permanent features, researchers said.

“We can precisely control this origami-like folding process by varying the thickness and relative consistency of the silicone material adjacent to the channels across different layers, or by laser-cutting at different distances from the channels,” said Tommaso Ranzani, who, like Russo, was a postdoctoral fellow when he worked on the research and now is an assistant professor at Boston University. “During pressurization, the channels then function as actuators that induce a permanent structural change,” he added.

Researchers used the remaining set of integrated microfluidic channels as additional actuators to colorize the robotic spider’s eyes and simulate the abdominal color patterns of its real-life counterpart by flowing colored fluids, he said. The channels also were used to induce walking-like movements in the leg structures.

“This first MORPH system was fabricated in a single, monolithic process that can be performed in a few days and easily iterated in design optimization efforts,” Ranzani said.

Researchers said their approach has the potential to pave the way for new directions in soft robotics for a variety of applications and industries. One of particular interest could be for medical purposes, in which the robots’ smaller sizes and flexibility could enable new approaches to procedures such as endoscopy and microsurgery, they said.

The team published a paper on its work in the journal Advanced Materials.