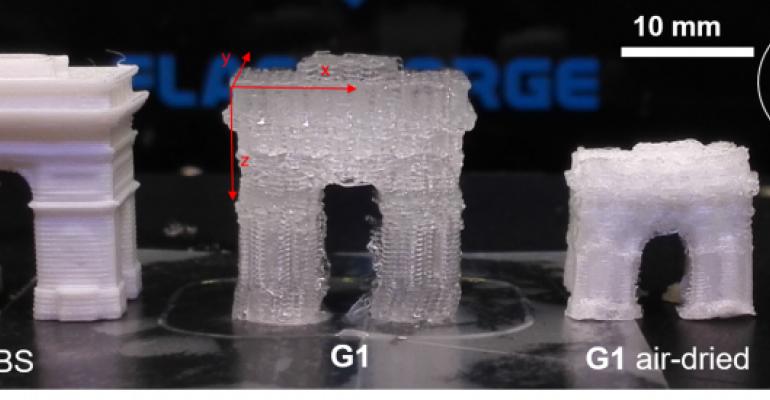 Researchers at Dartmouth College have advanced 4D printing with a smart ink that turns 3D-printed structures into shape-shifting objects for biomedicine and beyond.

It wasn’t long ago that 3D printing was a novel technology. But now, it’s rapidly evolving into its next generation: 4D printing, in which structures printed in 3D can transform themselves after fabrication. To advance this new phase, researchers at Dartmouth College have developed a smart ink that turns 3D-printed structures into objects that can change shape and color. This invention has the potential to add even more functionality to 3D-printed objects for industries ranging from biomedicine to energy and beyond, researchers said.

Today, most 3D-printed objects rely on photo-curing resins or thermoplastic materials that are static, explained Chenfeng Ke, an assistant professor of chemistry at Dartmouthwho led the project. Once the form is printed, it’s final, he told Design News. To take these materials to the next level, Ke’s team incorporated smart molecules into 3D-printed objects after printing. Those molecules alter their chemical structures upon environmental change.

“Our material is more ‘living,’” he explained. “The forms of molecular structure can be refined through our printing process—for example, they can change shape with chemical fuels or they can change color with lights.”

Specifically, the team used a polymer-based “vehicle” with the chemical name Pluronic F127 to integrate intelligent molecular systems into the ink and allow the transformation of their molecular functions to life-scale, Ke said.

“We use an extrusion-based 3D-printing method called direct-ink writing,” he explained. “With the polymer-based ‘vehicle,’ the functional molecules will self-assemble to a certain molecular architecture in the inks. After the ink is fabricated by direct-ink writing, this architecture is refined through an evaporation process. Then we introduce a series of post-printing reactions, which further lock the active ingredients together.”

Using this combination of pre-printing and post-printing techniques, researchers achieved a reduction in the size of printed objects to 1 percent of their original sizes and with 10 times the resolution, they said. The team even was able to animate 3D-printed objects to repeatedly expand and contract in size through the use of supramolecular pillars. Using fluorescent trackers, they also made the objects change color in response to an external stimulus such as light.

Because scientists will now have the ability to design objects that can change shape and function after printing, the technique can have a wide range of applications, Ke said. The design of new soft robots and responsive-sensing devices are just two of the areas that can benefit from the work, and researchers will continue to experiment to see what can be done, he said.

“By taking advantages of precise geometries controlled by 3D printing and living functions integrated by our chemistry, 3D-printed materials and devices with multiple functions for chemical engineering or biological applications are currently undergoing,” Ke said. Researchers published a paper on their work in the journal Angewandte Chemie.

Elizabeth Montalbano is a freelance writer who has written about technology and culture for 20 years. She has lived and worked as a professional journalist in Phoenix, San Francisco and New York City. In her free time she enjoys surfing, traveling, music, yoga, and cooking. She currently resides in a village on the southwest coast of Portugal.