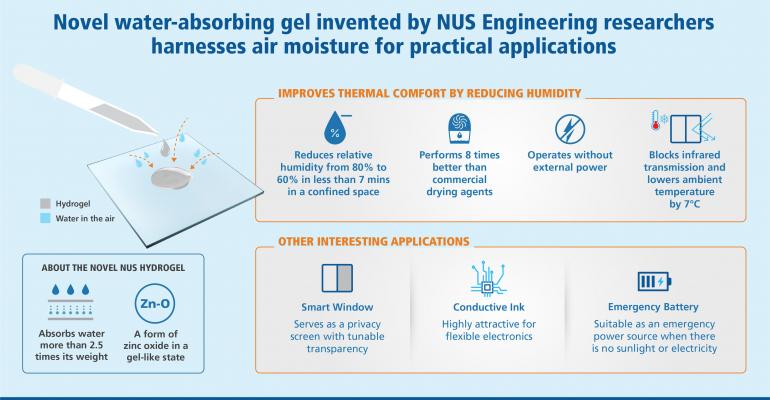 The new hydrogel is a form of zinc oxide that can absorb more than 2.5 times its weight in water, performing eight times better than commercial drying agents in tests.

The term “hydrogel” was first coined in 1896 to describe hydrophilic materials made of a network of polymers that can absorb and contain large amounts of water. Hydrogel materials are commonly used in contact lenses, packaging, wound dressing (to keep moisture out), and personal care products (think diapers and incontinence undergarments). More recently, hydrogels have been used for biomedical applications like tissue engineering and drug delivery. While hydrogels are widely used across many applications, their ability to absorb water from surrounding air hasn’t been well explored in research.

Recently, however, a team of scientists from the National University of Singapore (NUS) developed a moisture-scavenging material that can absorb about 230 percent of its weight in water from humid environments. The gel, which has been patented by NUS, is capable of humidity-triggered changes that bring into play optical, electrical, and electrochemical properties that can be exploited for a wide range of applications. These include thermo-hygroscopic windows, infrared radiation (IR) blocking windscreens, and even the creation of electrochemical cells for energy harvesting. The new gel can also serve as an effective conducting medium in flexible electronic substrates, enabling the reusability of printed circuit boards and mitigating the volume of solid electronic waste and the energy required for their disposal.

The new hydrogel is a form of zinc oxide—a compound found in sunscreen—that can absorb more than 2.5 times its weight in water from the surrounding environment. Testing has found that it can perform eight times better than commercial drying agents. NUS researchers say it’s suitable for both indoor and outdoor applications and is also relatively cheap and easy to produce.

The hydrogel can reduce relative humidity in a confined space from 60 to 80 percent—within the thermal comfort zone—in less than seven minutes. It makes sense that the gel was developed in Singapore, Tan Swee Ching, assistant professor in the materials science and engineering department at the NUS Faculty of Engineering, told Design News. “Singapore, like many tropical countries, experiences high levels of relative humidity between 70 to 80 percent,” he said. “In a humid environment, the air is saturated with water and, as a result, sweat on our bodies evaporates more slowly. This causes us to feel hotter than the actual ambient temperature, leading to discomfort. Our novel hydrogel aims to achieve a cooling effect by removing moisture from ambient air very efficiently.”

In addition to absorbing more water—about eight times more—than silica gel or calcium chloride, the hydrogel works faster and uses less material. “Less material” makes it more environmental friendly. And unlike energy-intensive dehumidifying and air-conditioning systems, this hydrogel doesn’t require electricity to operate. It can be easily coated onto walls, windows, and even decorative items to help dehumidify a room.

“We set out to develop a super-hygroscopic material that’s able to absorb moisture from the air to reduce relative humidity,” said Professor Ching. “We didn’t specifically look at developing it as a gel-like material. We thought it could be in powder form.”

With the new hydrogel (compared to old standbys like silica gel and calcium chloride), water can be released at a much lower temperature, making it easier for the material to be used repeatedly. This means that the cost of production is comparable to those materials, as well, and less of it is required.

“By coating our hydrogel on half a wall of a room, it can potentially reduce relative humidity by 20 percent,” Professor Ching told Design News. “A great amount of material would be required to achieve the same effect with a conventional material like calcium chloride or silica gel.”

In a manufacturing environment, the new hydrogel could be used as a drying agent coating material, and the applications for electronics are compelling. “Moisture in the air is a key factor affecting the reliability of electronic components,” said Professor Ching. “Our hydrogel can help in preventing electronic system failure.”

The duration of the hydrogel’s effectiveness depends on the humidity of the environment. If the relative humidity in the air is very high, it will reach its saturation point earlier than in a lower humidity environment. After the hydrogel is fully absorbed with water, heat will cause the water to evaporate, enabling the novel material to be reused again.

The group’s research paper, “A super hygroscopic hydrogel for harnessing ambient humidity for energy conservation and harvesting,” was reported in the journal Energy & Environmental Science.