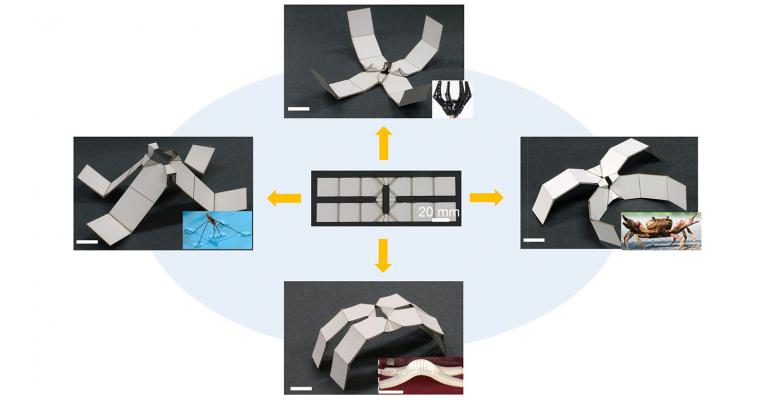 Kirigami inspired researchers at North Carolina State University to design the thin sheets of a new material that can transform from 2D shapes to 3D structures.

Dynamic materials that can autonomously move and assemble into different shapes are the way forward for materials science researchers who already have invented a number of novel materials with these characteristics.

Kirigami techniques have inspired a research team at North Carolina State University to develop thin sheets of material that can automatically turn themselves into 2D shapes and 3D structures in response to stimuli from the environment. Like the more popularly known origami, kirigami is a Japanese paper art form in which a single piece of paper is cut and folded to create new shapes and structures.

Specifically, the team led by Jie Yin, an assistant professor of mechanical and aerospace engineering at the university created a variety of robots from the material that can transform from 2D kirigami patterns into 3D structures without mechanical input. “Instead, we apply energy in the form of heat, and the material rearranges itself,” said Yin, adding that the materials represent a first for this type of behavior.

Researchers published a video online on YouTube showing how the kirigami-inspired robots work. The concept, which researchers call “active kirigami,” uses a three-layered material comprised of two layers that don’t respond to heat in addition to a polymer layer in the middle that contracts in response to heat.

The team used two ways to control the shape and structure of the material, researchers said. One is that that they created through-cuts that penetrated all three layers of the material, controlling its range of motion.

The other control method is through etchings that penetrate the outer layers and expose the heat-responsive polymer, researchers said. These etchings control the angle and direction at which the material folds, as well as how far it folds, they said. This results in the through-cuts opening as the material folds, which shifts the shape of the sheets into 2D or 3D designs, according to Yin.

“We can make a 2D template with the same pattern of through-cuts and use it to create many different 3D structures by making slight changes in the etching,” said Yin. “This effectively makes the active kirigami sheets programmable.”

Researchers demonstrated how the materials work by creating several thermo-responsive kirigami machines in various forms. These machines include simple robotic gripping devices and self-folding boxes, they.

The team also created a more complex device showing a greater range of the material’s ability to move and assemble autonomously in the form of a soft robot with a kirigami body and pneumatic legs. By switching the orientation of the body, researchers demonstrated how they could rapidly reposition the legs, changing the robot’s direction of movement, they said.

The proof-of-concepts show that the researchers’ work has the potential to be applied to other materials in additions to the ones they used, Yin said. “We used a temperature-responsive polymer for this work, but there’s no reason to think that other stimuli-responsive polymer materials like photoactive liquid crystals--wouldn’t work as well.”

The team posted a video of the proof-of-concept machines on YouTube. Researchers plan to continue their work to explore the potential range of applications for the programmable, active kirigami materials they developed.