Researchers have identified the pigments on the skin of squid and other cephalopods, work that could affect future development of materials.

Researchers at the University of New Hampshire have identified the pigments that are responsible for the broad range of colors displayed on the skin of cephalopods like squid, cuttlefish, and octopi, work that could have implications for the future development of materials and textiles.

A team led by Leila Deravi, an assistant professor of chemistry and materials research, discovered the molecular mechanism that causes cephalopods to alter their presence and provide camouflage in response to environmental and predatory cues. They hope eventually to duplicate the process for use in textiles such as camouflage, paints, cosmetics and other products used to disguise appearance, she said, a method known as biomimicry, which uses inspiration from nature to inspire design.

“This is a really exciting finding. It allows us to better understand just how sophisticated and intricately wired these animals are, even on the molecular level,” Deravi said. “One of the most basic components of coloration is the pigment, but we learned that even the pigment itself can aggregate into different forms to give a broad range of color.” 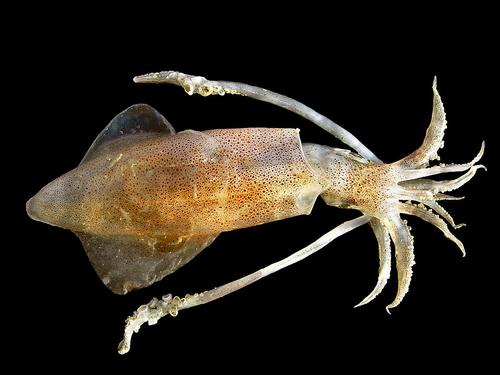 Researchers at the University of New Hampshire have identified the pigments that contribute to the broad range of colors displayed on the skin of cephalopods like the squid (shown). Researchers hope to duplicate the process for future use in materials and textiles such as camouflage, paints, cosmetics and other products used to disguise appearance.
(Source: Wikipedia)

Ultimately, researchers want to achieve the ability to design systems that can behave like cephalopods and actually sense environmental conditions so they can adapt to them in the appropriate way, either by camouflage or to stand out, Deravi said. Learning the composition of the pigments the creatures use allows researchers to “begin to think about integrating them into materials that are capable of these tasks,” she said.

The team published a study of their work, which focused on the squid Doryteuthis pealeii, available easily off the coast of New England, in the journal Langmuir.

What researchers discovered as they studied the animals is that thousands of color-changing organs, called chromatophores, are located on the skin of cephalopods. Squid have a smaller number of these organs compared to cuttlefish and octopus, but their chromatophores are larger. A network of nanostructured pigmented granules fill the organs, anchored by muscle fibers.

Those muscle fibers are key to creating the skin coloration, researchers found. When they contract, they cause the chromatophores to expand and distribute the pigmented granules. This process occurs over multiple chromatophores to change a creature’s entire color.

While researchers in the past had suggested that this is how the coloration of cephalopod skin occurs, the work of Deravi and her team has for the first time analytically verified it, according to researchers.

The next steps of the research will be to understand the purpose of the different pigments and why they are localized specifically within the nanostructured granules in the chromatophore, according to researchers. This is necessary in order to match the animals’ speed and dynamic range of the color-changing abilities and be able to one day apply them to textiles and materials, they said.