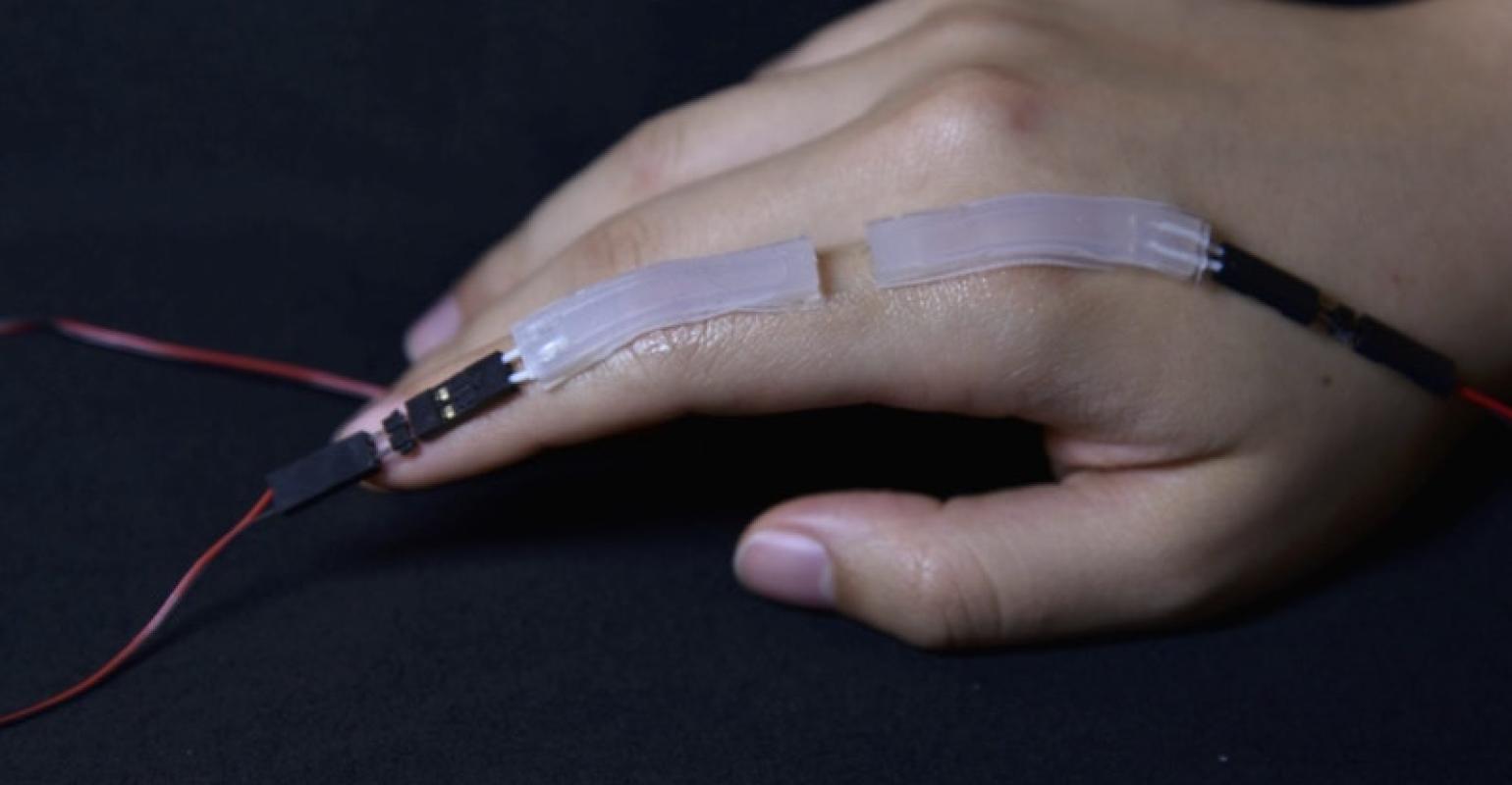 Researchers have been working to develop medical monitoring devices that are less obtrusive and more user-friendly for patients, especially children, who have little patience or even too sensitive to use bulky, uncomfortable devices.

Now researchers, including a team at Harvard University, have developed a non-toxic wearable sensor specifically designed to help monitor neuromotor and cognitive abilities in children born prematurely to ensure they are developing at a normal pace. With minimal intrusion, the sensor attaches to the hand and measures the force of a grasp and the motion of the hand and fingers, sending data to researchers in a timely fashion.

The sensor—a collaboration between researchers from Harvard’s Wyss Institute for Biologically Inspired Engineering, The Harvard John A. Paulson School of Engineering and Applied Sciences (SEAS), Beth Israel Deaconess Medical Center, and Boston Children’s Hospital—also could a range of other applications for therapeutic purposes, as well as be used in virtual-reality applications, researchers said in a news release.

The soft sensor is attached to the top and tip of the index finger to detect the movements, strain, and force of the finger while performing different activities, such as flexing and extending the finger and picking up weights and boxes, helping professionals monitor these movements.

“We often see that children who are born early or who have been diagnosed with early developmental disorders have highly sensitive skin,” explained Eugene Goldfield, associate faculty member of the Wyss Institute at Harvard. “By sticking to the top of the finger, this device gives accurate information while getting around the sensitively of the child’s hand.” Goldfield also is an associate professor in the Program in Behavioral Sciences at Boston Children’s Hospital and Harvard Medical School.

How the sensor works is that after a short mixing period, the glycerol breaks the crystal structure of potassium iodide and forms potassium and iodide ions, making the liquid conductive. Due to glycerol’s having a lower evaporation rate than water, and the solubility of potassium iodide, the liquid is both stable across a range of temperatures and humidity levels, in addition to being highly conductive, according to researchers.

“Previous biocompatible soft sensors have been made using sodium chloride-glycerol solutions but these solutions have low conductivities, which makes the sensor data very noisy, and it also takes about 10 hours to prepare,” said Siyi Xu, a graduate student at SEAS.

The team’s sensor has shortened that time down to about 20 minutes with more accurate results, she said. “It is four times more conductive than previous biocompatible solutions, leading to cleaner, less noisy data,” Xu said. Researchers published a study describing their work in the journal Advanced Functional Materials.

The team specifically designed the sensor with the comfort of children in mind. Usually such sensors use a bulky glove that children might not want to wear; the team’s design sits on top of the finger and on the finger pad, instead.

Using the sensor, researchers could use early detection to spot signs of cerebral palsy and other neuromotor and cognitive development disabilities in premature babies susceptible to these disabilities, they said.

So far researchers have only tested the sensor on adult hands, but plan to scale down the device to test them with children soon, they said.