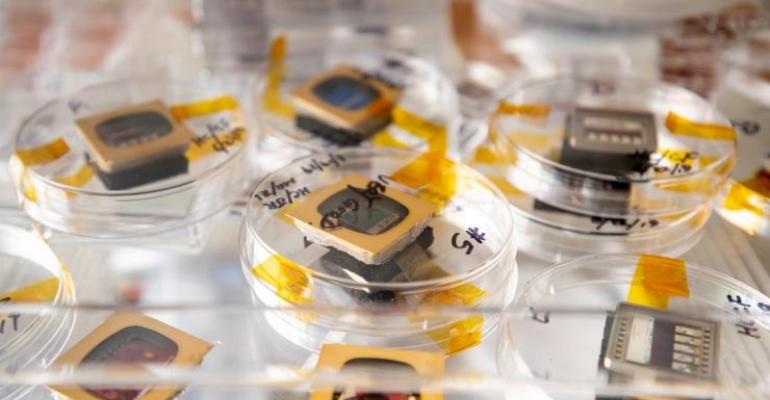 Researchers are breathing new life into outdated solar technology that is remarkably durable and affordable but historically could barely generate electricity.  That latter scenario was the case until now, as a shift in the underlying chemistry of the material—called fullerene previously but now transitioned into a material called “non-fullerene acceptors” (NFAs)—has boosted power output.

Researchers at the Georgia Institute of Technology (Georgia Tech) have created this material shift from fullerene to NFAs—with the acceptor in this case being a molecule with potential to catch electrons in photovoltaic electricity generation.

In this new chemistry, developed by a team led by chemist Jean-Luc Bredas, corresponding donor molecules “pitch”--similarly to the action in the sport baseball--electrons to acceptor “catchers,” and in this way create electric current. “NFAs are complex beasts and do things that current silicon solar technology does not,” said Bredas, a regents professor in Georgia Tech’s School of Chemistry and Biochemistry. “You can shape them, make them semi-transparent or colored. But their big potential is in the possibility of fine-tuning how they free up and move electrons to generate electricity.”

Fullerenes are pure carbon molecules with rather uniform and geometric structures of repeating pentagonal or hexagonal elements. Examples of fullerenes—named after architect Buckminster Fuller, who won fame for designing geodesic domes—include nanotubes, graphene, and soot.

In contrast to non-fullerenes, fullerenes are more ridged in molecular structure and tunability, while the former are more freely designed to be floppy and bendable. NFA-based donors and acceptors, then, can wrap around each other in precise ways, affording them advantages beyond mere electron donating and accepting--such as better molecular packing in a material. “Another point is how the acceptor molecules are connected to each other so that the accepted electron has a conductive path to an electrode,” said Bredas. “And it goes for the donors, too.”

This new material scenario bodes well for solar-energy production, researchers said. As in any solar cell, conduction electrons need a way out of the photovoltaic material into an electrode, while also needing a return path to the opposite electrode for arriving electrons to fill holes that departing electrons left behind.

In just the last four years, tuning NFA chemistry has boosted organic photovoltaic technology from initially converting only 1 percent of sunlight into electricity to 18-percent conversion in recent experiments. By comparison, high-quality silicon solar modules have about a 20-percent conversion rate.

Moreover, researchers believe they should achieve more than 25-percent conversion with organic NFA-based solar if we can control energy loss through material morphology.

Indeed, morphology—or the shapes molecules take in a material--is key to how researchers boosted NFA solar technology’s efficiency, something that on a molecular level has been a mystery until now. The Georgia Tech team carefully modeled tiny tweaks to molecular shapes and calculated corresponding energy conversion in a common NFA electron donor/acceptor pairing to achieve their results.

These tweaks that improve the performance of NFAs come from repositioning of material at the hypothetical “feet” of the electron catcher. Researchers discovered that some positions better aligned the “body” of the acceptor with that of the electron donor.

The team added a tiny component in the form of a methoxy group on the acceptor, and two positions out of four possible that the material took boosted the conversion of light into electricity from 6 percent to 12 percent.

The team published a study on their work, which was funded by the Office of Naval Research, in the journal Matter.

Researchers believe that marketable NFA-based solar cells potentially could have many advantages over silicon, not the least of which comes by reducing material and production costs. NFA-based solar cells also are light, flexible, and stress-resistant in comparison to heavy, stiff, and inflexible silicon cells, which is another benefit the new version of the old technology has.