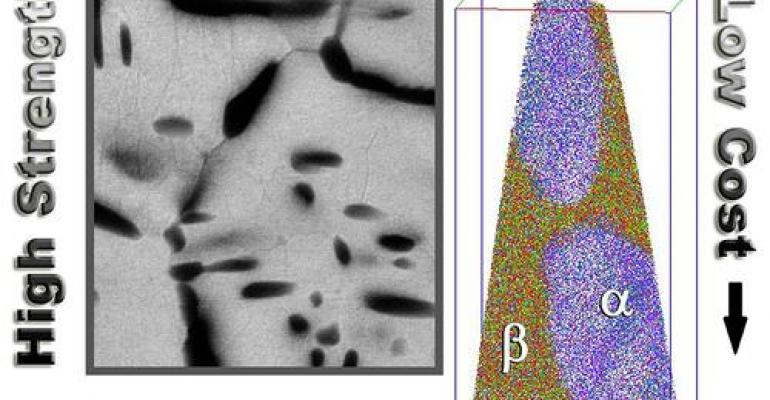 Given the urgent need for improved fuel economy in the transportation sector, there has been a renewed interest in titanium as a structural material. The fact that titanium is lightweight and corrosion resistant makes it an ideal choice for aviation, automotive, as well as biomedical applications. Studies by General Motors found that the use of titanium could lead to weight reductions of as much as 60% on a per component basis. Metallurgists have generally mixed titanium with other metals to produce alloys of higher strength. However, market penetration of titanium alloys has been limited due to their relatively high cost.

A recent breakthrough at the DOE’s Pacific Northwest National Laboratory (PNNL), has not only brought a low-cost titanium alloy closer to reality, but in the process has come up with the strongest titanium alloy made to date. 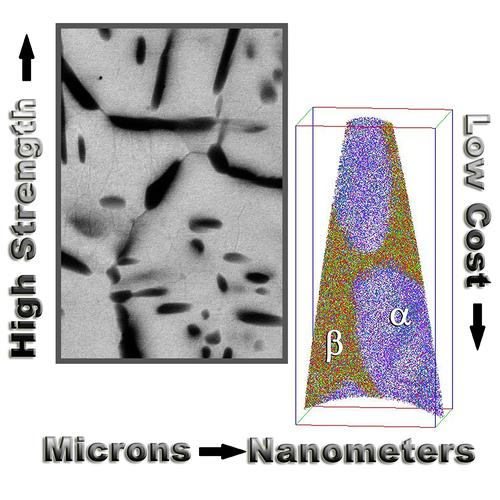 Working with engineers from ADMA (Advanced Materials), the team, led by Curt Lavender, combined a low-cost alloying process with a very strong alloy, Ti-185, which consists of titanium, vanadium (8%), iron (5%), and aluminum (1%). This alloy had been produced at laboratory scale 50 years ago, but had never been well-suited to volume production. The alloy also had exhibited defects known as beta flecks as the result of iron clumping.

According to Arun Deveraj, senior research scientist at PNNL, the low-cost process, which had been developed back in 2010 by Lavender and his team, was based on the use of titanium hydride (TiH2) powder instead of pure titanium. That study had previously shown that extrusions, direct press and sinter components, and rolled plate could be produced in this manner. This new process, using TiH2 powder, which cost $3/lb in comparison to conventional pure Ti powder as raw material costing $90/lb, resulted in large savings in the final alloy produced. The team found that this alloy not only lent itself well to the low-cost process, but also could be produced with improved strength. These improvements were achieved by controlling micro and nano structures within the material.

The process they used to increase the alloy’s strength was not unlike that used by blacksmiths 100 years ago. However, given the modern visualization techniques available, like electron microscopy and atom-probe tomography, they were able to see what was happening and to understand why, when produced with an experimentally derived heat-treating process, the result was an alloy with a tensile strength of approximately 1,700 MPa, or 10% to 15% stronger than previous versions, this new Ti-185 is the strongest titanium alloy ever produced. According to Vineet Joshi, a metallurgist at PNNL and co-author of the paper, "this alloy is still more expensive than steel but with its strength-to-cost ratio, it becomes much more affordable with greater potential for lightweight automotive applications."

A stronger titanium alloy, will require even less material, making the end product both lighter and less expensive than had previously been thought possible.

Using these high-tech visualization tools, the researchers discovered that the optimized heat-treating process created micron-sized and nano-sized precipitate regions -- known as the alpha phase, in a matrix called the beta phase -- each with high concentrations of certain elements.

"The aluminum and titanium atoms liked to be inside the nano-sized alpha phase precipitates, whereas vanadium and iron atoms preferred to move to the beta matrix phase," said Deveraj. "The atoms are arranged differently in these two areas. Treating the regions at higher temperature of a 1,450F before a 900F annealing achieved a unique hierarchical nano structure.”

Rather than cooking the alloy to the point where it became more homogeneous, the visualization enabled them to see that by removing the material from the heat and annealing it in a process they call “aging,” they would generate the required nano structure that made the material exceptionally strong.