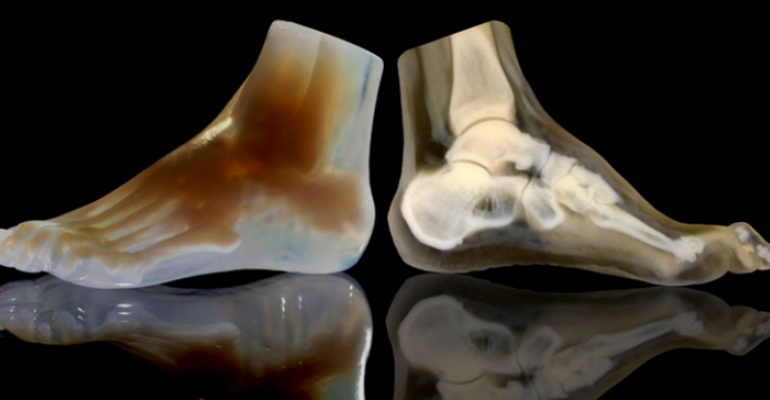 Researchers at MIT and Harvard have collaborated on a process for creating complex and accurate 3D models of the human brain and other organs, parts, and systems in the human body for enhanced patient data.

Inspired by his own medical situation, a researcher at MIT led a team that’s developed a new method for rapidly creating accurate 3D models of organs and systems in the human body for printing. Steven Keating had a baseball-sized tumor removed from his brain a couple of years ago while he was a graduate student in the MIT Media Lab’s Mediated Matter group. Inspired by the curiosity to see how his brain appeared before the tumor was removed—and to get a better grasp of his diagnosis and treatment—he collected his medical data and began 3D printing MRI and CT scans.

Faced with time and accuracy challenges, he sought collaborative help from some members of the Wyss Institute at Harvard University, who already were exploring a new method for 3D printing biological samples. Researchers there said they hadn’t considered using their approach for human anatomy until Keating reached out to them with his problem.

The result of the collaboration is a new technique that allows images from MRI, CT, and other medical scans to be easily and quickly converted into physical models with detail that is unprecedented in any other technology until now, researchers said. The research could make 3D printing more available to medical professionals as a tool of their trade, they stated in a Wyss Institute press release.

The technology “creates exquisitely detailed 3D-printed medical models with a fraction of the manual labor currently required, making 3D printing more accessible to the medical field as a tool for research and diagnosis,” explained Beth Ripley, a medical doctor and assistant professor of radiology at the University of Washington and clinical radiologist at the Seattle VA Medical Center, in the Wyss Institute press release. Ripley is a co-author on a paper the team published about its work in the journal 3D Printing and Additive Manufacturing.

MRIs and CT scans can produce high-resolution images, presenting them as a series of “slices” that reveal the details of structures inside the human body. In this way, they have become an integral part of physicians’ and other clinicians’ ability to evaluate and diagnose medical conditions.

However, there is a problem with providing so much detail, as it means that the subject or subjects of interest must be isolated from surrounding tissue and converted into surface meshes to be 3D printed. This is currently done with a time-intensive process called segmentation. A radiologist, for example, may have to manually trace the desired object on every single image slice, which can sometimes include hundreds of images for a single sample, researchers said in the release.

The process not only is time consuming, but also has issues of accuracy in the finished product, they said. In contrast, the new method developed by Keating and his collaborators offers a speedy and highly accurate method for converting complex images into a format that can be easily 3D printed.

Key to the new method is in printing with dithered bitmaps—a digital file format in which each pixel of a grayscale image is converted into a series of black and white pixels. In this image, the density of the black pixels is what defines the different shades of gray, rather than the pixels themselves varying in color.

By simplifying all pixels into a mixture of black or white, this format allows a 3D printer to print complex medical images using two different materials that preserve all variations of the original data with much greater accuracy and speed, researchers said.

Using this bitmap-based 3D printing, researchers created models of Keating’s brain and tumor. In doing so, they preserved all of the gradations of detail present in the raw MRI data down to a resolution similar to what the human eye can distinguish from about nine to 10 inches away, researchers said.

They also used the method to print a model of a human heart valve using different materials for the valve tissue versus the calcium deposits that had formed within the valve. According to the researchers, the result was a model that showed mechanical property gradients and provided new insights into the actual effects of the calcium deposits on valve function.

The team aims for its method to help make 3D printing a useful tool for routine exams and diagnoses, patient education, and to encourage a better understanding of the human body for both clinicians and patients. Currently, it’s too cost-prohibitive to segment image data sets for 3D printing—except in very high-risk or high-profile cases. But researchers are hoping that can change in the future, they said.

For Keating—who still 3D prints his MRI scans, both to track the healing of his skull post tumor removal and to watch for signs of cancer recurrence—the use of this method for future patients has become a personal crusade. He said he hopes the method will pave the way for better insight for patients, not just their physicians and caretakers, to learn about their own medical condition and how it can be treated.

“The ability to understand what’s happening inside of you, to actually hold it in your hands and see the effects of treatment, is incredibly empowering,” Keating said.