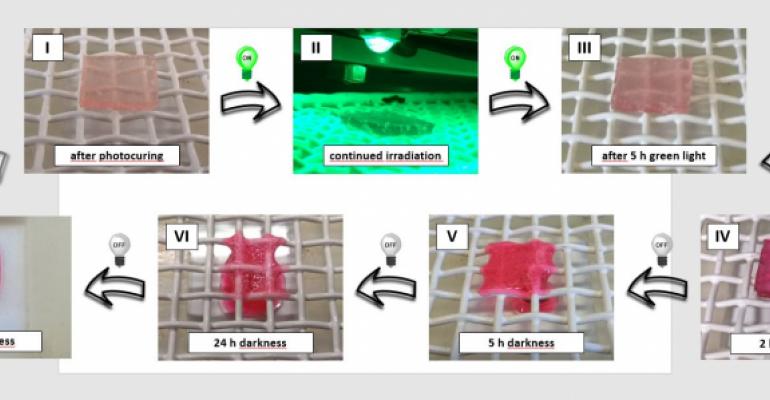 Researchers have developed what they hope will be a new class of synthetic materials with similar dynamic properties as those found in nature for myriad applications, including 3D printing, other types of manufacturing, and recycling.

A team from Queensland University of Technology (QUT) in Australia as well as Belgium’s Ghent University (UGent) and Germany’s Karlsruhe Institute of Technology (KIT) created the synthetic materials, which have reversible polymer properties in response to environmental stimuli—in this case, a green LED light and then darkness, researchers said.

While materials that respond to light already have been invented, researchers said what makes the materials his team developed different is that light is used as the trigger to stabilize, rather than destroy, chemical bonds. For this reason, the team came up with a new name for the materials—light-stabilized dynamic materials (LSDMs).

“We are hoping to introduce LSDMs as a whole new class of materials,” Hannes Houck, who worked on the research while completing a PhD at QUT, said in a press statement.

The Opposite of Normal Chemistry

Specifically, researchers created the material using naphthalenes—a chemical well known for its use in moth repellents--and the coupling molecules triazolinediones (TADs), they said.

The interaction between the material and the stimuli is the opposite of what normally happens in chemistry, which makes their work rather unique in terms of materials science, researchers said in paper published about the work in the Journal of the American Chemical Society.

“Typically, you use different wavelengths of light or additional heat or harsh chemicals to break up the polymer molecule chains that form a network structure,” researchers wrote.

In this case, however, the team used a green LED light to stabilize the network, and a “mild” trigger to break up the network, make it collapse, and flow away, the said—darkness. “Switch the light back on and the material re-hardens and retains its strength and stability,” researchers wrote.

“This is what you call an out-of-equilibrium chemical system,” researchers explained in the paper. “The constant energy of the green light keeps the chemical system in this bonded form, pushing it out of its equilibrium. Take away the light, and the system goes back to its relaxed, lowest energy state.”

Researchers said they could repeat the material’s switch from hard to pliable with the flick of a switch, and dimming the light could modulate the mechanical properties of the material.

Applications for the material include as a 3D-printing ink to print temporary, easy-to-remove support scaffolds, which would help enable the printing of free-hanging structures that is currently limited by the typical layer-by-layer fabrication process, researchers said.

“What you need to 3D print something like a bridge is a support scaffold, a second ink that provides that scaffold during printing of the design, but which you can later remove when it is no longer needed,” QUT macromolecular chemist and Professor Christopher Barner-Kowollik said in a press statement. “With a light-stabilized dynamic ink used as a scaffold you could 3D print under light, then switch the light off to let the scaffold ink flow away.”

Another potential use for LSDMs could be as a cell-biology study tool, with biologists using it as a cell surface support they could alter by light modulation without damaging the cells.