HomeMaterialsResearchers Develop Graphene from Carbon Dioxide
Recent
Materials
Novel 3D Printing Method Used to Replenish Coral Reefs
May 16, 2022
Volkswagen’s Electric Successor to the International Scout 4x4
May 16, 2022
The Music Is Over For Apple's iPod
May 16, 2022
Q&A With IndyCar Gearbox Expert Anna Chatten
May 13, 2022
POLL
Intel Unveils Trust Authority to Boost Security
May 13, 2022
Supplier News Looks at Highly Customizable Industrial Monitors
May 12, 2022
Here Technologies Maps are Key to Mercedes Level 3 Automation
May 12, 2022
'We Built the Domino's Pizza Tracker for Manufacturing'
May 12, 2022 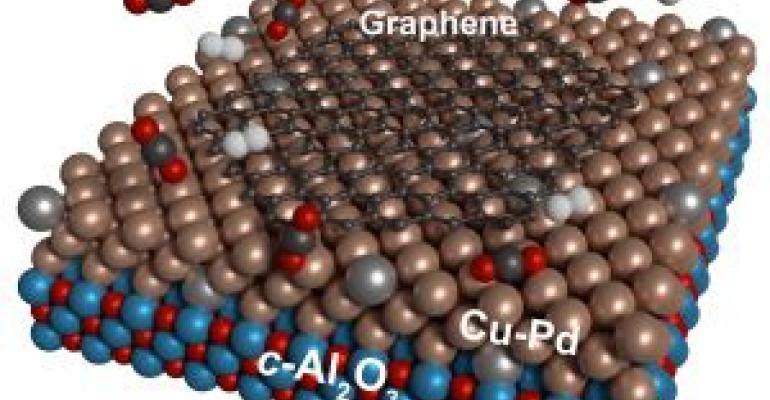 We’ve recently told you how researchers have found various new ways to synthesize graphene, including using bark from eucalyptus trees and a process based on bacteria.

Now scientists at Karlsruhe Institute of Technology (KIT) in Germany have invented a process to synthesize the highly conductive, useful material from a greenhouse gas—carbon dioxide.

The work proves that carbon dioxide, which has a harmful effect on the environment, can be a useful raw material, said Professor Mario Ruben, from KIT’s Institute of Nanotechnology (INT) and the Institute for Inorganic Chemistry (AOC), who led the study. Indeed, graphene is a two-dimensional form of carbon, and has many applications in electronics and materials science due to its high electrical conductivity, light weight, and high strength.

“This project endeavors to synthesize graphene, a promising material for future electronic and mechanical devices, from the ecologically problematic carbon dioxide by using it as starting material,” he explained to Design News.

The work serves a dual purpose, Ruben told us. It is a “tremendous gain” for emerging battery and quantum technologies, which use graphene components. It also can help mitigate the risk of uncontrolled climate change by using carbon dioxide in a useful way, he said.

Following the Lead of Plants

Specifically, researchers mimicked photosynthesis, a natural process plants use to turn carbon dioxide into oxygen. In this process, a metal-based enzyme Ribulose-1,5-bisphosphate carboxylase/oxygenase—simply known as RuBisCo--absorbs the carbon dioxide from the air and makes it available for further chemical reactions in the plant.

Inspired by this conversion, Ruben’s team developed a process in which carbon dioxide together with hydrogen gas is converted directly into graphene at temperatures of up to 1000 degrees Celsius using catalytically active metal surfaces that researchers prepared especially for the process, he said.

“If the metal surface exhibits the correct ratio of copper and palladium, the conversion of carbon dioxide to graphene will take place directly in a simple one-step process,” Ruben said in a press statement. Further, he told Design News, the team developed “an efficient protocol reintroducing carbon dioxide into the materials´ cycle by an added-value sequestration approach.”

Researchers published a paper describing their work in the journal ChemSusChem.

Quantum Computing and Beyond

KIT scientists achieved the production of graphene several layers thick, which could lead to carbon dioxide-based graphene being repurposed for use in batteries, electronic components, or filter materials, Ruben said.

“[Our work] will offer earlier entries of carbon dioxide-containing, climate-neutral products to the consumer market--in displays, touchscreens, batteries, carbon composite materials, water filters, etc.--which can act as technological carbon-sink  and from which we can expect to generate added-value,” he told Design News.

The team plans to continue its work to form functioning electronic components from the graphene it’s synthesized, with an eye toward next-generation quantum-computing technologies, he added. Quantum computers enable ultra-fast and energy-efficient calculations without need for the binary logic of current computational methods.