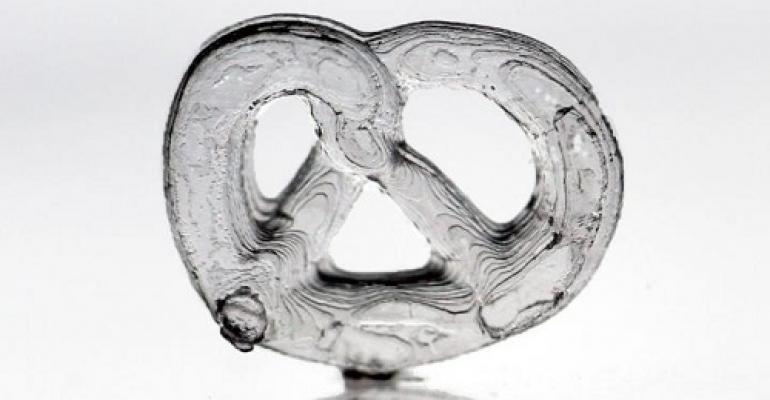 Move over plastic and metal—thanks to researchers in Germany, there’s a new material that can now used in a 3D printing process: glass.

A team at the Karlsruhe Institute of Technology (KIT) in Germany has developed a process that uses glass for additive-manufacturing techniques, adding the material that goes as far back as ancient Egypt and Rome to the list of materials possible for 3D printing, said Bastian Rapp, the mechanical engineer that led the effort.

“Glass is one of the oldest materials mankind has used,” he told Design News in an interview. “However, the 21st century revolution in manufacturing that began with the advent of 3D printing has so far not included glass.”

Their work—which uses stereolithography and a unique method leveraging both liquid and solid materials—changes that, Rapp said. “With our work, 3D printing of transparent glass is now possible,” he said. “This closes an important gap in the material palette of 3D printing.”

The team achieved their method by mixing nanoparticles of high-purity quartz glass and a small quantity of liquid polymer and then allowing this mixture to be cured by light at specific points by stereolithography. The material remains liquid and then is washed out in a solvent bath, leaving the desired cured structure. Then researchers heat the object, removing the polymer that’s still mixed in the glass.

“We designed a ‘liquid glass,’ which is a transparent liquid-glass nanocomposite which can be processed by state-of-the-art 3D printers,” Rapp explained. “Liquid glass is a mixture of glass nanoparticles suspended in a clear organic polymer that can be cured by exposure to liquid, thereby making the material accessible to 3D printing.”

Once cured, the nanocomposite can be thermally debound, removing the organic polymer that contained the glass, he said. “The remaining object can then be thermally sintered to a dense bulk piece of glass which retains the structure given during 3D printing,” Rapp said.

He and his team published a paper on their work—which has a number of commercial and practical applications--in the journal Nature.

The team is currently spinning off its technology—which can be used with any state-of-the-art stereo lithography 3D printer—to make it accessible commercially in a company called Vitrum3D, Rapp said. The first line of technology formed using the commercial Liquid Glass method will be released by the end of the year, he said.

Meanwhile, in the lab, researchers will continue research to extend the range of materials to include specific glass modifications that allow for manufacturing of colored glasses and glasses that can be sintered at lower temperatures, Rapp added.

Overall, the research will allow rapid prototyping of almost any shape or form in glass, Rapp said, paving the way for “countless applications” -- including lenses for cameras, highly thermally and chemically resistant microreactors, spectacles, and facade elements in architecture, he said.

3D-formed glass also can be used for data processing applications in next-generation computer technology to make small, complex structures out of a large number of very small optical components of different orientations, he added. Additionally, the material can be used in small analytical systems comprised of miniature glass tubes for biological and medical applications.