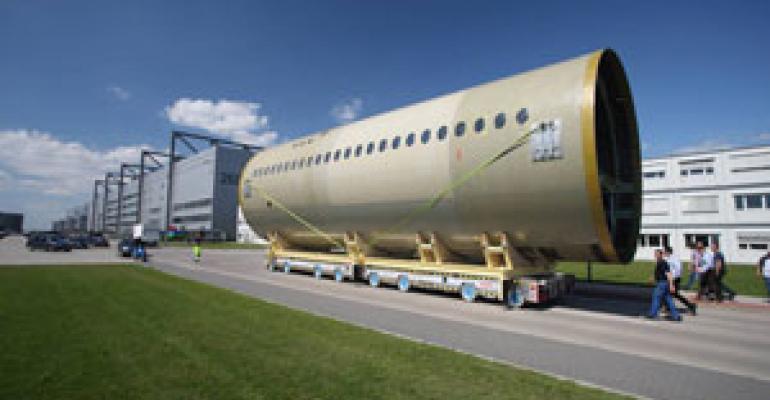 The Airbus XWB - now under production in Germany - will feature the largest integrated component ever to be built by Airbus from carbon fiber-reinforced plastic (CFRP).

"The A350 XWB sets new benchmarks for the aviation industry and passengers," says Airbus CEO Tom Enders. "Advanced materials make the new Airbus the most economical and environmentally friendly aircraft in its class."

The new design is the Airbus response to the tremendous reception to the composite-bodied Boeing 787 Dreamliner. Airbus claims that its version will be more fuel-efficient and will feature an operating cost that is up to 8 percent lower than the Boeing 787.

Automated tape-laying technology will be used for the first time for the carbon fiber, and for the lightning strike protection and fiberglass components. The wing shell will then be polymerized in an autoclave. Airbus says the high-tech oven is one of the largest facilities of its kind in the world and can accommodate two wing shells simultaneously.

In addition to laying the wing skin panels, the plant will also produce stringers, longitudinal stiffeners used in wing panels. For the first time, Airbus has set up a flow-line production system with an automated conveyor system that measures one-and-a-half football fields in length to produce these components.

Other production innovations at the Stade hanger include a new quality control system that permits inspection of the external and internal surfaces of CFRP components of that size simultaneously. Waterjet technology is used for edge trimming.

The XWB is also the first Airbus plane to use CFRP fuselage shells, which will also be built in the Stade facility. Slightly more than half (53 percent) of the airframe will be made of carbon fiber composites

About 100 employees will work in A350 XWB production by the end this year. Another 400 will be added when production reaches full capacity. Final assembly of the A350-900 is scheduled to start in 2011, with first delivery scheduled for 2013.

The Stade plant has a dedicated combined heat and power unit that generates electricity and heat for the hangars. Emissions are used as inert gas for the autoclave.

One important difference is that the Dreamliner is being built by a global supply chain, while critical CFRP components of the A350 XWB are built primarily in Germany and the UK. The extended supply chain for the 787 is being blamed for some of its extensive delays. In a nod to the tremendous potential of the Chinese market, Airbus announced that two Chinese manufacturers will supply 5 percent of the parts the A350 aircraft,

Airbus has contracted with BMW to develop an interior concept for the A350.
TAGS: Aerospace
0 comments
Hide comments
Related