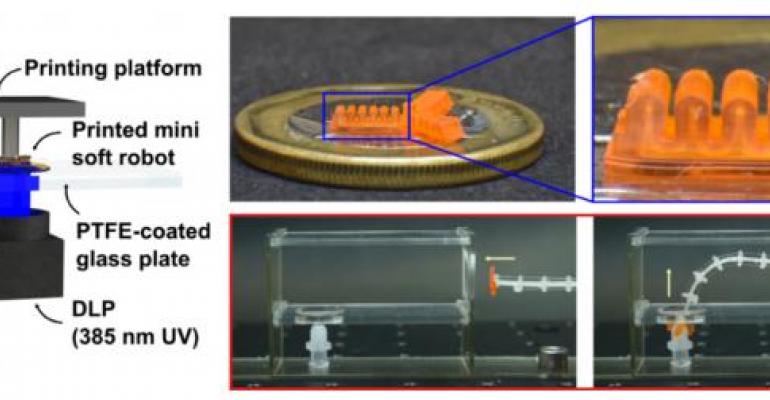 Scientists have a growing interest in the design of soft robots that are safer and more nimble than their rigid counterparts.

One area in which they’ve been challenged in the development of these robots is at the smaller scale, such as in the millimeter range, because of the complexity of fabricating such fine parts at this size.

Now a team of researchers from Singapore and China have combined efforts to develop a 3D-printing process using digital light projection (DLP) to develop pneumatic actuators for soft robots ranging in size from 2 millimeters to 15 millimeters, with a feature size of 150-350 micrometers, they said.

The method paves the way for easier fabrication of tiny soft robots well-suited for navigation in confined areas as well as the manipulation of small objects, researchers said. These robots could find use in various applications, from medical technology to jet maintenance.

The method offers an alternative to the molding and soft-lithography methods that are typically used and require great delicacy, thus are more complex, said Associate Professor Qi (Kevin) Ge from SUSTech, the lead researcher of the research project.

"To ensure reliable printing fidelity and mechanical performance in the printed products, we introduced a new paradigm for systematic and efficient tailoring of the material formulation and key processing parameters,” he said in a press statement.

DLP 3D printing is a process in which photo-absorbers are commonly added into polymer solutions to enhance printing resolutions in both horizontal and vertical directions. However, if the dose of those absorbers is too high, it can lead to rapid degradation in the material's elasticity, an aspect that’s critical for soft robots to sustain large deformations, researchers said.

To achieve their results and not sacrifice any durability in potential soft robots fabricated using the process, researchers made a number of informed decisions, said Yuan-Fang Zhang, a researchers from SUTD who worked on the project.

First the team selected a photo-absorber with good absorbance at the wavelength of the projected UV light and then conducted mechanical performance tests to determine the appropriate material formulation, he said.

“Next, we characterized the curing depth and XY fidelity to identify the suitable combination of exposure time and sliced layer thickness," Zhang said in a press statement.

Moreover, the method should be compatible with commercial stereolithography (SLA) or DLP 3D printers without needing to make any hardware modifications, Ge said in a press statement.

Researchers published a paper on their report in the journal Advanced Materials Technologies.

To demonstrate the usefulness of their process, the team devised a soft robot as a proof-of-concept—a debris remover comprised of a continuum manipulator and a 3D-printed miniature soft pneumatic gripper, they said. The robot can navigate through a confined space as well as collect small objects in places that humans might have a difficult time reaching, researchers said.