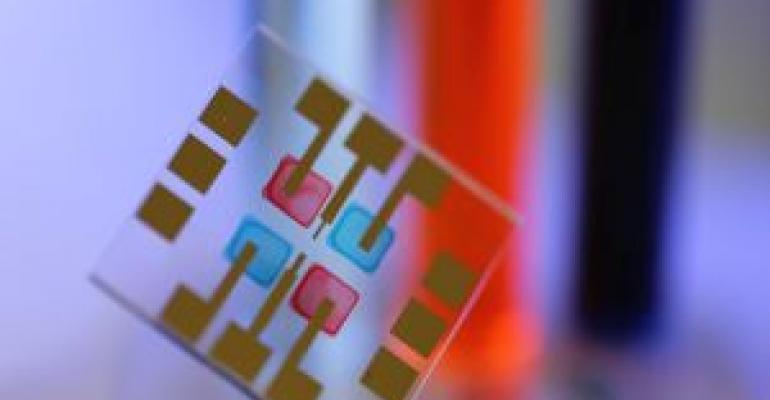 Researchers in Germany have developed semiconductor ink and an inkjet printing process for optoelectronic devices.

Researchers have made a breakthrough in the fabrication of light sensors that can see color could have implications for the technologies used to transmit data and perform other functions in the future.

A team at the Karlsruhe Institute of Technology (KIT) in Germany has developed a technique for printing wavelength-sensitive light detectors using the same technology that prints ink on paper. The technique—which uses a novel semiconductor ink invented by the team--can scale from small to large form factors.

The research provides an easier way to print high-tech optoelectronic devices that can be used in novel applications, said Gerado Hernandez-Sosa, one of the researchers on the project. The inkjet printing technique researchers developed deals with light detection, something “every person is in contact with in everyday life,” he told Design News.

“When we take pictures with our camera, when we hold the door of an elevator or when we measure our heartrate with a smart watch,” Hernandez-Sosa told us. “Often the detectors are hidden, but they are crucial elements.”

Upcoming technologies will increase the demand for optical sensors for a variety of applications including visible light communication (VLC), which uses indoor lightning in buildings for optical communication and could be the future of how data also is transmitted, he said.

“It offers a number of advantages compared to current technologies like Wi-Fi or Bluetooth in terms of security, speed, and accessability,” Hernandez-Sosa told Design News. “Our research contributes to this technology by exploiting the advantages of a special kind of materials (organic semiconductors) and their fabrication with printing techniques.”

The technique researchers developed could be the answer to simplifying printing processes for the fabrication of photodetectors, which change their conductivity when exposed to light.

“In our case we use organic semiconductors in the ink that will be printed to form the light sensitive layer of the photodetector,” he told Design News. “Depending on the material that is used the detector will react in different magnitude to the color of the light. However, when changing the organic material composition one would also change the fabrication process which is many times complicated.”

The KIT research team now has developed an ink formulation that allows for the printing of photodetectors with different color selectivity by changing only one component, he explained.

“However,  when exchanging this material we managed to keep the properties of the ink constant,” he told Design News. “This enabled us to print photodetectors that react to different colors using the same printing ‘recipe.’”

The team believes their research can be useful for the development of next-generation of solar cells, Hernandez-Sosa told Design News. Researchers plan to continue to work on their approach with an aim to find more material or material combinations that react more prescicely to different colors or that can distinguish smaller color differences. “We also aim to] fabricate light detectors that can work at higher speeds and could enable optical communication,” he added.