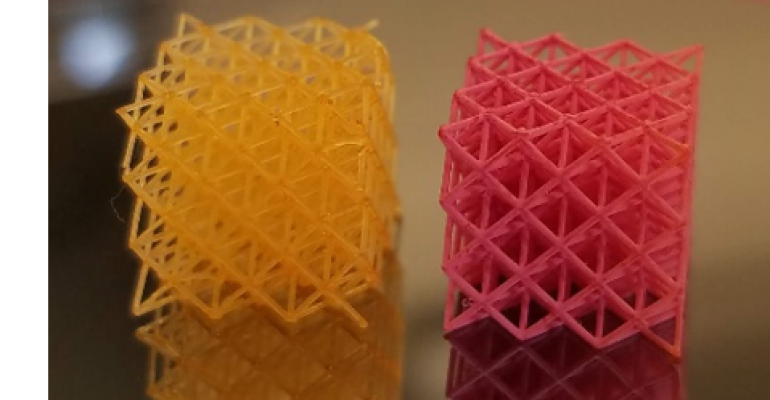 There has been a lot of progress in 3D printing, but one area that still needs modernization in terms of cost and efficiency is how to paint complex 3D printed objects.

Researchers at Rutgers University believe they can advance this endeavor with a new way to paint objects, such as lightweight frames for aircraft and biomedical stents, that could help save manufacturers of these products time and money.

The method—which researchers said is more efficient than using conventional sprays and brushes—also paves the way for the design of so-called “smart skins” for printed parts that can be duplicated and mass produced, said Jonathan Singer, an assistant professor in the Department of Mechanical and Aerospace Engineering at Rutgers.

“Our technique is a more efficient way to coat not only conventional objects, but even hydrogel soft robots, and our coatings are robust enough to survive complete immersion in water and repeated swelling and de-swelling by humidity,” he said in a press statement.

Typically, complex 3D printed parts that are starting to be used across various industries are painted using sprays or brushes, which can’t always reach every corner of the object and can leave some surfaces exposed.

The method developed by the Rutgers team not only solves this issue but also fosters rapid prototyping of the parts because it can be applied using an accessory to 3D printers, Singer said.

The technology works by creating a fine spray of droplets that apply a voltage to fluid flowing through a nozzle—a technique called electrospray deposition that has been used mainly in analytical chemistry. However, it also has been used in lab demos in coatings that deliver vaccines, light-absorbing layers of solar cells, and fluorescent quantum dots for LED displays.

The approach and related accessory allows 3D printed parts to be automatically coated with layers of paint for functional, protective, or aesthetic purposes.

There are some benefits to their technique over current strategies, researchers noted. One is that the paint is more targeted, making for more accurate coverage on the object. It also uses a thinner paint application, meaning it uses significantly fewer materials than traditional methods.

The latter benefit allows for the use of emerging materials, such as nanoparticles and bioactive ingredients, which improve the process but would otherwise be too costly in paints, Singer added.

Researchers published a paper on their work in the ACS journal Applied Materials and Interfaces.

The team plans to continue its work to encompass the creation of surfaces that can change their properties or trigger chemical reactions, as well as to create paints that can sense their environment and report stimuli to onboard electronics. They hope to one day commercialize their invention.