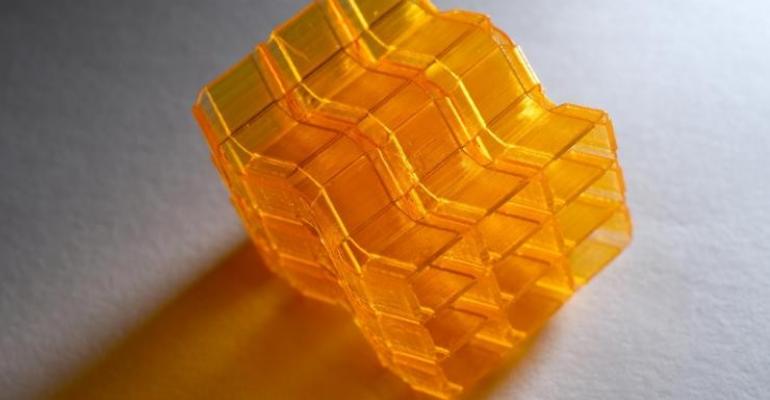 Researchers at Georgia Tech have developed a 3D-printing method for fabricating complex origami shapes in an unprecedented, one-step process.

Researchers already have used inspiration from the Japanese paper art of origami to create new designs in batteries and self-actuation. Now, a team from Georgia Institute of Technology has merged this art with 3D printing in the development of a one-step approach to fabricating complex structures.

Typically, to fabricate origami structures using 3D printing, a process would require multiple steps, more than one material, and assembly of the final part from smaller parts, said Glaucio Paulino, the chair of Georgia Tech’s School of Civil and Environmental Engineering, in a Georgia Tech news release.

Now, he and his team have taken these complexities out of the process using a new kind of 3D printing called digital light processing (DLP), which creates structures by printing successive layers of a liquid resin that is then cured, or hardened, by ultraviolet light.  “What we have here is the proof of concept of an integrated system for manufacturing complex origami,” Paulino said. It has tremendous potential applications, from biomedical devices to equipment used in space exploration, he added.

The process the team developed results in origami structures that are not only capable of holding significant weight, but can also be folded and refolded repeatedly in an action similar to the slow push and pull of an accordion, researchers said.

An Evolution from Zippered Tubes

Paulino first reported the design of these structures, which he called “zippered tubes,” in 2015. However, they were made of paper and required gluing. The current work is an evolution of this research, with the development of zippered tubes composed of polymer that do not require assembly, he said.

To achieve the current results, researchers knew they needed a material that was not only soft, but could be folded hundreds of times without breaking. They developed a new resin that had these properties, exhibiting significant strength after curing. Moreover, the resin played a key role in the fabrication of tiny hinges that are present along the creases where the origami structure folds. These hinges—made of a thinner layer of resin than the object’s larger panels—allow for this multiple-folding capability, researchers said.

The team used DLP to create several origami structures ranging from the individual origami cells that comprise zippered tubes to a complex bridge composed of many zippered tubes.  In tests, the objects demonstrated an ability to carry about 100 times the weight of the origami structure, as well as withstand repeated folding without breaking, said H. Jerry Qi, a faculty fellow at Georgia Tech’s School of Mechanical Engineering.

Moreover, they seem to hold up in terms of longevity as well. “I have a piece that I printed about six months ago that I demonstrate for people all the time, and it’s still fine,” Qi said.

The team plans to continue its work on different aspects of the process to improve it for the future. For his part, Qi is working to make the printing even easier while exploring ways to print materials with different properties, he said. Meanwhile, Paulino’s team recently created a new origami pattern on the computer that requires them to design a new system in order to “bring it to life,” he said.

Researchers published a paper detailing their work in the journal Soft Matter.