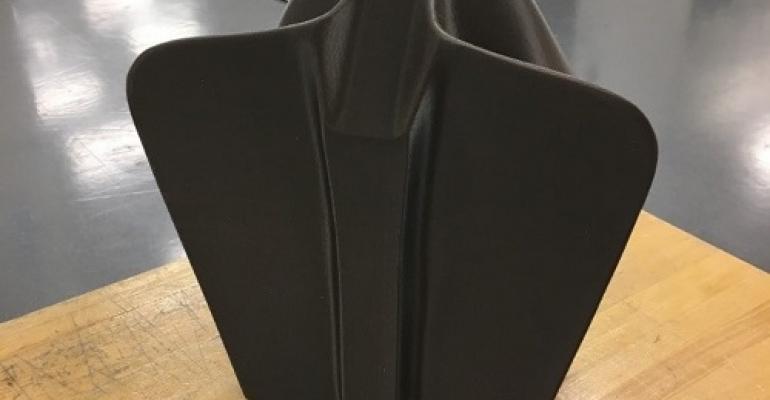 When the United States luge team had exceptionally unique needs, it turned to additive manufacturing and 3D printing.

Luge is the only sliding sport timed to one thousandth of a second. Milliseconds can make a difference between medaling and merely finishing in a sport that can reach speeds of 90 mph. The US luge team was seeking to build a better, faster sled, recalls David Dahl, Applications Engineer for Stratasys, and they wanted to do it in time for the 2018 Winter Olympics currently underway in Pyeongchang, South Korea.

“The luge team was walking past the booth and noticed that we had examples of 3D-printed composite mold tooling on display,” Dahl told Design News. “We began discussing the limitations with their current process and the need for customized sleds that could be manufactured very quickly. We decided the next step was to have their technical team visit our facility in Minneapolis to have a brainstorming session with our team of expert engineers to discuss what could be 3D printed.”

Interestingly, the US luge team makes their sleds in-house with layers of carbon fiber fabric and resin to make the composite sled. Current sled production is accomplished by traditional mold tooling, which is done by machining metal or shaping foam blocks to produce the carbon fiber composite parts for the sled. The most difficult component to make with traditional tooling methods is the racing team’s “doubles’ tower,” a composite structure located at the front of the sled that’s used to accurately position riders’ legs during a race. Proper athlete “fit” is critical for performance, but the component is extremely cumbersome to fabricate using traditional methods due to complex, trapped-tool geometry.

Stratasys suggested to the team that the company’s fused deposition modeling (FDM) technology could be used to 3D print the molds for sled creation. The speed of additive manufacturing would allow the team to quickly iterate on designs, customize the sled to the shape of the athlete, and test the designs on the track. In addition to enabling faster design and prototyping, the FDM technology could also be used to solve the problems of complex geometries and cavities that were plaguing the creation of many of the sled’s components, including the doubles’ tower.

“The mold tooling for the sled was printed with ASA thermoplastic,” Dahl told Design News. “The mold used to make the doubles’ tower was printed with ST-130, which is a Stratasys proprietary material that was developed specifically for sacrificial tooling such as this -- it can be dissolved (literally washed away) when placed in a water-detergent bath solution.”

In a prototype run with the Stratasys Fortus 900mc 3D printer, team designers were able to 3D print the mandrel, layup and cure the composite structure, and wash-out the tooling material – all in less than a week. With this success, the team used FDM technology to 3D print the entire sled body layup tool. The result was a more cost-effective method of building and testing customized racing sleds that could be tailored to each athlete’s body. Because the sled body layup tool created with FDM technology has a removable middle section, the new process allows for sleds to be tailored to each athlete, which in turn provides better comfort and increased aerodynamic efficiencies.

“Competitive luge racing is an extremely demanding sport where fractions of a second are the difference between winning and losing,” said USA Luge Technical Programs Manager Jon Owen. “Our riders depend on comfortable, aerodynamic sled designs to win races. In teaming with Stratasys, we’ve become much more competitive on the world stage – continuously adjusting designs and running them on the track much faster than traditional processes. Additionally, we’ve balanced both comfort and performance by tailoring the sled to each rider’s body, while minimizing fabrication cost and time.”

For the 2018 Winter Olympics, the doubles luge team of Andrew Sherk and Justin Krewson have been using a sled that was created using Stratasys’ FDM technology. Dahl says that composite tooling is an obvious first step, but that additive manufacturing has much more to offer the sport (as well as other sports). The luge team’s success with additive manufacturing for elite sports equipment will help spread the message that 3D printing is safe for critical equipment. (In other words, if you can trust it on an ice sled that carries humans at 90 mph, it’s safe for the power button on your new coffee pot design.) The next logical step is 3D printing the sleds themselves, which Stratasys and the US luge team say is a goal for the 2022 Winter Olympics in Beijing.

“We are already developing new ways to use 3D printing on and off the sled for future races,” Dahl told Design News. “Since making each mold for the sled is time- and cost-prohibitive and making changes can be even more difficult, most sleds have a generic shape. This isn’t ideal for a sport in which speed and control are the goals, since most human bodies do not have a generic shape, and one size doesn’t fit all.”

The Winter Olympic luge events took place from February 10th to 15, 2018. First-time Olympians Justin Krewson and Andrew Sherk placed eighth for the US in doubles luge with a combined time of 1:32:652, .955 seconds behind the gold medalists, Germany’s Tobias Wendl and Tobias Arlt. Chris Mazdzer of team USA won a silver medal in men's singles luge.