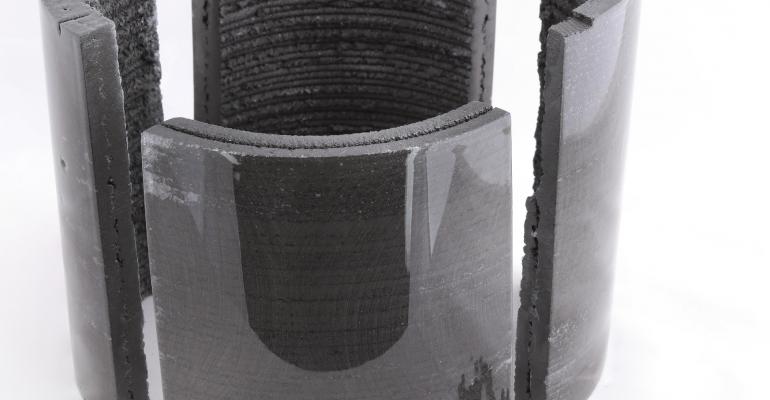 Today, magnets are increasingly critical components for modern electronics and devices. Cars might contain a hundred of them, distributed between the engine and the various small electric motors that run the windshield wipers and change the mirror angles. Magnets are also used in personal electronic devices, wind turbines, and other alternative energy equipment, medical imagine machines, and computer hard drives. These powerful commercial magnets often contain a collection of rare-earth minerals -- most notably neodymium and dysprosium -- which are expensive and increasingly difficult to obtain, as they are often mined in troubled regions outside the US.

Traditionally, bonded magnets are manufactured using an injection-molding process. Conventional sintered magnets often waste as much as 30% to 50% of raw materials, including rare-earth elements, in the tooling processes that follow the molding. As a result, additive manufacturing processes, or 3D printing, that cut down on waste would hold enormous promise for the production of commercial permanent magnets.

To create the magnets, the researchers used composite pellets consisting of 65 volume percent of isotropic NdFeB powder and 35% polyamide (nylon-12) as a binder. The pellets were melted, compounded, and extruded layer-by-layer at a rate of about one inch/minute by the BAAM into magnets in a variety of forms and sizes.

The result was a bonded magnet with comparable or better magnetic, mechanical, and microstructural properties compared to bonded magnets made using traditional injection molding with the same composition. The additive process, which was conducted using CAD software, was able to capture and reuse the materials, resulting in nearly zero waste.

Designers & Innovators. Learn more about some of the latest designers and innovators and what they're up to at ESC Silicon Valley, Dec. 6-8, 2016 in San Jose, Calif. Register here for the event, hosted by Design News ’ parent company, UBM.

The new process not only conserves materials, including rare-earth minerals, but is also able to easily produce complex shapes, which is particularly useful for manufacturing prototypes or small production batches. The resulting magnets required no tooling and were produced in a process that was faster than traditional injection methods. Overall, magnets produced via this method could result in significant cost savings for manufacturers. This is particularly relevant for large manufacturers that may use dozens of different shaped magnets in their processes. Traditional injection molding would require the expense of creating a new mold and tools for each, but with additive manufacturing, the forms can be crafted simply and quickly using computer-assisted design.

Parans Paranthaman, principal investigator and a group leader of ORNL's Chemical Sciences Division, told Design News that the most compelling application of the 3D-printed magnets will be for motors and generators, which often require complex shapes.

“It is not possible to use sintered magnets with complex shapes in several motor designs,” he said.

In some cases, the magnets produced via the additive manufacturing process resulted in magnets of better quality than those produced by injection molding.

“Through the additive process, magnet polymer composite pellets are melted and forced through a nozzle,” Paranthaman explained. “During this process, some degree of magnet particle aligning is possible. Also, in the injection process, the material spends a longer time in the IM machine barrel, where it is subject to mechanical friction and stresses, which would degrade the magnetic properties.”

The researchers chose nylon as a binder for the 3D-printed magnets, as it’s widely used in commercial injection-molded magnets.

Going forward, the research team plans to experiment with different binders and processing temperatures and hopes to speed up the process, which could eventually be refined to print at a rate of one meter/second. The team also plans to experiment with creating sintered magnets using additive manufacturing processes, and will attempt to print anisotropic, or directional, bonded magnets, and apply these magnets in motors.

“In-situ alignment is the biggest challenge for printing anisotropic magnets,” said Paranthaman. “Aligning the particles during printing while maintaining the shape of the magnet is challenging.”

The results of the ORNL team’s research was published in the journal, Scientific Reports. Funding for the project was provided by the DOE’s Critical Materials Institute (CMI).