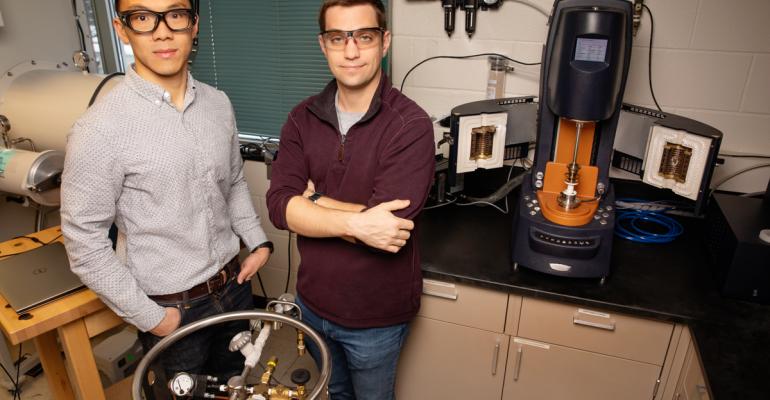 A solid electrolyte developed by researchers at the University of Illinois could solve some of the problems with lithium-ion batteries.

One of the big problems with current lithium-ion battery designs is that defects in the battery can cause electrical problems that lead to explosions and fires. Because of this, researchers have been trying to find ways to prevent these defects—called dendrites—from forming and also to help them repair themselves if they do form.

To the latter end, researchers at the University of Illinois have developed a new polymer-based solid electrolyte can do just that. The electrolyte—made of a solid polymer instead of a liquid material, which is currently typical of these types of batteries--can self-heal after damage.

Batteries designed using this electrolyte are more environmentally friendly, as the polymer can be recycled without having to use harsh chemicals or high temperatures. “Anytime you can make something heal itself, it means you don’t have to replace things as often which saves time, money, and energy,” Christopher Evans, a University of Illinois materials science and engineering professor who led the research, told Design News. “In batteries, failures tend to be catastrophic and the battery stops working entirely. Our goal was to be able to essentially restart the battery after it had stopped working."

Researchers for some time have been exploring the use of solid, ion-conducting polymers as an option for developing nonliquid electrolytes, said Brian Jing, a materials science and engineering graduate who worked with Evans on the research. However, high temperatures inside the battery tend to melt most polymers, which results in dendrite formation and potential battery failure, he said.

To solve this problem, researchers improved upon previous design by scientists that uses a network of polymer strands that are cross-linked to form a rubbery lithium conductor. This can delay the growth of dendrites, but the materials used are too complex to be recovered or healed after any damage.

The team addressed this issue by developing a network polymer electrolyte with a cross-link point that can swap polymer strands in exchange reactions, Evans said. In contrast to the previous efforts to use linear polymers, these networks actually get stiffer upon heating. “We designed a polymer network that is capable of reorganizing its components,” Evans explained to Design News. “It was made out of ethylene gycol and boric acid, materials that are abundant and cheap. The bonds that result can exchange with each other--for example one ethylene glycol chain can displace another one.”

This effect can potentially minimize the dendrite problem, as well as demonstrates that both conductivity and stiffness increase with heating, something not seen in conventional polymer electrolytes, Jing said.  The polymer strands also can break down easily and resolidify into a networked structure after damage, giving them their recyclable quality, as well as restore conductivity by self-healing, he added.

The team published a paper on its work in the Journal of the American Chemical Society.

Researchers tested the conductivity of the new material and found its potential as an effective battery electrolyte to be promising; however, they acknowledged that further research is required to make the electrolyte comparable in performance to the ones currently in use. Still, Evans said that while the material was designed for batteries specifically, it also “could be applied to any energy relevant system like fuel cells or supercapacitors where self-healing would be advantageous.”

The team plans to continue its work to test the electrolyte in various conditions and further assess its potential uses. “The next step is to explore new chemistries and bonds to see how they can handle wet environments or highly acidic/basic solutions to broaden the scope of applications,” said Evans.