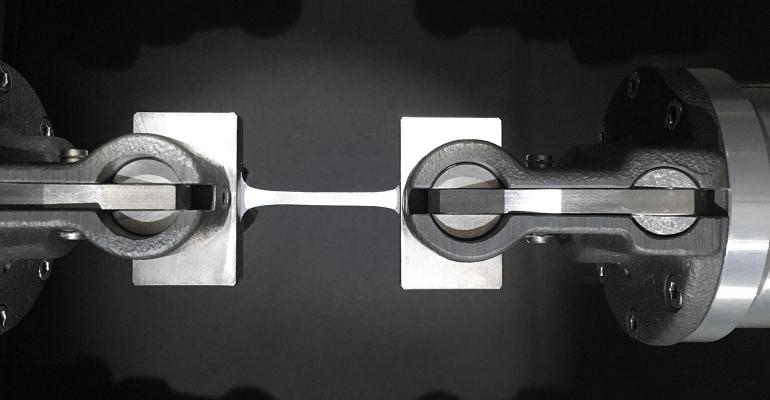 Researchers at Cornell developed a novel polymer for the commercial fishing industry to reduce marine pollution.

Discarded plastic waste that ends up in the ocean—where it is harmful to marine life and the health of the oceanic eco-system, in general—is a massive environmental problem that scientists have been trying to solve in various ways.

About half of this type of plastic pollution comes from commercial fishing gear in the form of the nets and ropes. To help address this problem, scientists at Cornell University have developed a new durable polymer for marine use that can degrade through exposure to ultraviolet radiation.

While some of the ways scientists have tried to solve the problem involves alternative materials, plastic itself, with its myriad uses, is not going anywhere soon, said Bryce Lipinski, the project’s lead researcher and a doctoral candidate in Cornell’s Department of Chemistry and Chemical Biology.

“The reality is that plastic is here to stay,” Lipinski, a researcher in the laboratory of Tisch University Professor Geoffrey Coates, told Design News. “There are numerous applications in which plastics out compete other materials in terms of strength, flexibility, and weight. The combination of mass utilization and insufficient disposal practices has led to significant plastic contamination of the environment.”

Rather than try to solve the problem as a whole, the Cornell team decided to focus on one of its many fronts.

“We targeted the need for a high-strength degradable polymer for applications in which plastic often escapes to the environment,” Lipinski told us.

Fishing nets and ropes are primarily made from three kinds of polymers—isotactic polypropylene, high-density polyethylene, and nylon-6,6—none of which easily degrade.

Coates and his research team have spent the past 15 years developing a plastic strong enough to meet the needs of the fishing industry, but that also could degrade in a reasonable time frame.

Researchers worked with a material called isotactic polypropylene oxide (iPPO), which was first discovered in 1949 and is structurally similar to isotactic polypropylene, one of the world’s most commonly produced polymers. However, the discovery of the mechanical strength and photodegradation of iPPO was unknown until the work of the Cornell team, Lipinski said.

What’s unique about the iPPO is the high isotacticity, or enchainment regularity, and polymer chain length of the material.

iPPO contains linkages with greater susceptibility to degradation by UV light. In lab tests researchers conducted, they observed “significant photodegradation” of the material in less than 30 days; however, the rate of degradation is light intensity-dependent, Lipinksi said.

Researchers published a paper detailing their new material in the Journal of the American Chemical Society.

Looking ahead, researchers hope to see iPPO being used in the form of nets, ropes, and lines for commercial fishing applications to help reduce the amount of plastic pollution in the world’s marine environments.

“Under the appropriate conditions, these materials should readily degrade in the environment if lost during their use,” Lipinksi told us.

For this to happen, researchers still need to perform additional studies on material performance as well as address synthetic challenges that will come when scaling production of iPPO, he added.

Researchers plan to continue their work to conduct additional degradation testing for potentially programming the lifetime of the plastic for its specific application, Lipinksi said.