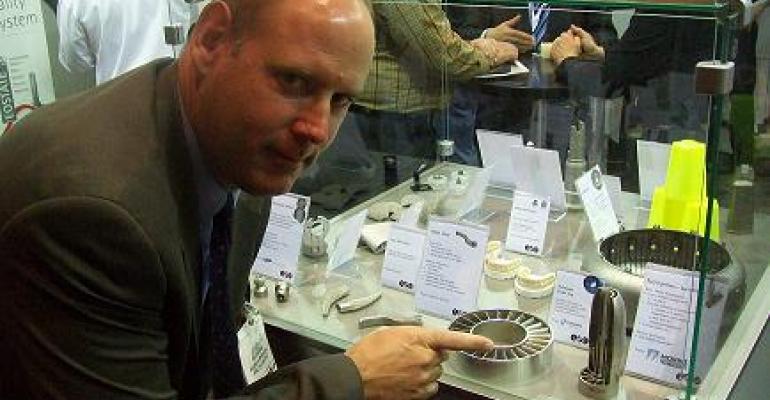 DSM Somos, a producer of materials for stereolithography systems, introduced Somos NeXt, which it described as the industry's most advanced resin to date for approaching engineering thermoplastic performance.

"This is a material you need to hold in your hand to fully appreciate," says Vince Adams, DSM Somos' marketing manager. "The stiffness/toughness combination produces a look and feel that is so like a thermoplastic, people are really surprised that it's actually stereolithography." DSM says the material has properties comparable to ABS. It has a notched Izod impact rating of 0.52 J/cm, almost double most of its other materials.

"The unique combination of mechanical properties is what gives SomosNeXt its key advantage compared with all previous SL resin options," says Adams. DSM Somos is an unincorporated subsidiary of DSM Desotech Inc.

EOS showed several new metals and plastics it has adapted for use in its laser-driven sintering systems, ranging from Titanium Ti64 to PEEK HP 3. Efforts are under way now to develop new metals for structural aircraft applications, including new nickel- and titanium-based alloys, says Andrew Snow, North American sales manager for EOS.

"Ultimately our goal is to optimize the build process and to have publishable properties that are superior to cast metals and approaching those of wrought metals," says Snow.

The new materials encompass the full Shore A hardness scale (from 27 to 95) that mimic elastomeric products. Target applications include wires and cables, grips and handles, plugs and connections, shock absorbers, function buttons, gaskets and seals, among other rubber applications. The new rigid materials simulate the strength and toughness of products made of standard plastics such as polypropylene, polyethylene, polyvinyl chloride and polystyrene. Up to 11 different rigid and flexible materials can be combined in a single part in one build.

David Reis, CEO of Objet Geometries, said: "The increased capabilities extend tremendous benefits, opening up the use of printed models for many more applications."