This New Material Thickens as it Stretches 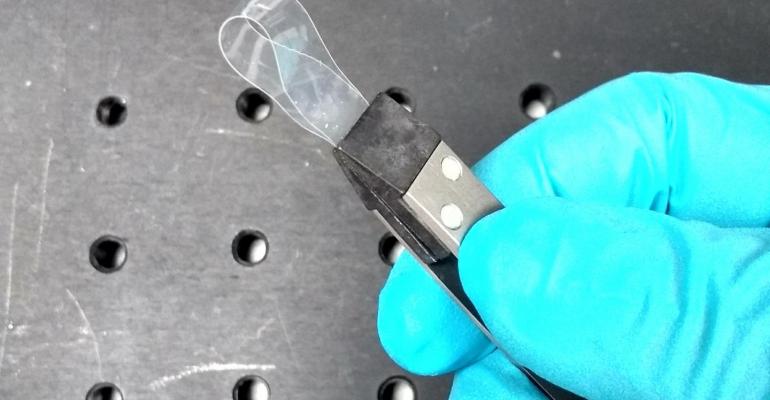 Researchers at the University of Leeds have developed a synthetic material that mimics certain biological tissues and thickens as it stretches.

Are you finding materials currently available too constrained and inflexible? Researchers at the University of Leeds in England have developed a material that gets thicker, rather than thinner, when stretched. Technically speaking, this material demonstrates a negative Poisson's ratio, which represents the ratio of transverse strain to axial strain.

“Initially when you stretch this material, if we stretch perpendicularly to the alignment direction of the liquid crystals, we initially see the sample get thinner, exhibiting normal positive Poisson ratio behavior, but then it passes a critical point where it goes sub-zero. That is, the material actually starts to get thicker as we continue to increase the strain,” Devesh Mistry, one of the researchers, told Design News. “The liquid crystal groups are reordering with strain and changing their internal structure. Understanding that molecular structure is key to understanding why this Poisson ration is changing and how we can use that to create a material that starts with a negative Poisson ratio."

In a study published in Nature Communications the researchers note these so-called “auxetic materials” can be found in nature in the skin of cats, in human tendons, and in the protective layer inside the shells of mussels. The extreme toughness of these materials has prompted efforts to develop a synthetic version. Some examples of 3D printed auxetic structures have been demonstrated, but this latest development from the University of Leeds is the first manmade material that is inherently auxetic.

"We were interested in using patterned mechanical anisotropy to create materials which deform in specific ways for specific purposes,” Mistry said. Mistry is a physicist who was working at the School of Physics and Astronomy at Leeds when the discovery was made and is presently working at the University of Colorado. He was looking for materials that might be useful for flexible electronics or next-generation displays when he discovered this unique behavior.

“I found a material in the literature that I felt would work for our specific needs and then while studying its mechanical behavior we saw this very interesting and very bizarre behavior, which was completely unexpected, but has clearly caught the imagination of people,” Mistry said.

Liquid crystal elastomers are known to have interesting mechanical properties, such as anisotropy, or directional dependence, and have been studied for some time. Today they are are being used create thermally or photo-actuated devices.

It was previously understood that the spacing and patterning of liquid crystals could be programmed, but Mistry and his team wanted to do a more in-depth study, looking at how these materials deform and how they deform in different orientations. This auxetic behavior had been theoretically predicted, going back as far as 2003, but it has never been demonstrated.

The material has not yet been given a name. But for those chemists out there, this particular liquid crystal elastomer is based on acrylate chemistry.

Mistry said because of its similarity to biological tissue, this new material is considered a bio-reminiscent material, and could be well suited for artificial muscles as well as soft robotics. Other potential applications for materials such as these include footwear and body armor.